How do we rebuild the mental toughness of new troops while keeping with the military's new direction? 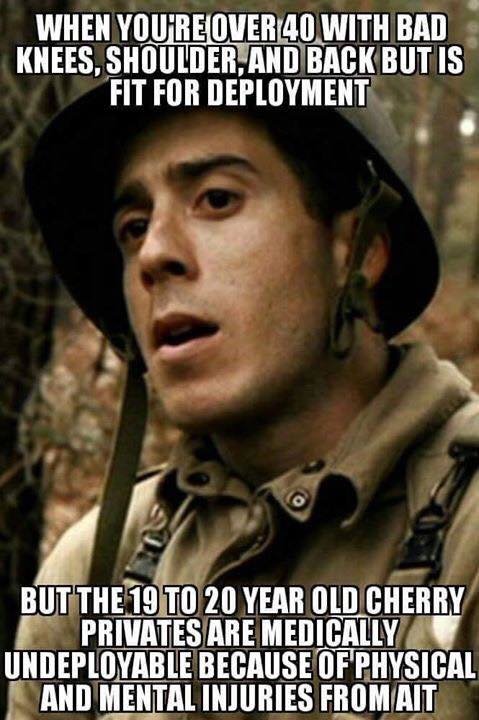 PTSD out of basic? Night terrors out of AIT? IG and EO complaints? Reports of "hazing" for being dropped for 20 push ups? How do we, as leaders, compensate for the decline of mental toughness in today's new recruits? How can we produce a quality product when we are expected to treat a new E1 with the same respect as an O10?
Posted in these groups:

SGM Barry Kindred
Posted 5 y ago
Out with the new and back to the old. We are war fighters not social experiments.
(63)
Comment
(0)

SGM William Heath
>1 y
SGM W. Heath, as I have told members of Congress the enemy is not gonna give a shot of a soldier id's stressed, they will torture the enemy or anyone else, if we cont to allow this pussy bull shot we are gonna have big issues with our soldiers, we don't make soldiers accountable for being wimps, and it's past time, we need to go back to our old ways and weed out these lil bitches that mom and daddy's raised! Very disappointed in our rules of training. Its time we bring back Motivational seminars and let the soldiers handle this shit like day's of old. Failure is an excuse, that needs to be handled. If we allow weakness then we will be weak. I think we should do away away with recycling, and make them know coming in that this ain't for all, and pursues need not apply!
(7)
Reply
(0)

LCpl Terry W Rollins
2 y
They need to return to the draft and back when the military turned out fighters, not whiners. Not speaking for any other branch, but the Marines did just that during Vietnam. The Marines didn't have as many draftees as the Army, but what came out of Marines Boot Camps did just that. I shipped over as a 2511, field wireman, didn't look forward to climbing poles or trees in the jungle, within a week I became a warrior with a radio on my back, humping the bush.
(3)
Reply
(0)

SGT Philip Roncari
Posted 5 y ago
I think that the raw material the Military gets today in this all volunteer Army is what the society of present day America is producing,everyone gets a trophy,cars for high school kids,no such things as curfews,and then they join the Military where civilized society as we know it ceases to exist,quite a culture shock to say the least,how to rebuild mental toughness in today's generation probably should start with mommy and daddy taking a little more time telling the kiddies the world is a tough place and everybody doesn't play well with others.
(37)
Comment
(0)
show previous comments

SMSgt Lawrence McCarter
11 mo
SSG Paul Headlee - I won't tell You I never overindulged in alcohol, I did and discovered it doesn't feel great to think and Army marched through Your mouth, Your head hurts and that just the start of the misery. Its not like You do all the smart things as a young guy, You don't, i should know. lol I did learn and its not I completely stopped but usually cut Myself off at two beer and don't have them often anyway. I'll still have a Mai Tai with Chinese food sometimes but only one. I still like a good scotch and every few months have one perhaps two. Then I may switch to a soft drink if I still want something. else. Guess I learned a few things over the years and in 40 years of full time Police work sure saw what happened to people that abused alcohol.
(1)
Reply
(0)

SSG Paul Headlee
11 mo
PFC Scottandkelly Godwin My dad knocked the crap out of me frequently. Being immature, I just thought he was mean. As I got older it became more and more clear that I had every one of those coming. He loved me enough to care and he cared enough to correct me in terms that I could understand. I'd be dead or in prison if it wasn't for him.
(1)
Reply
(0)

SSG Paul Headlee
11 mo
SMSgt Lawrence McCarter Absolutely! Now and for many years I spend my excess money on tools, guns, etc.; things that will tend to give decades of use. Alcohol just makes expensive urine.
(2)
Reply
(0)

SGM Steve Wettstein
Posted 5 y ago
CPO (Join to see) IMO it's from being coddled in today's, everyone gets a trophy, society.
(35)
Comment
(0)
show previous comments

SSgt Boyd Herrst
>1 y
When I came back from TDRL I was ready to step in and take charge again, and I got told they could say
No and ask to go see their “social-worker”. Seriously? I asked..
Seriously! Well maybe I overplayed it a bit. But it has seemed to have reached a boiling point these days.
We had a G.I. Party and we’re giving the kitchen a realky good going over.. don’t be telling them to do that.. you got to get right in there and scrub and scour too.. Well first I got to get them going in the ‘right direction’ once I do that I will get doing that Scouring thing..
My job is to lead/ direct.. kind of hard when I’m tied down myself..
got to keep them working ... and not malingering .. Well... don’t say we didn’t tell you, they said... a few tried to play some stuff.. the others got with it and did what they were told... those guys and I had a party after the party.. the whiners
Went and whined some more...
“Hey Sarge, where’s our pizza and beer, huh? I said these guys that stayed and did their job without whining got rewarded.. if you had done that.. you’d of got beer and pizza .. somebody told my top pizza I had to order them whiners a pizza and beer.. I got them the nastiest greeziest pizza and skankiest beer(they wanted their participation trophy.. they got it) I could get hold of..
after that they were too busy taking care of a personal prob to be complaining.. after that point.. when we had a G.I. Party, they were there and did their assigned detail..
no whining... I didn’t buy pizza and beer for participating I bought because my cooks did a fab job w/o complaint. With exception of those others.... I did it cause I wanted to show appreciation not because I had to.. i handle have to’s diffeeently aa you have read..
(2)
Reply
(0)

SMSgt Lawrence McCarter
11 mo
CPT Bob Coleman - Award for getting Your drivers license, thought the license was the award. I don't like all kinds of garbage to hang on a uniform anyway, I think it looks foolish, the less the better. I put more stock in being told I did a good job when i did a good job than some award. Being part of the team was the real reward and carrying Your own weight.
(1)
Reply
(0)
Show More Comments
Read This Next
RallyPoint Home