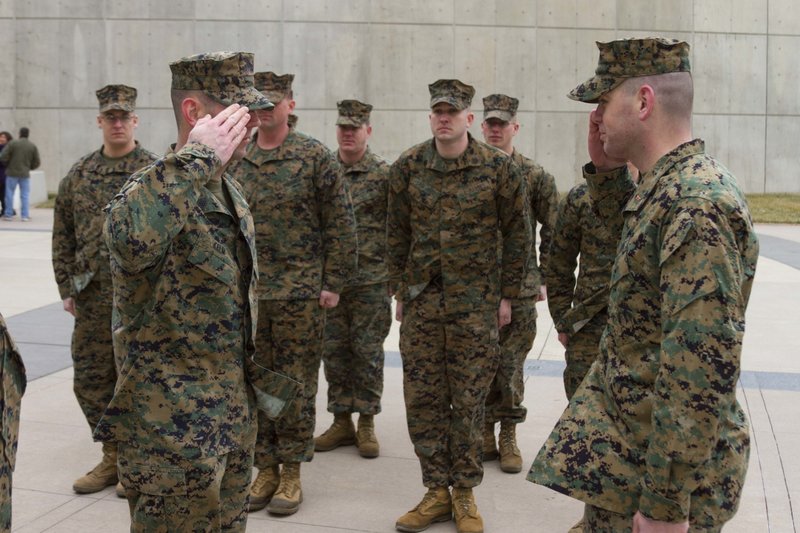 Not to piss more of you off about the "Should a 2LT salute a 1LT?" thread moving to the top of the most recent discussions every 5 seconds but I haven't thought about the Warrant Officers on this subject.

I'm just seeking your thoughts on this.
Posted in these groups:

Customs and Courtesies
Edited 6 y ago
Posted >1 y ago
Responses: 480

CW5 Michael Scheller
Posted 6 y ago
Hold on! What we are truly discussing is a professional exchange or greeting. I, a Warrant Officer, greet many professionals each day. Some are required by regulation to INITIATE the exchange (salute) with me while with others I must be the initiator. I do not simply salute a Lieutenant; he or she in return salutes me. I salute and greet enlisted and noncommissioned officers daily and am proud to do so.

Too many Soldiers, including some of my brethren Warrant Officers, look upon this as a burden instead of a friendly exchange that it truly is. This is similar to saying "good morning ma'am" to a lady I encounter at the grocery store. Initiating that greeting did not make me subordinate to her, however it did enhance my sense of pride in being a gentleman. I take similar pride in being a military professional and thus gladly initiate and return the salute when appropriate.
(731)
Comment
(0)
show previous comments

CW5 Sam B.
Edited >1 y ago
Posted >1 y ago
It is an ABSOLUTE YES on all accounts, yes warrant officers are commissioned, but the rank structure still places me below a LT (who usually for some reason calls me "sir") and above the CSM. Some folks try to place field grade on warrants, no such animal, but then the new OER places us there on the OER. This here Army is a confusing beast at times, but all warrants will salute a LT and if not, beware if I am around. SMOKED is what you will be!

caveat....when my daughter graduates USNA in 2016 she will out rank me after 30 years of service on her first day!

LTC Philip Marlowe
6 mo
CW3 Joseph Ernst Jr - CHIEF, previous to WOs being commissioned they were simply Warranted (statement of the obvious, obviously). Before the Military decided to "Commission" WOs, you never saw a WO as a commander or in just about any leadership role (they flew Rotary Wings, CID, Supply) and were pretty much the 'GO TO' for just about any issue in their particular career field. HOWEVER, the Military being the military, someone somewhere decided WOs need to LEAD and/or manage - in other words, assume the mantel of ACCOUNTABILITY (as well as responsibility). Back in the day, when the military held EM/NCO/WOs responsible for a FUBAR situation, under the UCMJ, they could only lose 1/2 one months base pay for two months as the result and not the actual cost associated with the event. However, commissioned officer were held accountability, which meant commissioned officers could be held 'accountable' for the entire COST of a FUBAR event (e.g. loss of property, et al - being fairly simplistic here and I'm sure a fmr JAG may jump in and get all technical). I can tell you NONE of the WOs I knew wanted anything to do with being commissioned and a lot of them fought it - HOWEVER, as is want to do, the military made up its own mind and said "hey, we're going to commission Warrant Officers so we can make them Leaders/Commanders and award them with accountability'. I know this is simplistic, but time/space permitting a reasonable explanation of how it went down...I'm POSITIVE there is myriads more to the 'story' of commissioned warrant officers.
(1)
Reply
(0)

CPT (Join to see)
3 mo
To be clear, legally all warrant officers are still technically junior officers. The distinction for whether a CW5 is “field grade” comes from a purely evaluation perspective. So for example regardless of which OER form they are evaluated with, a CW5 in command can only apply company grade NJP.
(0)
Reply
(0)

Cpl Timothy Wagner
13 d
I don’t agree. There is a 1 bar rule. Should there be a time? Yes in front of any star walking by. However, in my belief I think the 2nd and 1st LT’s should show a little more respect to all level of warrant officers. Not only has a warrant officer served his time as an enlisted but they have more experience in the field. Don’t let the mentality of “ oh I am an officer” get in the way of experience. That will get you and possibly a unit killed in battle. Experience first rank second.
(0)
Reply
(0)

CW5 (Join to see)
Posted 6 y ago
I saluted a 2LT on Thursday and he did not correct me. Case closed.
(238)
Comment
(0)
show previous comments

PO2 Buford Hart
11 mo
Yes you always render a salute to a higher rank no matter what or who ,that is proper military protocol.
(5)
Reply
(0)

SPC Albert Schafer
8 mo
I think I'm going over the hill/AWOL/deserting ... There are some pretty dumb questions
on this site so I'm going on permanent leave......
(4)
Reply
(0)