What do you think of the new Navy crackerjacks? 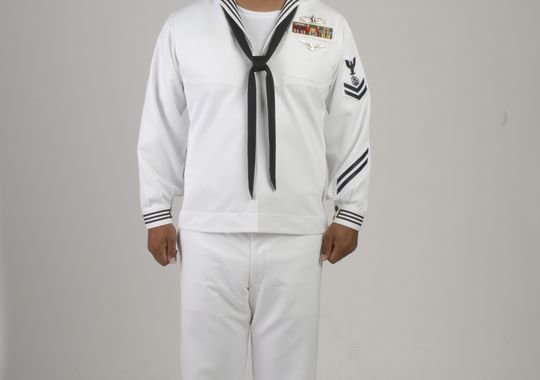 The good news: Officials have the money for the long-awaited reboot of dress whites and dress blues.

The bad news: The money isn't available until 2016.

Men and women, E-6 and below, will be able to buy the service dress blues at the Navy Exchange in early 2016, said Capt. Janet Bristol, head of the Uniform Matters Office. The uniforms are likely to be issued to recruits beginning Oct. 1, 2016, the start of fiscal year 2017. Funding for the crackerjack whites is earmarked for fiscal 2017.

"We are definitely going forward with it," she said in a recent interview. "We are still formalizing some of our final decisions on the timing and rollout schedule, but the funding is in place, the uniforms will be coming and I think the sailors will enjoy the new features."

The dress blues sport sure-to-be popular updates like a front zipper on the trousers that renders the 13 buttons purely decorative, and a side zipper on the blouse. The dress whites are set for the largest redesign in decades and will have tailored cuffs and piping that matches the blues. But not all changes are being well-received: Many female sailors complain that the "Dixie cup" is easily stained by makeup and doesn't fit hair buns.

Read the full story here: http://www.navytimes.com/story/military/careers/2015/04/20/crackerjacks-sdw-sdb-new-uniforms-navy/21340721/
Posted in these groups:

PO1 (Join to see)
Posted 7 y ago
I was one of "those sailors" that petitioned the SecNav to get our crackerjacks back in the first place. I put my "special order" in the very day we were authorized. Crackerjacks beat the hell out of any uniform the Navy had at the time, and even today. I hated looking like a milkman or some assinine version of the Air Force. Frankly, the current "uniform" - the digital baby blues - well, they suck dog balls and I've informed any and all that bring up the subject on that piss-poor choice of uniform for our sailors. We are not, in general, a ground force, so I don't particularly care if our sailors look the same as the Army or Marines. We are sailors - we go to sea in ships - and ships are meant to go in harm's way without the support of the Army. Give me a few good Sea Corporals to place stategically in the yardarms and weigh anchor.
(25)
Comment
(0)
show previous comments

PO2 Robert Cuminale
7 y
PO2 Burling I was transferred to a Public Works department in 71 and decided to wear dungarees, chambray shirt and dixie cup. So much easier than all the junk you had to do with Greens. No blousing springs, no starched 8 point cap. (I still have he turnbuckle form) no collar devices. All Seafarers that came out of the dryer ready to wear.
We got a Master Chief Utlitiesman in who had 42 years of service. So much gold on his arm I don't know how he lifted it. He got this idea of all BEES wearing Greens to establish esprit de corps for the men who had never been to a battalion. I refused for the reasons given. He was insisting until I handed him the Plan Of The Day. Nowhere did it say ship's company was to wear Greens. It specified what I was already wearing for E-6 and below. We were not part of a battalion. He accepted my argument and started wearing Khakis. I hadn't said anything but he was the one not in proper uniform. He was a top notch guy.
(0)
Reply
(0)

CAPT Charles Weishar
7 y
Having proudly worn the white uniform when I was an enlisted man, I appreciate the "dressing up" of the proposed, new version with the striping on the collar and wrists.
(1)
Reply
(0)

PO2 Robert Aitchison
7 y
MM1 Monroe they only wear the white hat (dixie cup) for dress uniforms now. For all other uniforms they wear either a ball cap or cunt cap.
(0)
Reply
(0)

SSG Paul Headlee
2 y
My dad had some stories about when the Army Air Corps became the Air Force and the subsequent new uniforms. Most continued to use their Army uniforms up until the wear out date because airmen wearing the new uniforms kept getting questioned by random civilians about bus schedules.
(0)
Reply
(0)

CWO2 John Markiewicz
Edited 7 y ago
Posted 7 y ago
It seems like every Master Chief of the Navy nowadays along with every CNO decides that the highest priority thing for them to do is put their name on a uniform change. Uniform changes have a serious impact on the deckplate sailors and officers and should not be changed every time we get some new leadership in the pentagon - this latest change takes it back to what it was some time before I joined the Navy back in 1961 (and that is probably a good thing except it is perceived as yet another uniform change). The, so called, Cracker Jack uniform was the Navy standard for enlisted for many many years along with the plain old dungaree working uniform. The crazy notion to put our sailors in some sort of weird blue camouflage uniform as a working uniform is just that (crazy). Camouflage uniforms have a purpose and that purpose is not sailing around the oceans on ships and submarines. Now that is a uniform that needs to be brought back to reality if the MCPON and CNO just can't let themselves leave the uniforms alone.
(20)
Comment
(0)
show previous comments

CMDCM Gene Treants
7 y
Sorry CWO2 John Markiewicz, but my wife finally figured out the real reason for the switch from dungarees to the Navy Cammies. If our Sailors fall overboard, sharks have a harder time finding them. I joined in 1966 and hated that I was to late to get issued and authorized to wear a Flat Hat. That made so much more sense that a Dixie Cup, especially with Blues. Undress Blues NEVER made any sense, but we had to wear them after 1600 or not eat on the mess decks for evening chow in port. Dress Whites and Undress Whites - Neckerchief and Ribbons was the ONLY difference, big deal; this version of Dress Whites looks so much better to me.
(1)
Reply
(0)

PO1 Chris Tyrrell
7 y
Nothing says good idea like putting water colored camo on a guy that could go overboard and then be in water when the whole ship/boat has to visually spot him to save his life, like Glenn said. Unless of course there do happen to be sharks near by I guess haha.
(1)
Reply
(0)

PO2 Danny Bott
7 y
sorry meant to share a picture and now dont know how to delete this.
(0)
Reply
(0)

PO2 (Join to see)
Posted 7 y ago
Ok we are putting more money toward uniforms yet again, but no SRB's for most rates, cuts in bah and bas, cuts in manning, cuts all across the board but we are spending money on uniforms, let's stay with what we have and keep advancing are force in what we can do, not by how we look.
(18)
Comment
(0)
Show More Comments
Read This Next
RallyPoint Home