My Amazon Warrior Story: An army officer breaking barriers & jumping at new challenges while following the footsteps of my pioneering aunt 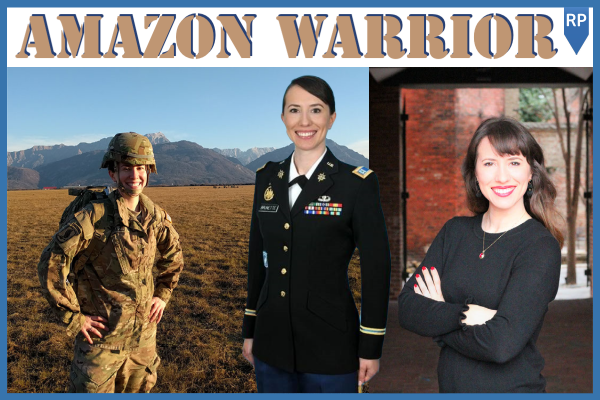 One big reason I applied to West Point was to see if I could top my brothers’ already significant educational accomplishments by becoming the first female in my family to graduate from a U.S. service academy.

I was also inspired by the example of my great-aunt Elizabeth “Betty” Constantino, a Navy lieutenant and linguist in the Naval Intelligence Division during World War II. I was named after and have always looked up to this female military pioneer, who lent her talent in languages to the Allied effort to defend democracy.

Like my great-aunt, I leaned into foreign languages at West Point, as well as international relations. On May 26, 2012, I commissioned as a military intelligence officer in the U.S. Army, at the rank of second lieutenant.

I had orders to join a unit based in Italy. Within two weeks of arriving in Italy, however, I deployed to Afghanistan with 173rd Airborne Brigade Combat Team. I was the first person in my West Point class to deploy to either combat zone after graduation. In Afghanistan, I would earn my combat patch, which I proudly wear on my right shoulder.

Over 10 years in the military, I rose from the rank of lieutenant to captain. I learned to lead with confidence during times of stress and chaos and — sometimes literally — jumped at the chance to take on challenges. I wanted to own my story, and break new ground like great-aunt Betty.

Initially I led a platoon of 40 soldiers, and was second in a command of a 120-person intelligence company that supported a 3,500-strong infantry brigade of U.S. and allied partners. In deployments across Europe during a time of international upheaval, I served as an intelligence officer at multiple levels for a 500-person organization.

After getting my airborne wings, I attended jumpmaster school, eventually becoming one of the first female jumpmasters, certified to teach, train and prepare paratroopers for airborne operations anywhere in the world within 18 hours.

At Fort Benning, Georgia, I challenged myself again, attending the U.S. Army Maneuver Captain’s Career Course, which only by 2016 had started admitting women. Despite having not been in combat arms, I became an honor graduate of the course.

In the military, I formed skills and instincts that serve me well in my civilian career at Amazon, where I’ve worked since 2018 as one of the 45,000-plus U.S.-based military- or Veteran-affiliated personnel. It’s no surprise Amazon is committed to hiring 100,000 more Veterans and military spouses by 2024, and I’m thrilled to assist in that effort by sharing my experiences at the company, where I still serve as a military intelligence reserve officer.

Amazon hired me through the Amazon Military Leaders program, called Pathways. As an operations manager, I led 200 people in Amazon’s fulfillment operations. In 2018, I started a week before Prime Day, and had to learn the new operation quickly! In the military, you learn to make it work.

I was next promoted to a site leader at an Amazon AMXL fulfillment center, staging shipments of extra-large equipment like treadmills and stationary bikes. I took over as the site leader two weeks before COVID-19 shuttered many people indoors, and when orders for home office and exercise equipment and other bulky items would skyrocket. How would I keep my team safe and socially distanced and lift and move and ship larger products? In the military, you learn to problem solve.

Now, as senior manager for Amazon Global Air, I serve on the board of directors of the Warriors at Amazon affinity group, which I recently expanded to support our broadening global community of military-affiliated personnel.

I also work with many former service members at Amazon Global Air, where we hire a high percentage of Veterans who served in branches of the military–including many logisticians, loadmasters and those with skills in ground handling and transportation operations.

If you’re transitioning out of the military and are considering a position at Amazon, here’s my advice:

Own your career development. No one pushed me out of an airplane — I decided to jump. Your post-military career is in your hands, and you own your story. Figure out what you want to do, and how you’re going to achieve your goals. Research job opportunities. Obtain counsel from family, friends, peers in the military and Veteran community, and supervisors and mentors. At the end of the process, make the decision that’s best for you.

Network. Use LinkedIn and RallyPoint to reach out to others who can provide career connections and advice in translating your military skills into civilian language.

Access resources. Take advantage of Amazon’s webinars and recruiting events for tips on applying for jobs and to get connected to recruiters.

Are you a Warrior in Transition? See if a career at Amazon works for you.

Read about Amazon’s pledge to hire 100,000 Veterans and military spouses by 2024: https://www.aboutamazon.com/news/workplace/amazon-will-hire-100-000-veterans-and-military-spouses-by-2024.

Women in the Military
Posted 9 mo ago
Responses: 11

1SG Dan Capri
Posted 9 mo ago
Congrats, Hooah and Airborne Sister .... This is outstanding and a great experience, achievement and foundation for you to build your career on. Continue to march, remember to take nothing for granted, look, listen and learn from your NCO's... Mission first, troops always. . God Bless....AATW!!.....GERONIMO!!
(12)
Comment
(0)

SGT (Join to see)
Posted 9 mo ago
Good for you MAJ (Join to see) !
(8)
Comment
(0)
Show More Comments
Read This Next
RallyPoint Home