Citation: Specialist Four Alfred Rascon, distinguished himself by a series of extraordinarily courageous acts on 16 March 1966, while assigned as a medic to the Reconnaissance Platoon, Headquarters Company, 1st Battalion (Airborne), 503rd Infantry, 173d Airborne Brigade (Separate). While moving to reinforce its sister battalion under intense enemy attack, the Reconnaissance Platoon came under heavy fire from a numerically superior enemy force. The intense enemy fire from crew-served weapons and grenades severely wounded several point squad soldiers. Specialist Rascon, ignoring directions to stay behind shelter until covering fire could be provided, made his way forward. He repeatedly tried to reach the severely wounded point machine-gunner laying on an open enemy trail, but was driven back each time by the withering fire. Disregarding his personal safety, he jumped to his feet, ignoring flying bullets and exploding grenades to reach his comrade. To protect him from further wounds, he intentionally placed his body between the soldier and enemy machine guns, sustaining numerous shrapnel injuries and a serious wound to the hip. Disregarding his serious wounds he dragged the larger soldier from the fire-raked trail. Hearing the second machine-gunner yell that he was running out of ammunition, Specialist Rascon, under heavy enemy fire crawled back to the wounded machine-gunner stripping him of his bandoleers of ammunition, giving them to the machine-gunner who continued his suppressive fire. Specialist Rascon fearing the abandoned machine gun, its ammunition and spare barrel could fall into enemy hands made his way to retrieve them. On the way, he was wounded in the face and torso by grenade fragments, but disregarded these wounds to recover the abandoned machine gun, ammunition and spare barrel items, enabling another soldier to provide added suppressive fire to the pinned-down squad. In searching for the wounded, he saw the point grenadier being wounded by small arms fire and grenades being thrown at him. Disregarding his own life and his numerous wounds, Specialist Rascon reached and covered him with his body absorbing the blasts from the exploding grenades, and saving the soldier's life, but sustaining additional wounds to his body. While making his way to the wounded point squad leader, grenades were hurled at the sergeant. Again, in complete disregard for his own life, he reached and covered the sergeant with his body, absorbing the full force of the grenade explosions. Once more Specialist Rascon was critically wounded by shrapnel, but disregarded his own wounds to continue to search and aid the wounded. Severely wounded, he remained on the battlefield, inspiring his fellow soldiers to continue the battle. After the enemy broke contact, he disregarded aid for himself, instead treating the wounded and directing their evacuation. Only after being placed on the evacuation helicopter did he allow aid to be given to him. Specialist Rascon's extraordinary valor in the face of deadly enemy fire, his heroism in rescuing the wounded, and his gallantry by repeatedly risking his own life for his fellow soldiers are in keeping with the highest traditions of military service and reflect great credit upon himself, his unit, and the United States Army.

Posted from nightscribe.com
Posted in these groups:

LTC Stephen F.
Edited 6 y ago
Posted 6 y ago
Thanks for honoring SPC Alfred Rascon who displayed uncommon valor as a medic on 16 March 1966 in the Republic of Vietnam COL Mikel J. Burroughs.
He certainly displayed selfless service to his fellow soldiers by shielding the with his own body from repeated grenade blasts.
(7)
Comment
(0) 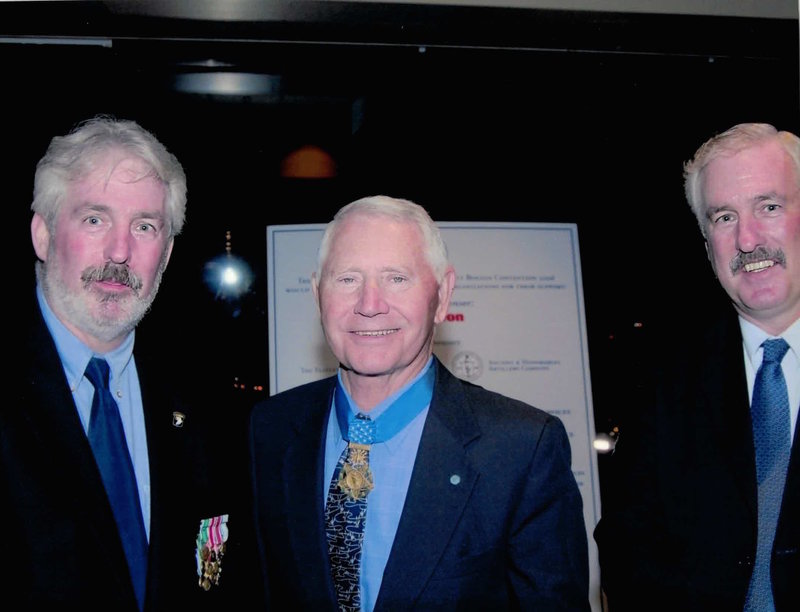 Thank you for sharing COL Mikel J. Burroughs. Colonel Rascon also did a second tour in Vietnam after receiving the Medal and also served in Iraq and Afghanistan. He really is quite a man.

I had the privilege of meeting two MOH recipients when I was stationed at Fort Hood after I returned from Vietnam and when I volunteered at one of their conventions I was in a room filled with greatness. I will always be in awe of the medal and the men who received it going back to the Civil War. I have this picture on my office wall, Colonel Leo Thorsness, myself on the left and my twin brother on the right. My twin brother and I served in Vietnam five years after Colonel Rascom performed his heroic deeds and Colonel Thorsness is thanking us for our service. He has it the other way around! I would love to meet Colonel Rascon.
(6)
Comment
(0)