The Battle of Loos was a battle that took place from 25 September – 8 October 1915 in France on the Western Front, during the First World War. It was the biggest British attack of 1915, the first time that the British used poison gas and the first mass engagement of New Army units. The French and British tried to break through the German defences in Artois and Champagne and restore a war of movement. Despite improved methods, more ammunition and better equipment, the Franco-British attacks were contained by the German armies, except for local losses of ground. British casualties at Loos were about twice as high as German losses...
25 September Edit

Map, Hohenzollern Redoubt, October 1915
In many places British artillery had failed to cut the German wire in advance of the attack.[6] Advancing over open fields, within range of German machine guns and artillery, British losses were devastating.[7] The British were able to break through the weaker German defences and capture the town of Loos-en-Gohelle, mainly due to numerical superiority. Supply and communications problems, combined with the late arrival of reserves, meant that the breakthrough could not be exploited. Haig did not hear until 10:00 a.m. that the divisions were moving up to the front. French visited Haig from 11:00 to 11:30 a.m. and agreed that Haig could have the reserve but rather than using the telephone he drove to Haking's headquarters and gave the order at 12:10 p.m. Haig then heard from Haking at 1:20 p.m. that the reserves were moving forward.[5]

26–28 September
When the battle resumed the following day, the Germans had recovered and improved their defensive positions. British attempts to continue the advance with the reserves were repulsed.[8] Twelve attacking battalions suffered 8,000 casualties out of 10,000 men in four hours.[5] French told Foch on 28 September, that a gap could be "rushed" just north of Hill 70, although Foch felt that this would be difficult to co-ordinate and Haig told him that the First Army was in no position for further attacks.[9] A lull fell on 28 September, with the British having retreated to their starting positions, having lost over 20,000 casualties, including three major-generals.[a]

Air operations
The Royal Flying Corps (RFC) came under the command of Brigadier-General Hugh Trenchard.[10] The 1st, 2nd and 3rd wings under Colonels E. B. Ashmore, John Salmond and Sefton Brancker participated. As the British were short of artillery ammunition, the RFC flew target identification sorties prior to the battle, to ensure that shells were not wasted.[11] During the first few days of the attack, target-marking squadrons equipped with better wireless transmitters, helped to direct British artillery onto German targets.[12] Later in the battle, pilots carried out a tactical bombing operation for the first time in history. Aircraft of the 2nd and 3rd wings dropped many 100-pound (45 kg) bombs on German troops, trains, rail lines and marshalling yards.[13] As the land offensive stalled, British pilots and observers flew low over German positions, providing target information to the artillery.[14]

From what I can ascertain, some of the divisions did actually reach the enemy's trenches, for their bodies can now be seen on the barbed wire.

— Rawlinson[5]
Major-General Richard Hilton, at that time a Forward Observation Officer, said of the battle:

A great deal of nonsense has been written about Loos. The real tragedy of that battle was its nearness to complete success. Most of us who reached the crest of Hill 70, and survived, were firmly convinced that we had broken through on that Sunday, 25th September 1915. There seemed to be nothing ahead of us, but an unoccupied and incomplete trench system. The only two things that prevented our advancing into the suburbs of Lens were, firstly, the exhaustion of the "Jocks" themselves (for they had undergone a bellyfull of marching and fighting that day) and, secondly, the flanking fire of numerous German machine-guns, which swept that bare hill from some factory buildings in Cite St. Auguste to the south of us. All that we needed was more artillery ammunition to blast those clearly-located machine-guns, plus some fresh infantry to take over from the weary and depleted "Jocks." But, alas, neither ammunition nor reinforcements were immediately available, and the great opportunity passed.

— Richard Hilton[15]
The twelve attacking battalions suffered 8,000 casualties out of 10,000 men in four hours.[5] French had already been criticised before the battle and lost his remaining support in the government and army, because of the British failure and that he was responsible for poor handling of the reserve divisions.[16] French was replaced by Haig as Commander-in-Chief (C-in-C) of the British Expeditionary Force (BEF) in December 1915.[17]

Casualties
British casualties in the main attack were 48,367 and they suffered 10,880 more in the subsidiary attack, a total of 59,247 losses of the 285,107 British casualties on the Western Front in 1915.[18] J. E. Edmonds, the British Official Historian, gave German losses in the period 21 September – 10 October as c. 26,000 of c. 141,000 casualties on the Western Front during the autumn offensives in Artois and Champagne.[19] In Der Weltkrieg, the German official account, losses of the German 6th Army are given as 29,657 to 21 September; by the end of October losses had risen to 51,100 men and total German casualties for the autumn battle (Herbstschlacht) in Artois and Champagne, were given as 150,000 men.[20]

Subsequent operations
3–13 October Edit
Main article: Actions of the Hohenzollern Redoubt
The Germans made several attempts to recapture the Hohenzollern Redoubt, which they accomplished on 3 October.[21] On 8 October, the Germans attempted to recapture much of the remaining lost ground by attacking with five regiments around Loos and against part of the 7th Division on the left flank. Foggy weather inhibited observation, the artillery preparation was inadequate and the British and French defenders were well prepared behind intact wire. The German attack was repulsed with 3,000 casualties but managed to disrupt British attack preparations, causing a delay until the night of 12/13 October.[22][23] The British made a final attack on 13 October, which failed due to a lack of hand grenades.[24] Haig thought it might be possible to launch another attack on 7 November but the combination of heavy rain and accurate German shelling during the second half of October persuaded him to abandon the attempt.[25] " 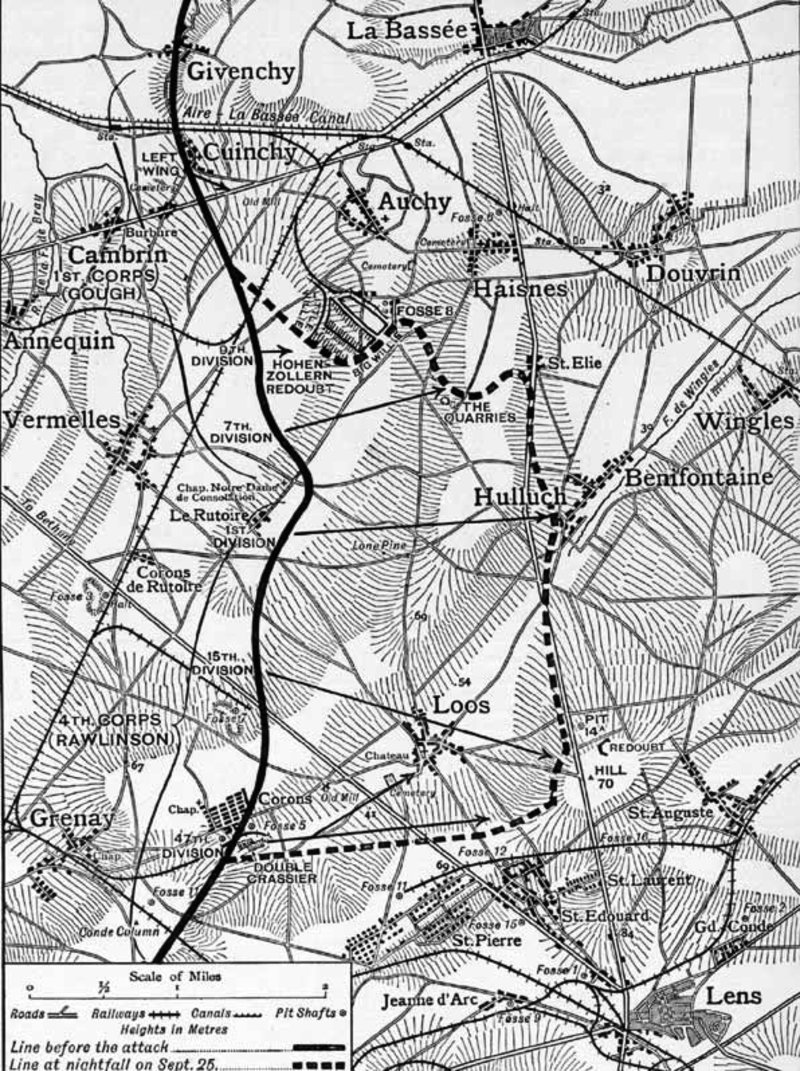 SGT (Join to see) thanks for the historical read/share of the Battle of Loose during WWI. Wow 85K casualties from England. This is the first time I have heard of this battle.

Lt Col John (Jack) Christensen
Posted 3 y ago
Great WWI history share. Have to admit to not knowing much about this war.
(2)
Comment
(0)