Lt Col Charlie Brown
699
48
8
12
12
0
I suggest all small business owners in this situation declare bankruptcy and walk away not just from the city but perhaps from the state and start again elsewhere. 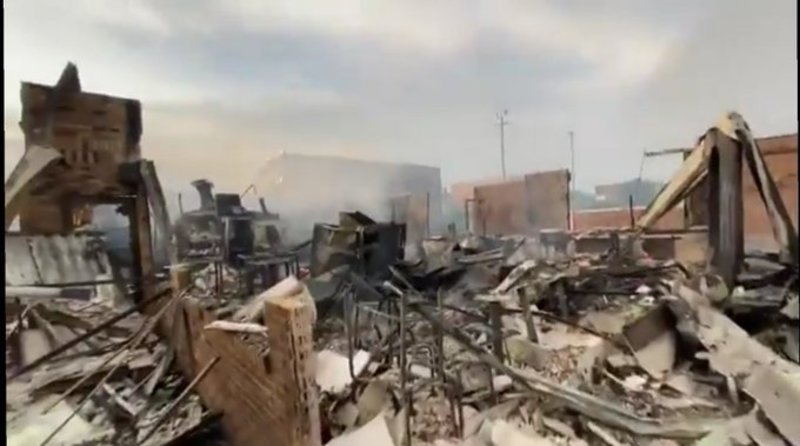 Posted from thegatewaypundit.com
Posted in these groups: 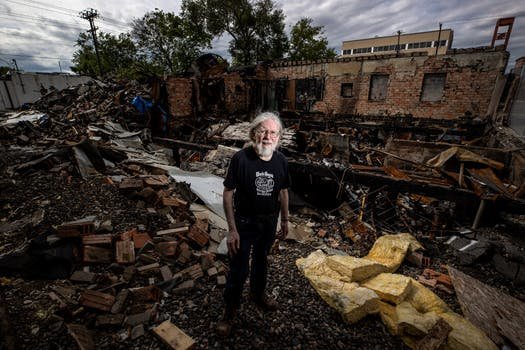 Thank you my friend Lt Col Charlie Brown for posting.
Most localities don not seem to have riot clauses for business damage [I expect Watts District in LA does :-)] The issue is keeping tax payments up-to-date.

The issue does not seem to be a democrat versus republican issue, since St Paul MN began issuing demotion permits soon after local riot damage.

It seem to be a Minneapolis issue. I concur that businesses should move out of Minneapolis as quickly as they can. This should begin with businesses that were not damaged AND do not support BLM IMHO.

Images
1. Don Blyly stood on the ruins of Uncle Hugo's Science Fiction & Uncle Edgar's Mystery Bookstores on S. Chicago Avenue in Minneapolis on Wednesday.
2.With bricks and burned timbers removed, the owner of Lloyd’s Pharmacy in St. Paul expects construction to start later this month.
3. Jim Stage, owner of Lloyd's Pharmacy in St. Paul, shown in July as he became emotional while testifying at a Minnesota Senate hearing.

1. Minnesota has provisions for COVID
I spent a little time looking into this. Difficult finding trustworthy sources.
From {[revenue.state.mn.us/penalty-abatement-businesses]}
You may ask us to abate (cancel) late-payment or late-filing penalties or interest if you have a reasonable cause or are negatively affected by the COVID-19 pandemic.
Circumstances that may support your request include if you:
Have a significant interruption of your business or employment and cannot manage it with insurance or other financial resources"


2. https://www.startribune.com/mpls-keeps-landscape-of-rubble-as-city-wants-taxes-before-permit/572091782/
Landscape of rubble persists as Minneapolis demands taxes in exchange for permits
In St. Paul, officials have waived the tax rule so property owners can clean up.
In Minneapolis, on a desolate lot where Don Blyly’s bookstore stood before being destroyed in the May riots, two men finish their cigarettes and then walk through a dangerous landscape filled with slippery debris and sharp objects. The city won’t let Blyly haul away his wreckage without a permit, and he can’t get a contractor to tell him how much it will cost to rebuild the store until that happens.

In St. Paul, where Jim Stage’s pharmacy burned down during the same disturbances, crews have already removed the bricks and scorched timbers. A steel fence keeps out trespassers. Stage expects construction of his new Lloyd’s Pharmacy to begin later this month.

The main reason for the different recoveries is simple: Minneapolis requires owners to prepay the second half of their 2020 property taxes in order to obtain a demolition permit. St. Paul does not.

“Minneapolis has not been particularly friendly toward business for some time,” said Blyly, who prepaid $8,847 in taxes last week but still hasn’t received his demolition permit. “They say they want to be helpful, but they certainly have not been.”

City officials say their hands are tied, pointing to a state law that prohibits the removal of any structures or standing timber until all of the taxes assessed against the building have been fully paid.

The law, however, leaves enforcement to the county, and Hennepin County officials said they made it clear to the city of Minneapolis this summer that they would not enforce the requirement for any riot-damaged properties.

Local business owners are appalled by the finger-pointing, noting that nearly 100 properties in Minneapolis were destroyed or severely damaged in the riots following the death of George Floyd. The vast majority of those properties are either still standing or have been turned into ugly and often dangerous piles of rubble. Owners say the lack of progress is discouraging reinvestment and sending customers to other parts of the metro.

Cleaning up that mess is expensive. Most property owners must pay $35,000 to $100,000 to clear their sites of debris, with larger tracts — such as strip shopping centers — costing as much as $400,000, according to property owners. That doesn’t include the money those owners must pay to get their permits. On average, the owners of properties destroyed or significantly damaged owe $25,000 in taxes for the second half of 2020, which come due in October, according to a Star Tribune review of county property records.

“When it first hit my desk, I was flabbergasted that this was a requirement,” said developer David Wellington, whose family owns several properties that were destroyed in the riots. “We need to make noise for people who really need the help and, frankly, it isn’t us.”

In Wellington’s case, the family paid $188,944 in property taxes to get a demolition permit for their Hi-Lake Shopping Center, which was hit by three or four fires that gutted the property. Wellington said his company has deep pockets, so that wasn’t a major hardship. But he said many property owners lost their only source of income to the riots and the pandemic, leaving them unable to comply with the city’s rules.

“People are suffering pretty dramatically, so this is a considerable ask,” Wellington said.

Other investors worry about public safety. Basim Sabri, owner of Karmel Mall and other real estate on or near Lake Street, said he has filed three complaints with the city in recent weeks about safety hazards in the neighborhood.

“You can’t just allow a bunch of rubble and hazardous material to sit in the middle of Lake Street,” Sabri said. “People could get hurt. Where are our City Council members? What are they doing? Have they seen it?”

Minneapolis City Council Member Andrew Johnson agreed it is “outrageous” to require property owners to pay thousands of dollars in taxes to obtain a demolition permit.

“Nobody at the city wants to hold up these demolitions,” Johnson said. “We have been looking at every angle to try and help property owners out.”

Johnson said he has asked city workers to look for evidence that a property is a public health hazard, which would qualify it for expedited demolition and waive the property tax requirement. The city also has told property owners they don’t need to survey their lots as part of the demolition process, which can save them a few thousand dollars, said Steve Poor, the city’s director of development services.

Poor said he met with officials from Hennepin County a few weeks ago, after property owners asked if they could have the property tax requirement waived.

“They said they will not sign off on a wrecking form unless they are satisfied, and they said satisfied means the taxes are paid in full,” Poor said.

Hodge, however, said the county also told city officials that Minneapolis could approve the demolition permits without any input from the county.

“It is up to them to decide whether they need to involve us,” Hodge said. “But if they choose not to involve us, we are not going to take offense.”

Johnson said he will ask Hennepin County officials to put their position on the matter in writing, since it contradicts an e-mail received from the county in June. The city has yet to approve more than half of the 27 demolition permits that have been requested since the riots, records show.

In St. Paul, officials have been issuing demolition permits in as little as a week, records show. City officials said the only reason they would hold up or deny a demolition permit is if a contractor was not properly licensed for the work.

City spokeswoman Suzanne Donovan said staffers within the Department of Safety and Inspections have tried to expedite demolition permits “to help accelerate construction that needs to take place to ensure commerce moves forward in St. Paul.”

Stage said he would have thought twice about rebuilding in St. Paul if the city had asked him to prepay $11,793 in property taxes when he applied for a demolition permit in June.

“It would have been a little insulting, considering the circumstances,” said Stage, who paid $65,000 to remove the rubble left from the destruction of Lloyd’s Pharmacy. “I’d say, ‘Do you really want us to build back in your city?’ That’s how it makes you feel.”

In St. Paul, officials have waived the tax rule so property owners can clean up.

SGT Robert Pryor
Posted 2 y ago
Disgusting, especially when it was the trash politicians that allowed this to happen in the first place.
(9)
Comment
(0)

Cpl Benjamin Long
Posted 2 y ago
What are they going to pay them with, there is nothing left... Then eventully the city's security forces won't be able to pay thier police and and Minneapolis won't even have an army to rule a service tent... That means anything they say will get smashed by the law of the bigger fish
(7)
Comment
(0)
Show More Comments
Read This Next
RallyPoint Home