Maj Marty Hogan
1.52K
56
7
18
18
0
Howard William Cosell (/koʊˈsɛl/; born Howard William Cohen; March 25, 1918 – April 23, 1995) was an American sports journalist and author, who was prominent and influential on radio, television and print media from the early 1960s into the mid 1980s. He was also an actor who played minor roles in several TV programs and movies. Cosell was widely known for his blustery, confident personality.[1] Cosell said of himself, "Arrogant, pompous, obnoxious, vain, cruel, verbose, a showoff. There's no question that I'm all of those things."[2] In its obituary for Cosell, The New York Times described Cosell's effect on American sports coverage: "He entered sports broadcasting in the mid-1950s, when the predominant style was unabashed adulation, [and] offered a brassy counterpoint that was first ridiculed, then copied until it became the dominant note of sports broadcasting."[3] 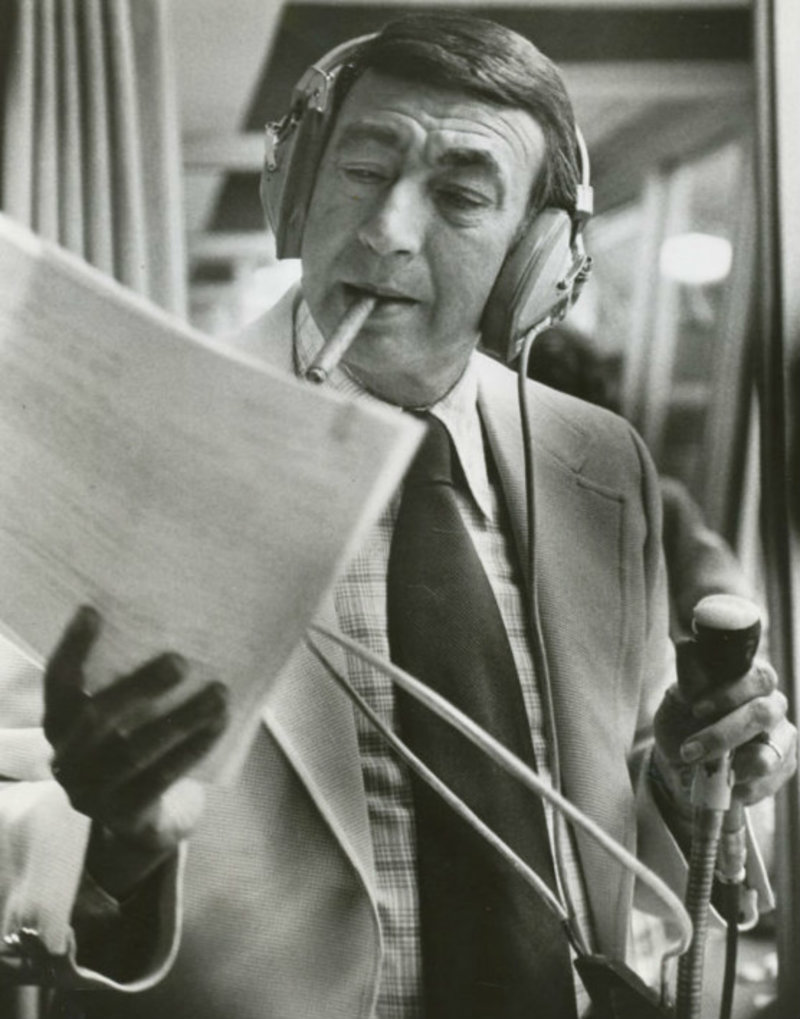 Thank you, my friend Maj Marty Hogan for making us aware that March 25 is the anniversary of the birth of American sports journalist Howard William Cosell who was widely known for his blustery, cocksure personality. He was a major in the U.S. Army Transportation Corps during World War II.
Rest in peace Howard William Cosell!

Background from washingtonpost.com/wp-srv/sports/longterm/memories/1995/95pass12.htm
"Howard Cosell Dies at 77 By Leonard Shapiro
Washington Post Staff Writer
April 24, 1995
Howard Cosell, who was one of the first network television sports announcers to, in his own words, "tell it like it is," died yesterday morning at New York University's Hospital for Joint Diseases in New York City. He was 77.

A grandson, Justin Cohane, said Cosell died of a heart embolism, according to the Associated Press. Cosell had been in ill health since he was diagnosed with cancer in 1991. In recent years, he had suffered a series of strokes that weakened his heart, limited his mobility and confined him to his apartment on Manhattan's East Side.

A lawyer by training, Cosell was arguably the best-known and most controversial sports broadcaster in the history of the medium, attacking the hottest subjects and helping attract a huge audience to ABC's "Monday Night Football." He was a lightning rod for criticism.

From the early 1960s, when he first began to attract national attention, until his bitter departure from ABC television in 1985, Cosell frequently tackled the toughest issues in sport. He initially made his reputation as a staunch defender of boxer Muhammad Ali when the heavyweight champion was stripped of his title in 1967 for refusing to be inducted into the Army during the Vietnam War.

"Howard Cosell was a good man and he lived a good life," Ali told the Associated Press after hearing of Cosell's death. "I have been interviewed by many people, but I enjoyed interviews with Howard the best. I hope to meet him one day in the hereafter. I can hear Howard now saying, Muhammad, you're not the man you used to be.' "

Cosell was a vocal critic of baseball's reserve clause, which before the advent of free agency bound a player to one team. He railed over brutality and corruption in boxing, the cheating and academic abuses of college sports, the rampant commercialism and alleged hypocrisy in the Olympic movement. He also wrote four best-selling books.

He was described over the years as a social phenomenon, a broadcaster and crusading journalist who broke the pretty-face, perfect-hair, former-jock mold of network sports personalities with his unique style and delivery. Writer Frank Deford, in a 1983 Sports Illustrated profile, observed:

"He is not the one with the golden locks or the golden tan, but the old one, shaking, sallow and hunched, with a chin whose purpose is not to exist as a chin but only to fade so that his face may, as the bow of a ship, break the waves and not get in the way of that voice."

Cosell reserved his harshest rhetoric -- on and off the air -- for racism any time he encountered it.

Cosell handled a wide variety of assignments for ABC, but was particularly renowned for his work as a boxing blow-by-blow announcer and as the pot-stirring third man in the booth on "Monday Night Football" from the inception of the landmark series in 1970 to his departure before the 1984 season, when he claimed the NFL had "become a stagnant bore."

The last fight he worked for ABC was a bloody bout in December 1982 between then-heavyweight champion Larry Holmes, who savagely whipped challenger Randall "Tex" Cobb. "I am tired of the hypocrisy and sleaziness of the boxing scene," he said at the time. He never did another fight.

In 1985, after writing an autobiography that was highly critical of many of his colleagues at ABC Sports, the network canceled his award-winning but short-lived "Sportsbeat" show after three months. Cosell retreated to the radio booth, where he started his broadcast career in 1953.

Cosell continued to do a daily sportscast, "Speaking of Sports," and a weekly 30-minute interview program, "Speaking of Everything," on ABC radio before retiring in early 1992 after surgery in June 1991 to remove a cancerous tumor from his chest. In recent years, he declined to see many of his friends and former colleagues at ABC and refused numerous requests to appear in public.

In mid-February, he was honored with the Arthur Ashe Award for Courage at the ESPN-sponsored ESPY ceremonies. He did not attend; his friend, comedian Bill Cosby, accepted the award for him.

At the height of his popularity, Cosell may have been the most imitated voice in America, the focus of countless conversations at the office water cooler and a source of material for stand-up comedians coast-to-coast. And what a voice he had. All Brooklyn bile and "New Yawk" nasal, with a thick accent rarely heard at the highest levels of network television before his arrival. He also wore a toupee in all of his public appearances. He failed in an attempt to host his own variety show, but frequently made appearances on talk shows and once hosted and acted in several skits on "Saturday Night Live."

"He is the only broadcaster in America who can be the promoter, the reporter and the critic of an event packaged and merchandised by his own network," Robert Lipsyte wrote in his 1975 book, "SportsWorld." "Cosell is the franchise. He may also be the most valuable property in American sports."

"Howard was defined by what he said, not how he looked or spoke," said Dick Ebersol, now president of NBC Sports and once an ABC Olympic researcher who worked with Cosell for many years. "He's a seminal figure not only in sports, but all of television."

Cosell, a pioneering broadcast sports journalist, frequently was the target of critics in the print media, mostly for promoting sports he later attacked and dropping the names of famous people he considered friends. Cosell usually dismissed his detractors as merely jealous of his power and influence.

He also came under frequent attack from viewers, perhaps never more so than when he defended Ali after the New York State Boxing Commission stripped Ali of his title in 1967, when the boxer claimed conscientious objector status for the draft.

"What the government did to this man was inhuman and illegal under the Fifth and Fourteenth amendments," Cosell said at the time. "Nobody says a damned word about the professional football players who dodged the draft. But Muhammad was different; he was black and he was boastful."

ABC was deluged with hate mail and telephone calls, including several threats on his life. Cosell once described some of the letters as making the request to the network to "get that nigger-loving Jew bastard off the air."

Cosell, the grandson of a rabbi, was born Howard William Cohen in Winston-Salem, N.C., on March 25, 1918, the son of Isadore and Nellie Cohen. His father was a Polish immigrant who worked as an accountant for a chain of credit clothing stores and moved the family to Brooklyn not long after Cosell was born.

Cosell attended public schools in Brooklyn, including Alexander Hamilton High School, where he was an outstanding student and wrote for the sports pages of the school's newspaper. In an interview with Esquire magazine in 1972, Cosell said he remembered "going to school in the morning, a Jewish boy. I remember having to climb a back fence and run because the kids from St. Theresa's parish were after me. My drive, in a sense, relates to being Jewish and living in an age of Hitler. I think these things create insecurities in you that live forever, and your desire to offset them is a drive to accumulate economic security."

Cosell's family wanted him to be a lawyer. After studying English literature and graduating Phi Beta Kappa from New York University, he got his law degree from NYU, edited the school's law review, and was admitted to the New York state bar in 1941 at the age of 23.

Cosell became a major in the U.S. Army Transportation Corps during World War II. Cosell and Mary Edith "Emmy" Abrams, were married in 1944 while he was in the service. She died in 1990.

After the war, he opened a law office in Manhattan. Cosell counted among his clients several actors -- he'd spent time in college on the stage himself working summer stock productions -- and athletes, including Willie Mays. He also represented the Little League of New York, a connection that got him his first job in broadcasting.

That came in 1953, when an ABC program manager asked him to host a Saturday morning radio show that featured Little Leaguers asking questions of major leaguers. Cosell jumped at the chance. He did the show for three years without pay, but finally abandoned what had become an unsatisfying career in law to work full-time in broadcasting in 1956.

Cosell also became a member of ABC's pioneering Olympic coverage in the 1960s. In 1968 at the Mexico City Summer Games, he once again was the focus of outrage among some viewers for his generally sympathetic interview of sprinter Tommie Smith. Smith's "black power" gesture of a clenched fist on the victory stand, along with teammate John Carlos, resulted in their being sent home by the U.S. Olympic Committee.

Cosell's greatest triumph might have been "Monday Night Football." ABC was trailing the other networks in the ratings, and most experts believed putting a sports event on in prime time against entertainment programming would be a disaster.