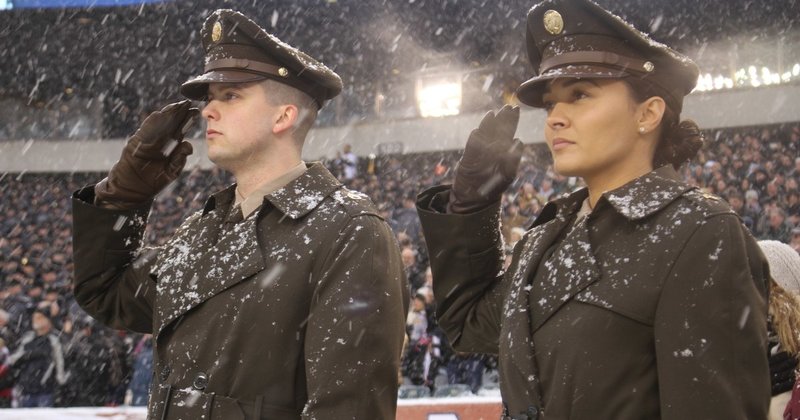 LTC John Mohor
>1 y
It's about time now we just need the khakis back for warm weather!
(1)
Reply
(0)

LTC Stephen C.
>1 y
You won’t get any argument from me, MSgt George Cater. You’re preaching to the choir! The year 1954 is when when greens were introduced and pinks and greens and the OD uniforms started to disappear. I wish the Army had never changed, but they didn’t ask me!
Believe me, I have an infinite amount of respect for tradition and keeping what works. I still have my father’s Navy service dress blues coat that he wore when he was commissioned on 29JUN44. But for age and material, it would be fit right in with a recently purchased Navy officer's service dress uniform.
(1)
Reply
(0)

MSgt George Cater
>1 y
Yet again, simply follow the Marine’s lead. A short sleeve version of the new shirt (NEVER with a tie!) worn with the new trousers and you have a uniform for any season. I was in before the Corps switched to all season greens, and while I didn’t initially like it, I do recall how khaki trou show dirt far easier than greens. LTC John Mohor
(1)
Reply
(0)

LTC Stephen C.
>1 y
I always enjoyed working with Marines, MSgt George Cater. In fact, my last assignment before retirement was a DOD joint services assignment, working alongside all the sister services, and it was a great experience.
As far as following the Marines' lead, well you must remember because of that birthday thing, the Marines always follow the Army! :)
(0)
Reply
(0)

SGM Steve Wettstein
Posted >1 y ago
CH (COL) Geoff Bailey Chaplain Bailey, wish this would have happened in 09 when I was at USASMA. We were kind of encouraged to buy the new ASU's to set a good example. Now we will have a true Dress Blue Uniform instead of a bow tie while wearing ASUs. Prior to the ASU decision, I had actually voted for Pinks and Greens when they polled Soldiers on AKO. Saw how far that went. Just like when we asked GEN Casey during a USASMA visit, who at the time was the Army CoS, when we could get rid of the black beret. He stated, and this is a pretty much a direct quote, "Over 80% of the Soldiers I have talked to prefer it." We all looked at each other and were saying BS who TF is he talking to? Now Big Army needs to just keep this Class A Uniform for a few decades, or longer, instead of every time we get a new SMA/CoS Team decide that they will change a uniform to put their names on some big change during their term as SMA/CoS.

The change of going from Green Class A's to the ASU had good intentions of saving money but in all actuality, the Class A's with a bow tie was the same thing as ASU's with a bow tie. You just couldn't sew anything on to ASU's like you could with the Class A Greens. Which, IMO, looked better when you had patches sewn on instead of all the extra badges. They said it was to save money from sewing the different patches, but with the high cost of the CSIBs (Combat Service Identification Badge) didn't really lower any costs. I am pretty sure that everyone would have been cool with just keeping the Green Class A's instead of going to the bus drivers uniform. Now I will have to get a new uniform to get buried in. Don't know if it will be Mess Dress or the Army Greens (which looks more brown than green to me). It'll probably be Mess Dress which I was going to buy anyway for my daughters wedding (whenever that will be).
(3)
Comment
(0)

SGT Donald Croswhite
Posted >1 y ago
Sounds like the Army is bored. Didn't we just go from greens to dress blues? So all the bulls**t about wanting to remember the civil war was just a way to get money out of the service members pocket. This is some bureaucrat garbage. Welcome to garrison.
(3)
Comment
(0)
Show More Comments
Read This Next
RallyPoint Home