Elway played college football at Stanford and his entire 16-year professional career with the Denver Broncos. At the time of his retirement in early 1999, Elway recorded the most victories by a starting quarterback and statistically was the second most prolific passer in NFL history. He was also a prolific rusher of the ball, being one of only two players ever to score a rushing touchdown in four different Super Bowls (the other being Thurman Thomas) and the only quarterback to do so.[1][2]

Elway set several career records for passing attempts and completions while at Stanford and also received All-American honors. He was the first selection in the 1983 NFL Draft, famously known as the quarterback class of 1983, where he was taken by the Baltimore Colts before being traded to the Denver Broncos. In January 1987, Elway embarked on one of the most notable performances in sports and in NFL history, helping engineer a 98-yard, game-tying touchdown drive in the AFC Championship Game against the Cleveland Browns. The moment is known in National Football League lore as "The Drive." Following that game in Cleveland, Elway and the Broncos lost in Super Bowl XXI to the New York Giants.

After two more Super Bowl losses, the Broncos entered a period of decline; however, that ended during the 1997 season, as Elway and Denver won their first Super Bowl title by defeating the Green Bay Packers 31–24 in Super Bowl XXXII. The Broncos repeated as champions the following season in Super Bowl XXXIII by defeating the Atlanta Falcons 34–19. Elway was voted MVP of that Super Bowl, which was the last game of his career, and in doing so Elway set a then-record five Super Bowl starts which was broken in February 2015 when Tom Brady of the New England Patriots started Super Bowl XLIX. As Denver's quarterback, Elway led his teams to six AFC Championship Games and five Super Bowls, winning two. After his retirement as a player, he served as general manager and executive vice president of football operations of the Broncos, which won four division titles, two AFC Championships, and Super Bowl 50 during his tenure. 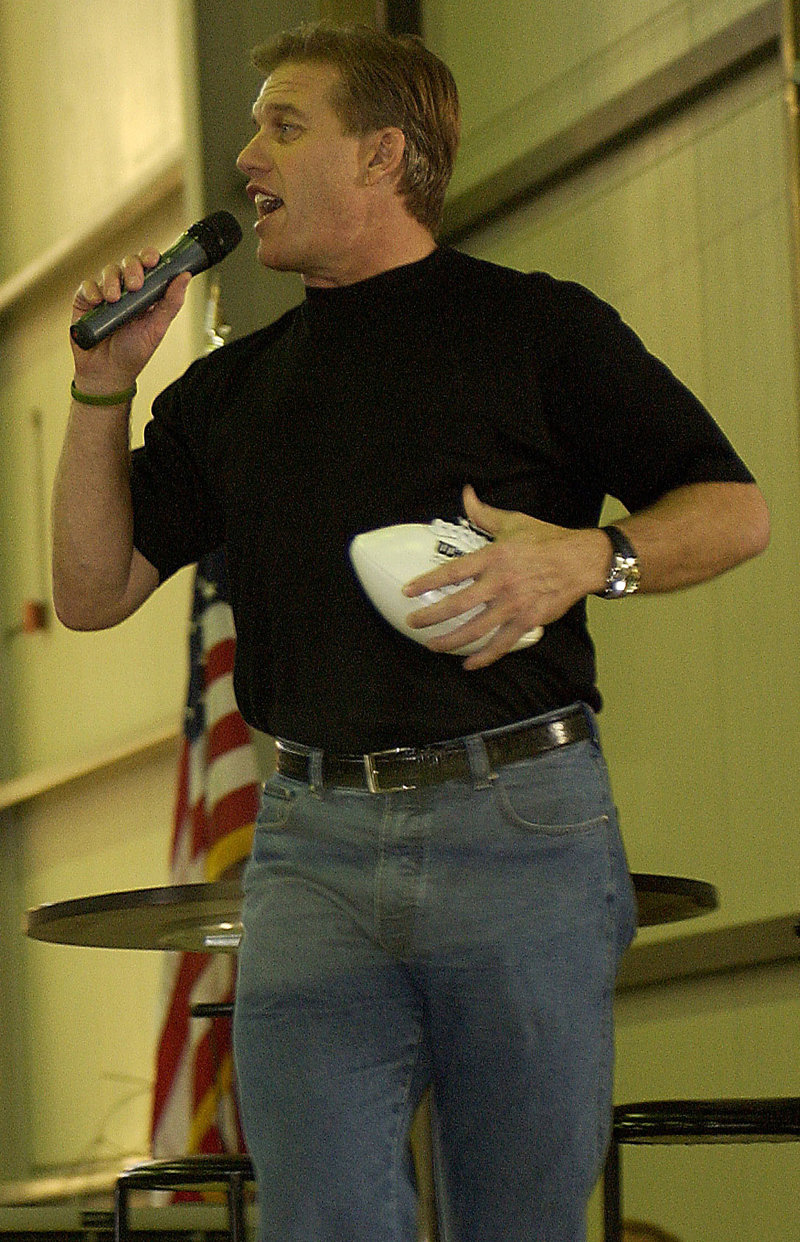 John Elway's Early Life
John Elway was born as John Albert Elway Jr. on 28 June 1960, to American patents Jack Elway and Janet Elway. Port Angeles, the United States is his birthplace, he is an American by his nationality and his ethnicity is white. In the year 1983, his career gets starts. He graduated from the Stanford University.

Professional Career of John Elway
He is the man who dedicated, devoted and committed towards his career, he is the man who had never failed in his life, and he achieved his strength in his business and game by his continuous loyalty in his profession. Moving to his early phase of life and career, in the year 1979, he went to Stanford University; he played football and baseball there, he showed his proficiency while he was in the college.
Moving to his professional life and career, his college playing skills leads him to a successful football career, he was a regular and significant player of Denver Broncos, and he was associated with the team for 15 years. We can say that Denver Broncos provided him a perfect platform to his career. He also bags several awards due to his extraordinary performance in the American football world.

John Elway's Personal Life
Accounting his personal life and biography, his personal life is not as perfect as his career; his first spouse is Janet Buchan, they lived together happily for the 19 years, they separated in 2002 and divorced in 2003. They have four children together; they are Jessica, Jordan, Jack, and Juliana. After getting divorced from his first wife, he was having an affair with Paige Green; she was a cheerleader by her profession.
In the year 2009, the lovely couples united together in a married relationship, presently, they both are living happily together, he is a loyal and dedicated husband, and there is no any issue of divorce between the lovely couples. He is not only a sports person but also one of the renowned businesspersons, he set an example by giving his best efforts in his profession, by sexuality he is very straight and not a gay. He is not involved in any extramarital affair and not have a girlfriend too.

Net Worth and Salary of John Elway
The 57 years aged, former American football quarterback and the current general manager and executive vice president of football operations of the Denver has earned high amount of net worth throughout his career. As of 2018, he has an estimated net worth of $145 million, including all of his properties and earnings. He is currently receiving an annual salary of $3.5 million from his club. He is listed in the world's top ten richest NFL player along with Tom Brady, Eli Manning, and Tony Romo on the list.
Elway was the co-owner and CEO of the Arena Football team the Colorado Crush and served as the chairman of the AFL executive committee. He too owns two restaurants in Colorado which are appropriately named "Elway's". He previously owned five car dealerships and is still the owner of two Toyota Scion dealerships."

John Elway: Short Biography, Net Worth & Career Highlights
"John Albert Elway Jr. was born on 28 June 1960, in Port Angeles, Washington State USA, and is an ex- American Footballer who played in the position of quarterback, and is noted for leading the Denver Broncos to two Super Bowl victories. Currently, Elway serves as the general manager of the Broncos, and in 2016 won his third Super Bowl with the franchise.
So just how rich is John Elway? Celebrity dot money estimates that Elway’s net worth is over 160 million dollars, while his annual salary is as much as three million dollars. Elway has accumulated most of his net worth during his career as a professional football player, exclusively with the Broncos from 1983 to 1998..
John’s father, Jack Elway, served as a high school head coach, and later became an assistant NFL coach, and worked at Montana and Washington State Universities. Elway’s childhood depended a lot on his father’s job, as the whole family had to move according to their father’s employment location. However, they spent most of the time in Montana, Washington, and in the San Fernando Valley, where John Elway attended the Granada Hills High School. In school, Elway became interested primarily in football and baseball, even taking part in the Major League Baseball Draft in 1979, and was chosen by the Kansas City Royals. On matriculating from high school, Elway continued his studies at Stanford University, where he had more opportunities to showcase his baseball skills. Once again he entered the MLB Draft in 1981, and was selected by the New York Yankees. However, when he graduated with a degree in economics, he decided to pursue a career in American Football instead, and upon entering the 1983 NFL Draft, was picked by the Baltimore Colts, who then traded him to the Denver Broncos. As a player, John Elway stayed with the Broncos until 1998, when he finished his professional football career, and then returned to the team in 2011 as an Executive Vice President of Football Operations.
From his first season, Elway proved himself to be a skillful football player. Over the years, John Elway managed to become a Super Bowl champion twice, in 1997 when the Broncos secured their first ever title, and again in ‘98, when he also became the oldest player - at 38 - to score a touchdown in the Super Bowl. He was an AFC champion five times, NFL MVP in 1987, UPI AFC Player of the Year two times, and was the Super Bowl MVP in 1998. He was selected nine times to the Pro Bowl, a Bronco’s record. At his retirement, he had recorded the most wins ever by a starting quarterback. Later John Elway was inducted into the Denver Broncos Ring of Fame, Colorado Sports Hall of Fame, as well as the Pro Football Hall of Fame in 2004.
In addition to being a professional football player, John Elway did not shy away from business opportunities. In 2002, he bought out a co-ownership of another American Football team, the Colorado Crush, remaining as such until the Arena Football League (AFL) was cancelled in 2008. Elway also owns several restaurants named “Elway’s”, which are located in Denver. To contribute to his wealth, Elway began endorsing LASIK eye surgery, and also became a spokesman for “OpenSports.com” website.
In his personal life, John was married to Janet Buchan from 1984 until 2003 – they have four children. He has been married to Paige Green since 2009."
https://www.youtube.com/watch?v=hNhhdZ7HEVo

MSgt Robert "Rock" Aldi
Posted >1 y ago
"where he was taken by the Baltimore Colts before being traded to the Denver Broncos. "

He flat out refused to play in Baltimore..jumped up and down...whined like a prima donna until the Colts caved. ( if you will) I thought it was arrogant of a college kid THEN...and still do. That said, I don't take anything away from his QB skills...after all ..Denver beat my BELOVED GB PACKERS in the SB.
SSG James J. Palmer IV aka "JP4" LTC Orlando Illi LTC Stephen C.
(3)
Comment
(0)

SGT David A. 'Cowboy' Groth
Posted >1 y ago
Not much of a sports fan, but John Elway is a great football player.
(2)
Comment
(0)
Show More Comments
Read This Next
RallyPoint Home