Reagan was raised in a poor family in small towns of northern Illinois. He graduated from Eureka College in 1932 and worked as a sports announcer on several regional radio stations. After moving to California in 1937, he became an actor and starred in a few major productions. Reagan was twice elected President of the Screen Actors Guild—the labor union for actors—where he worked to root out Communist influence. In the 1950s, he moved into television and was a motivational speaker at General Electric factories. Reagan had been a Democrat until 1962, when he became a conservative and switched to the Republican Party. In 1964, Reagan's speech, "A Time for Choosing", supported Barry Goldwater's foundering presidential campaign and earned him national attention as a new conservative spokesman. Building a network of supporters, he was elected Governor of California in 1966. As governor, Reagan raised taxes, turned a state budget deficit to a surplus, challenged the protesters at the University of California, ordered in National Guard troops during a period of protest movements in 1969, and was re-elected in 1970. He twice ran unsuccessfully for the Republican presidential nomination, in 1968 and 1976. Four years later in 1980, he won the nomination, and then defeated incumbent president Jimmy Carter. At 69 years, 349 days of age at the time of his inauguration, he became the oldest president-elect to take the oath of office (a distinction now held by Donald Trump, since 2017). Reagan faced former vice president Walter Mondale when he ran for re-election in 1984, and defeated him in a landslide with the largest electoral college victory in American history.

Soon after taking office, Reagan began implementing sweeping new political and economic initiatives. His supply-side economic policies, dubbed "Reaganomics", advocated tax rate reduction to spur economic growth, economic deregulation, and reduction in government spending. In his first term he survived an assassination attempt, spurred the War on Drugs, and fought public sector labor. Over his two terms, the economy saw a reduction of inflation from 12.5% to 4.4%, and an average annual growth of real GDP of 3.4%. Reagan enacted cuts in domestic discretionary spending, cut taxes, and increased military spending which contributed to increased federal outlays overall, even after adjustment for inflation. Foreign affairs dominated his second term, including ending the Cold War, the bombing of Libya, the Iran–Iraq War, and the Iran–Contra affair. In June 1987, four years after he publicly described the Soviet Union as an "evil empire", Reagan challenged Soviet General Secretary Mikhail Gorbachev to "tear down this wall!", during a speech at the Brandenburg Gate. He transitioned Cold War policy from détente to rollback by escalating an arms race with the USSR while engaging in talks with Gorbachev. The talks culminated in the INF Treaty, which shrank both countries' nuclear arsenals. Reagan began his presidency during the decline of the Soviet Union, and the Berlin Wall fell just ten months after the end of his term. Germany reunified the following year, and on December 26, 1991 (nearly three years after he left office), the Soviet Union collapsed.

When Reagan left office in 1989, he held an approval rating of 68 percent, matching those of Franklin D. Roosevelt, and later Bill Clinton, as the highest ratings for departing presidents in the modern era.[1] He was the first president since Dwight D. Eisenhower to serve two full terms, after a succession of five prior presidents did not. Although he had planned an active post-presidency, Reagan disclosed in November 1994 that he had been diagnosed with Alzheimer's disease earlier that year. Afterward, his informal public appearances became more infrequent as the disease progressed. He died at home on June 5, 2004. He is viewed favorably in historical rankings of U.S. presidents, and his tenure constituted a realignment toward conservative policies in the United States. 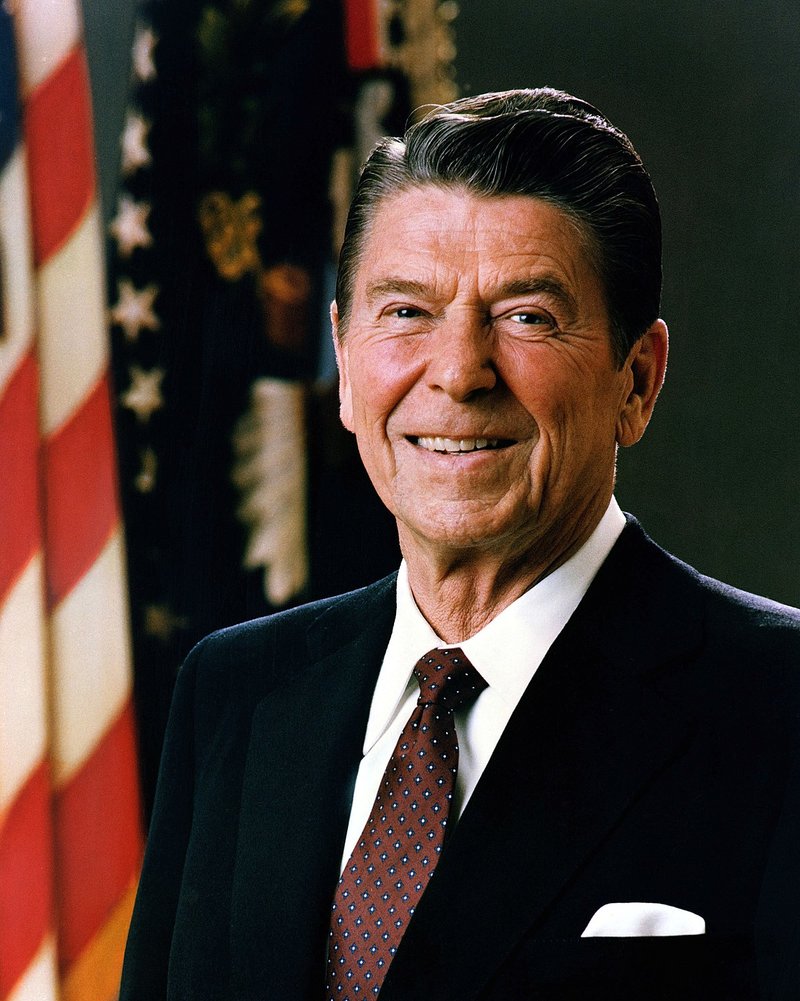 Mo Rocca does some digging into the Reagan wit and uncovers a treasure trove of jokes - many written by the man himself - in a very humorous look back on a p...

Thank you, my friend Maj Marty Hogan for making us aware that February 6 is the anniversary of the birth of actor, Anti-communism crusader, California Governor and the 40th President of the United States from 1981 to 1989 Ronald Wilson Reagan.
The Great Communicator who confounded the pundits and his steady demeanor in confronting the communist USSR was primarily responsible for bringing about the downfall of the USSR. His stalwart ally British Prime Minister Margaret Thatcher was secondly responsible for the downfall of the USSR and Warsaw pact without any major confrontations or shots fired.
Rest in eternal peace Ronald Wilson Reagan.
Ronald Reagan's one-liners
https://www.youtube.com/watch?v=HA7sP47e8tA

Background from whitehouse.gov/about-the-white-house/presidents/ronald-reagan/
"Ronald Reagan, originally an American actor and politician, became the 40th President of the United States serving from 1981 to 1989. His term saw a restoration of prosperity at home, with the goal of achieving “peace through strength” abroad.
At the end of his two terms in office, Ronald Reagan viewed with satisfaction the achievements of his innovative program known as the Reagan Revolution, which aimed to reinvigorate the American people and reduce their reliance upon Government. He felt he had fulfilled his campaign pledge of 1980 to restore “the great, confident roar of American progress and growth and optimism.”

On February 6, 1911, Ronald Wilson Reagan was born to Nelle and John Reagan in Tampico, Illinois. He attended high school in nearby Dixon and then worked his way through Eureka College. There, he studied economics and sociology, played on the football team, and acted in school plays. Upon graduation, he became a radio sports announcer. A screen test in 1937 won him a contract in Hollywood. During the next two decades he appeared in 53 films.

From his first marriage to actress Jane Wyman, he had two children, Maureen and Michael. Maureen passed away in 2001. In 1952 he married Nancy Davis, who was also an actress, and they had two children, Patricia Ann and Ronald Prescott.

As president of the Screen Actors Guild, Reagan became embroiled in disputes over the issue of Communism in the film industry; his political views shifted from liberal to conservative. He toured the country as a television host, becoming a spokesman for conservatism. In 1966 he was elected Governor of California by a margin of a million votes; he was re-elected in 1970.

Ronald Reagan won the Republican Presidential nomination in 1980 and chose as his running mate former Texas Congressman and United Nations Ambassador George Bush. Voters troubled by inflation and by the year-long confinement of Americans in Iran swept the Republican ticket into office. Reagan won 489 electoral votes to 49 for President Jimmy Carter.

On January 20, 1981, Reagan took office. Only 69 days later he was shot by a would-be assassin, but quickly recovered and returned to duty. His grace and wit during the dangerous incident caused his popularity to soar.

Dealing skillfully with Congress, Reagan obtained legislation to stimulate economic growth, curb inflation, increase employment, and strengthen national defense. He embarked upon a course of cutting taxes and Government expenditures, refusing to deviate from it when the strengthening of defense forces led to a large deficit.

A renewal of national self-confidence by 1984 helped Reagan and Bush win a second term with an unprecedented number of electoral votes. Their victory turned away Democratic challengers Walter F. Mondale and Geraldine Ferraro.

In 1986 Reagan obtained an overhaul of the income tax code, which eliminated many deductions and exempted millions of people with low incomes. At the end of his administration, the Nation was enjoying its longest recorded period of peacetime prosperity without recession or depression.

In foreign policy, Reagan sought to achieve “peace through strength.” During his two terms he increased defense spending 35 percent, but sought to improve relations with the Soviet Union. In dramatic meetings with Soviet leader Mikhail Gorbachev, he negotiated a treaty that would eliminate intermediate-range nuclear missiles. Reagan declared war against international terrorism, sending American bombers against Libya after evidence came out that Libya was involved in an attack on American soldiers in a West Berlin nightclub.

By ordering naval escorts in the Persian Gulf, he maintained the free flow of oil during the Iran-Iraq war. In keeping with the Reagan Doctrine, he gave support to anti-Communist insurgencies in Central America, Asia, and Africa.

Overall, the Reagan years saw a restoration of prosperity, and the goal of peace through strength seemed to be within grasp.

Lt Col Charlie Brown
Posted >1 y ago
Wish we had a politician of his stature now.
(6)
Comment
(0)

TSgt Joe C.
Posted >1 y ago
He was a great actor and even better POTUS Maj Marty Hogan
(5)
Comment
(0)