Which handgun would you recommend to someone with little or no firearms training or experience, for home protection?

CPT Jack Durish
20.1K
726
248
111
111
0
Let's eliminate the obvious. He has already been presented with the pros and cons of firearm ownership and the various arguments over the 2nd Amendment, and made his informed choice to purchase and keep a firearm for home defense. Of course I recommended that he obtain professional training in the proper maintenance and safe handling of whatever he purchases.

I had recommended the Taurus .45 cal/.410 shotgun. Actually, I'm considering one for myself. It seems to me that having a virtually nonlethal round in the first chamber would be desirable for someone who might be hesitant to pull the trigger, even when he, his family and home are threatened. The .45 Long would then provide effective stopping force for anyone who didn't take the hint. Also, I feel that revolvers are inherently more reliable, especially in the hands of a novice.

Wouldn't you know it, California has banned the sale of this weapon because it fires a shotgun shell. Oh the horror! A .410!

I advised him to go to another state and get one if he really wanted it. (That's what I'm likely to do)

However, what other options would you recommend?
Posted in these groups:

SSG Nathaniel Bendel
Posted >1 y ago
I wouldn't recommend any firearm to someone who has little to no firearms training. The possibility for something to go wrong here is too great. My recommendation would be to start taking some classes at a local range or shop. Most have introductory classes for beginners and some offer classes to help new shooters select a firearm they're comfortable with. The training should happen BEFORE the firearms purchase. After that, it's simply a matter of what they're comfortable with. The debates will rage on about what's best; rifle, shotgun, or handgun. They'll just need to educate themselves on the subject and make an informed decision.
(66)
Comment
(0)
show previous comments

Maj Christopher Wells
8 d
As a certified NRA firearms instructor I concur. Get the training before you buy. Try out all the options and get what you are comfortable with.
(6)
Reply
(0)

PO3 Dennis Workman
7 d
Sound advice, no two shooters are the same. Two trained shooters will not necessarily print their group's in the same exact area. So it is important for people to get the experience of different calibers, triggers, actions and grips to define their preferences and find the firearm that best meets their needs.
(2)
Reply
(0)

PFC Kim Howard
7 d
Absolutely spot on SSG Bendel. No one should even consider gun ownership without being fully trained, accurate, knowledgeable and confident. Also, consider where you live. Do you live in a apt, condo, townhouse, row house, etc, with connected walls? Long barrel rifles will indeed shot through walls. For anyone who thinks those types of accidental deaths don't occur regularly, we call you people, wrong! Your surroundings are so very important. As are the laws in the state you live in. Is it Castle Doctrine only, Stand your Ground, Stand your ground plus no duty to retreat? What are the applicable laws. And as a license insurance agent, I would also advise, do not, do not, own a gun without getting yourself INSURED. The day you purchase your firearm, immediately purchase your insurance. Disclaimer: I do not write for, represent or endorse any of these companies. This link is just for informational purposes only. Remember, it's a whole lot easier to stay out of trouble than it is to get out of trouble. But when you find yourself needing to defend yourself, the service these companies offer will be invaluable to you as a responsible gun owner. And you will know exactly what to say and what not to say after you have discharged your firearm. Just a piece of advice, take it or leave it.
https://www.concealedcarry.com/self-defense-gun-owner-insurance-programs-compared/

We will continue to update this chart as we notice changes in the industry, but bear with us if you notice anything before we do. And, if you see something that has changed, as we assume it will because this is an ever-competitive market, please let us know so we can change it in the chart. Please note this important disclaimer. While we endeavor to maintain the below information accurate and up to date you are responsible to research and be...

SSG James Snider
8 h
PFC Kim Howard - I started with one MC1 after many other carry pistons, within two weeks my wife had commandered it and declared it hers. I now have three and have traded her the non-hard safety unit for a hard safety push button unit. you can get both. Best part, it uses Glock 43 mags and you can buy a 2 round extender from E.M.P thus making it a 9 round single stack and full handle compact. 3,000 rounds through them and not one jam on anything, to include the cheap steel. Hope you enjoy, Oh Yea, MADE IN TEXAS!
(1)
Reply
(0)

PFC Kim Howard
7 h
SSG James Snider - Thanks so much for the glowing review of the Mossberg, I have been torn between that one and the tried and true Glock. I can't wait to get home and get to my local range to test drive that pistol and make that purchases along with the extended mag. God Bless Texas! I loved being stationed in TX. And if FL ever turns blue, GOD FORBID, Texas is viable option for residency. Luckily I have already acquired my insurance licenses for that state. Thinking about getting licensed in Wyoming and South Dakota next, plus looking to purchase a very large piece of property in WY. Home on the range with a range on the homestead! Yes indeed!
(0)
Reply
(0) 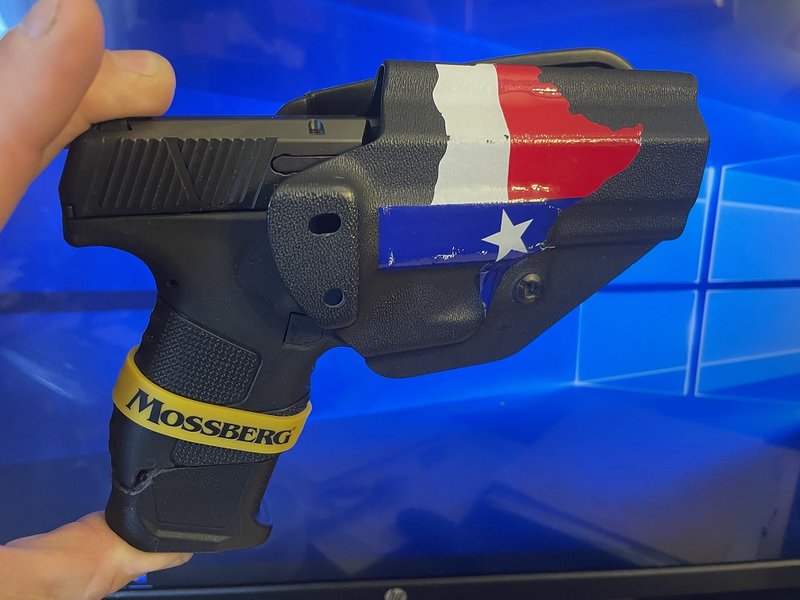 In snuggy, out of snuggy.. This is the extended to 9 rounds adaptation. the band is a grip enhancer/point of reference for your hand and changes your whole reference to the gun.
(0)
Reply
(0)

1) Shotgun (yes, I know it's not a handgun). It is the classic "Point & Click" mechanism. Generally speaking, you don't have to "aim" it, you "point" it, and you can point it from across a room AT the door. and still hit your target. Additionally, the racking of a shotgun has a very "distinct" sound akin to that of a rattlesnake in that it can cause visceral level fear in anyone that is familiar with it's sound.

2) S&W Revolver. (357 magnum). The advantage of revolvers is that you don't have to "clear" them. If you have a "misfire" you just pull the trigger again. Rinse and repeat. A .357 is a pumped up 9mm or .38, but it will give someone a hell of a bad day. Yes you only have 5 rounds, but generally speaking people have an easier time firing revolvers than pistols. Part of it is ergonomics, and part of it is mechanics. An additional benefit of the .357 is the reduced cost of practice (you can supplement training with .38)

3) Glock .40 or 9mm. I like "bigger is better" (my carry is a .45) but 40/9mm are generally the most popular so availability of ammo and accessories can be a big deal. Alternately look at the XD from Springfield (great gun and I like it better than the Glock, but it's just not as wide spread).

Edit: CPT Jack Durish Based on your edit, I provide the following "Better to be tried by 12 than carried by 6."

Taurus is the "farm equipment" of handguns. Inexpensive, reliable, and with good longevity.

However, the logic of having a non-lethal round in the SECOND chamber (remember it spins and the hammer engaged the NEXT round) gets a little more complex. I'd almost recommend and Empty one rather than Non-lethal. That adrenaline rush is going to happen and the trigger is going to be pulled in sequence until an empty chamber is hit, which forces conscious thought.
(25)
Comment
(0)
show previous comments

SP5 Hugh Brown
8 d
Wow, I am in agreement with your recommendation of the revolver, but I don’t understand the thinking of an empty chamber being second in the cylinder. What if you miss with the first shot, and only get a click the second pull? That seems to me like it would create instant panic, especially in the circumstance of an inexperienced gun owner.
(2)
Reply
(0)

SGT Chester Beedle
5 d
At 25 yards the spread of a 12 gauge with buckshot is only about 8 inches. The advantage of a shotgun or any long gun is that it's easier and faster to aim.
(2)
Reply
(0)

CSM Bruce Trego
4 d
I like the shotgun with someone who is trained and understands how to use it. I would say that the size of the barrel itself would encourage an antagonist to leave them alone. The pistol is a good selection too. It has more than capable stopping power and, with .38 caliber rounds, can be used for practice relatively cheaply. It depends on which makes you feel comfortable.
(1)
Reply
(0)
Show More Comments
Read This Next
RallyPoint Home