Are there others who choose not to wear the Combat Action Badge because its value has lost so much meaning? 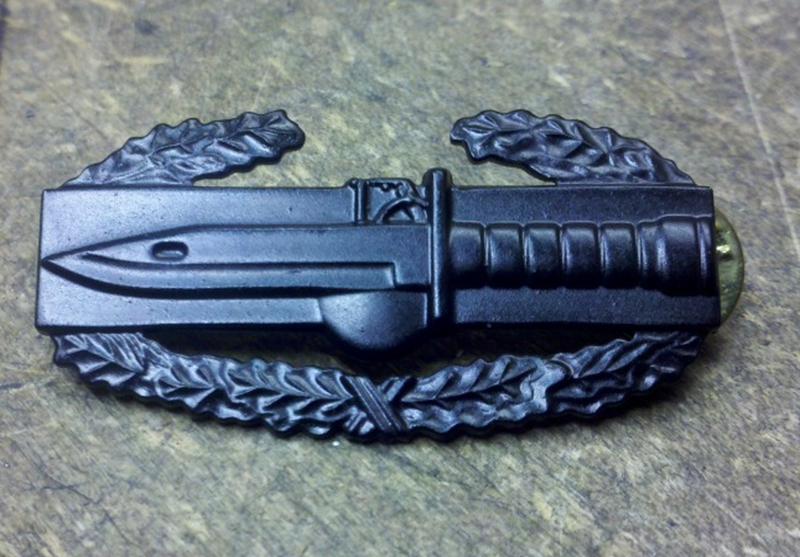 Just wondering if there are any soldiers that like myself have been awarded the CAB due to direct combat but do not wear it because it has been given out so frivolously that it has lost its luster. For instance, I know another soldier that had been awarded a CAB because a mortar landed in the FOB he was at and didn't know about the mortar until the papers were being submitted for the CAB.
Posted in these groups:

Here's my two cents on the CAB/CIB and any other shiny badge that you earned. Wear them, all the time. Pay to get them sewn on your uniforms and be honest if anyone asks about them.

A lot of Soldiers don't wear there special skill badges, they think it's cool to be "seen for their performance" instead of what they wear on their chest. Here's the thing, your junior Soldiers look up to you, they want to be like you, they want you to share your experiences with them so they can learn. It gives you an opportunity to tell your story about different experiences throughout your career and your Soldiers will ask about them.

SSG Lloyd Becker BSBA-HCM, MBA
5 y
My son, who was MLRS in Iraq, did a lot of work as an infantryman, yet, the CAB did not come his way. I know that Pres. Reagan signed the CAB in, but people were not getting the recognition for being in conflicts, or combat.

As far as any are concerned, there are only two badges: Litter and a wreath, Rifle and a wreath; that's it folks.
(0)
Reply
(0)

The Combat Action Badge was approved on May 2, 2005, and was retroactively awarded to soldiers who were engaged in combat after September 18, 2001. On June 29, 2005, General Peter J. Schoomaker awarded the CAB for the first time to Sergeants April Pashley, Michael Buyas, Manuel J. Montano, Timothy Gustafson and Sean Steans. Over one hundred thousand CABs have been awarded since the creation of the award. Most commanders do not issue the CAB to qualified soldiers unless they are directly engaged in combat. Notably, it is granted exclusively for contact with enemy combatants, so actions by noncombatants like detainees or rioting civilians do not qualify. Soldier must be personally present and actively engaging or being engaged by the enemy, and performing satisfactorily in accordance with the prescribed rules of engagement. There is no specific requirement for the enemy hostile contact to be direct.

The CAB is not available to U.S. Army combat veterans of previous conflicts prior to September 2001.

COL Charles Williams
Edited 5 y ago
Posted 5 y ago
I could tell you many stories... But, I will just say he CAB is NOT pointless. The issue with the CAB (and the CIB for that matter) is the fidelity in the system, which revolves around Commanders. Awards and decorations have long been a source of frustration, consternation, and debate. But, that said, the CAB is a worthwhile award, like the CIB, and CMB, so long as we Commander maintain the fidelity in the system. The CAB sailed off the tracks more than once. Again, I (like you am sure) could tell you many stories..

But, for Armor, CAV, Engineers, MPs, Loggies, etc. who are out an about everyday fighting and supporting, this is a good and necessary award, which has been discussed and debated since I came in the Army. It is not only our Infantry brothers who fight up close and personal.

Your choice not to wear it, is your choice. Just like a Captain in our Brigade who threw away his orders for CAB because he thought he did not deserve it working in the Brigade TOC vs. the MP Soldiers of the line who in the thick of it day in a day out.

I know of an incident... where (seriously) Soldiers were sitting at a shuttle bus stop on VBC, a rocket hit lost lake, over 500 feet away, and they made a case for them receiving the CAB... seriously? The Brigade and Corps said no... so they bypassed them and went MNCI... who approved them...

I was shot at more in Somalia, and returned fire more there, but I still value an appreciate my CAB, and the day it was awarded for. Lots of damage to our squad convoy, lots of returned fire by our great gunners, but no injuries, and we all made it back in one piece.

I will always remember the squad I rolled with in Baghdad during 15 months of the surge... they allowed me to come home safe and sound.
(18)
Comment
(0)
show previous comments

LTC Jason Mackay
5 y
Nobody wants to award a badge to Loggies, as a consequence I wear my CAB with pride everyday. No one can police up every stretch of truth or "unjust" CAB, CIB, or CMB determination.
(1)
Reply
(0)

COL Charles Williams
5 y
Hooah! Thanks for your comments!
(0)
Reply
(0)

MSG David Rogers III
>1 y
Right on sir! I wear mine with pride, and earned it during a legitimate combat action. It is a worthwhile and meaningful award. But I also saw situations where Soldiers receive it when a rocket would hit a few hundred Meters away, even though they were in a hardened building and there was 3 HESCO walls between them and the blast. I used to joke that most TOC personnel would start filling out the CAB paperwork before the rocket hit the ground!
(3)
Reply
(0)

COL Charles Williams
>1 y
MSG David Rogers III - Hooah... But, there are similar stories for all awards. Thanks for your service.
(0)
Reply
(0)

Thank you for your service and please appreciate what you survived.?
(13)
Comment
(0)

I have never forgotten that Soldier. That was in the "brown shoe, first three graders move to the front of the line, Army".
(3)
Reply
(0)
Show More Comments
Read This Next
RallyPoint Home