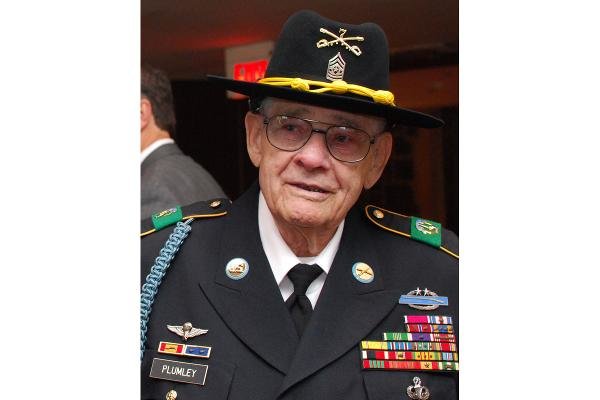 "The U.S. Army is investigating allegations by a military researcher that the late Command Sgt. Major Basil Plumley -- a legend in the airborne and infantry communities -- wore unauthorized combat and valor awards that exaggerated the wartime achievements that made him famous.

"Among the many documents Siddall provides in his research is an Oct. 2, 2015, letter from Army Lt. Col Wil Neubauer, chief of Awards and Decorations Branch, confirming that Plumley was authorized to wear one CIB and states that "we are unable to verify" the Combat Infantry Badge with "one star" listed on Plumley's DD Form 214.

"The October 2015 letter from the Army states Plumley was authorized only one Silver Star and the Bronze Star with one oak leaf cluster, not two OLCs. The letter also states that Plumley was not authorized to wear the V device with his Bronze Star medals."

Please read the article before commenting.

http://www.military.com/daily-news/2016/05/17/army-investigating-we-were-soldiers-legend-for-inflating-award.html
Posted in these groups:

MGySgt James Forward
Posted 6 y ago
Read the entire article. Appears to show that the Late CSM may have inflated his quota of awards. For one, I would never have put out in the press. This should have been handled "Back Channel" as there is no reason to blacken his reputation as he is no longer here to defend himself. I believe that benefit of doubt should go to the CSM.
(103)
Comment
(0)
show previous comments

MAJ John Douglas
4 y
If he was indeed legendary, why would he add false awards? Doesn't make sense.
(1)
Reply
(0)

SGT Shannon Weaver Logan
>1 y
Well said. I agree with you. In his own right he deserves honor. However hr is not here to defend himself. Maybe he started to suffer from Dementia. If that is thre case it could explain what he did. Everything is not always black and white.
(1)
Reply
(0)

CPT Kevin Connolly
>1 y
Only a REMF among REMFs would second-guess CSM Plumley. On the other hand, Dugout Doug...well, you know, some things don't need to be said.
(0)
Reply
(0)

CPL (Join to see)
1 y
This is chicken shit garbage. Go figure the military can’t find records from six decades ago. Didn’t the archives also burn in the 70s? Either way go after a hard charger for some petty crap so many years after his death is petty as fuck.
(0)
Reply
(0)

Capt Seid Waddell
Posted 6 y ago
"...Plumley's DD 214 does not match the official letter from the Army's Awards and Decoration Branch"

Harsh charges against a man that is dead and cannot defend himself. The discrepancies in the official records explain how these screw-ups can happen.
(98)
Comment
(0)
show previous comments

SSgt Boyd Welch
>1 y
There are also what's known as "desk awards". Happened during Vietnam. Gratetful commanders called a soldier in and handed him an award pulled out of his desk to honor duty that wouldn't be recognized or survive the paperwork flow up the chain of command (especially those about to get out)....
(3)
Reply
(0)

SGT Randall Smith
5 y
Leave the man alone. If nothing else he inspired others and the younger troops. I have on my wall at home the Army Commendation Citation from Viet Nam and one from my unit in Germany. Neither one is on my DD214. I caught shrapnel in Viet Nam and the CO gave me a Purple Heart. It is not on my DD214 either. When I went to the VA about 8 years ago to file a claim was told my unit never existed in Nam. I took my DD214, the Commendation citation and was told that was not enough. Did I have a unit patch or could I show a picture of it. And that was how I finally verified that I was a veteran.
(4)
Reply
(0)

SPC Robert Coventry
>1 y
I think there are bigger fish to fry, he can't defend himself one star or two stars on a CIB is totally different then a wanna be. RIP CSM
(0)
Reply
(0)

CSM (Join to see)
Posted 6 y ago
After the shit he went through in the Ia Drang I am sure CSM Plumley gave a rats ass about awards. As others have mentioned I seriously doubt the administrative paperwork was completely accurate during that period of time. He probably didn't give two shits about updating his 201/ERB before he retired and I am sure it reflects on his DD 214, that happens all the time in this time period.

He was a great American just let the man rest in peace.
(83)
Comment
(0)
show previous comments

SSG Douglas Espinosa
2 y
Exactly, mistakes happen. I am missing one of my deployments on my DD-214, but have all the proof. But don't care enough to have it corrected either.
(0)
Reply
(0)

PFC Craig Karshner
4 mo
We all are in agreement let the hero rest in peace. This should have been handled much better than that. He is a true hero..Rangers lead the way. God bless you my fellow warrior and us all.
(0)
Reply
(0)
Show More Comments
Read This Next
RallyPoint Home