By this time in 1972, the war in Vietnam had been going on for over ten years. Tens of thousands had been killed, even more wounded and a few thousand POWs and unaccounted for MIAs.

Looking back on this time of year, specifically December 18, 1972, most of us know where we were. Most of you younger troops were not yet the twinkle in your Daddy’s eyes.

For me, I was on my second remote/isolated tour in Southeast Asia. In March of 1971, I was assigned to the 307th FMS (Field Maintenance Squadron) Aero Repair or A/R shop at U-Tapao AB, Thailand. We carried the same AFSC or MOS if you will as those who were the primary crew chief on the heavy jets. Those being the C-141A, C-5A, KC-135 and variants and the Queen of the Air, the Mighty B-52. I mention this because the A/R shop caught all the jobs that no one else wanted or would do. We all know sh*t runs downhill. Well, we were the bottom of the hill. But I digress.

During my year we worked 12/12/6 and 7, meaning 12 hours on, off 12 and 6 and often 7 days a week. It was hot, dirty, sweaty work but we did what we had to do. We did it in spite of many not wanting to be there. We launched planes about every 90 minutes around the clock 24/7/365 except when the head shed slowed things down or even ceased flying for the holidays.

After my year at U-Tapao I asked for and received a COT – consecutive overseas tour. This time headed for Vietnam. In March 1972, I headed for DaNang. My tour there was to be short-lived. In September, my unit closed up shop. Those with over 180 days in country on the close date would go home while the rest of us would be reassigned. I was one of the lucky ones, I got to stay…well sort of lucky. After about 60 days, in November 1972 I was selected to go TDY to of all places, Clark AB, Philippines. That story is fodder for another time.

After returning from Clark, I was like a new man. Even though working 12/12/5 I returned relaxed and rejuvenated. The guys in the squadron never let me live that down either. The morning of December 19th is what will always remain, The Morning After the Night Before. It wasn’t because the town got painted red or any such frivolity but we walked into the maintenance shack to discover that the entire B-52 fleet in both Thailand and Guam went downtown to pay “Chuck” a visit. At first we were in disbelief, thinking that Radio Lone Star was jerking our chains with some kind of holiday gag. It turned out to be true. We were ecstatic. All of us were now filled with a new sense of resolve and purpose. This was the beginning of Operation Linebacker II.

While those of us in Vietnam were cheering, our brothers in Thailand and Guam were busting some serious hump. The next 11 days would prove to be a turning point in the war on so many levels.

First off, we lost more B-52s in those 11 days of Christmas* than we had lost in the entire war. We lost many good men on those missions. We had many more end up in the hands of “Chuck” and his accommodations at the Hanoi Hilton. Then after 11 days the deluge of BUFFS stopped. We shut down for Christmas. It wasn’t until years later we learned that had we just kept up the bombing for 2 more days, the North would have surrendered. We all know now how that turned out.

I have a number of friends who were aircrew participants in Linebacker II. I have the greatest admiration and respect for what they did in spite of the head shed screwing the pooch.

Never will I forget where I was in 1972 during “The Eleven Days of Christmas.” With that, I wish you all a Merry Christmas and a Happy New Year!

* ‘The Eleven Days of Christmas’ is a book written by Marshall Michel
Posted in these groups:

SGT Philip Roncari
Posted >1 y ago
Thankfully I had left "the land of the little people" (sorry I'm not PC yet) back in 1967 ,physically that is,the mental part seems to be taking a bit longer.
(28)
Comment
(0)
show previous comments

PO3 John Welsch
>1 y
Aboard the USS Samuel Gompers on an extended WestPac that included a stint in DaNang to fix our ships that were getting shot to hell...
(0)
Reply
(0) 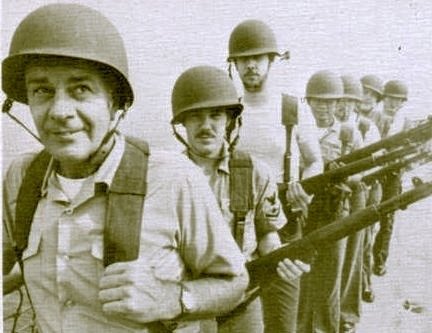 FA Bob Shepard
>1 y
served out of pearl harbor 1972 I saw a lot of American servicemen and women come back with their heads screwed on backwards to no fault of their own. I did my duty to the best of my ability. The main reason for this service personnel who where suffering from ptsd and respect to the thousands who were killed, mia and pows is because the us government failed them. We fought a war that made no sense both abroad and home. The us government failed to give service personnel a good reason to fight this stupid war. If you going to fight a war you have to fight to win not fail miserably. especially for the great scariface made by many American military men and women and their families.
(0)
Reply
(0)

1stSgt Nelson Kerr
>1 y
it was supposed to mean that those were as a whole very bad years.
(0)
Reply
(0)

SPC Robin Price-Dirks
>1 y
I was a kid in middle school praying both my brothers came back safely and wondering why I couldn't go at the age of 12?
(0)
Reply
(0)

TSgt James Lacey
Posted >1 y ago
I was in Germany dealing with Baeder-Meinhoff. Would have rather been in Nam at least there people were supposed to be trying to kill you.
(19)
Comment
(0)

SGT David Petree
>1 y
I was in Frankfurt, West Germany when Baeder - Meinhoff blow the front doors off the 5th Corp HQ . Killing 2 MPs & a Med Col. at the offers club.
(1)
Reply
(0)
Show More Comments
Read This Next
RallyPoint Home