RallyPoint signs an MOU with the Department of Veterans Affairs 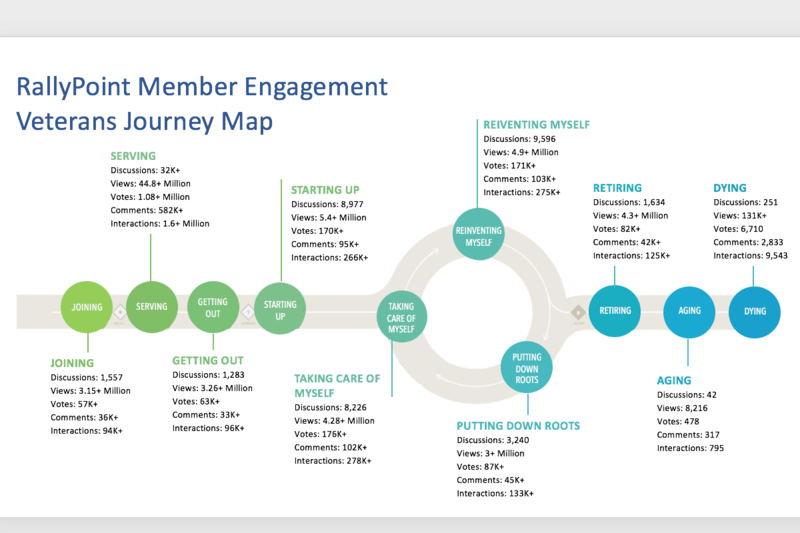 RallyPoint is proud to announce we have signed a Memorandum of Understanding (MOU) with the U.S. Department of Veterans Affairs to improve veteran outcomes and experiences. RallyPoint and the VA will collaborate to improve access to and navigation of services in local communities for Veterans worldwide. This technology-driven partnership will help community-based programs and support transitioning Servicemembers, Veterans, families, caregivers, and survivors.

As a way to show how this partnership is a natural fit to help both organizations better serve the military community, we’ve overlaid the discussions that RallyPoint members have created on the site over the VA Veterans Journey Map. You can see this visual in the diagram above.

You can click here to view the VA’s Lifetime Journey of a Veteran Map
https://rly.pt/JourneyMap
Posted in these groups:

SGT Chris Stephens
Posted 4 y ago
TBH, there's still going to be a lot of skepticism because of what the VA has been in the past. I guess the main question would be, how will you quantify success? The VA has continually been a disappointment in its ability to do its job in a quick and efficient manner, if they can do their job at all. Maybe it's just the cynic in me, but we've been told by the government so many times about improvements coming to the VA, and each time, they largely disappoint.
(19)
Comment
(0)
show previous comments

1SG (Join to see)
>1 y
I have heard a lot of stories about the VA, mostly bad ones because there is no media for good VA stories. There is a serious misconception about "The VA" because it's not one place, but a lot of places many of which are different in many ways due to the needs of the community, previously and now. "If you have seen one VA, then you have seen one VA."

But they don't budget it that way.

I hear a lot about the wait times, but I have some serious questions about that. IN the past, after the Pheonix AZ nightmare, the "Choice" program mandated that anything over 30 days and they had to be offered Community Care. The only way the appointments could be set further out is if the Veteran decided not to be sent out to the community.

Let me say that again. "If there is no appointment available in 30 days, they offer community care."

I point that out because when I hear a Vet say they waited MONTHS, they are either there by choice, out of ignorance, or some special case, or just full of crap.

Currently, Trump signed the Mission Act, which makes the same offer if there is greater than 20 days of wait, which is rolling out right now. This could lead to LESS VA doctors and availability because like everything else, its a "Use or Lose" situation when it comes to funding and if it is all going out to the community the VA doesn't get it. This is great for some Vets, but make no mistake they will cost more money.

Eventually, someone will realize it is being used for booboo's and sniffles, because that is what people do, and demand a co-pay, then a deductible, then, just privatize the whole deal, and you end up in the healthcare nightmare just like everyone else.

As far as Costumer Service goes, most of the staff are Veterans or Veteran Family members. I have seen some poor C/s, just like everywhere. I do not believe I have seen a patient base quiet as... Well, I heard a 30 year old vet screaming at a Korean War vet Volunteer about his, "Not understanding soldiers." I am proud of my Brothers and Sisters in arms, but some of you all are jerks.

So, no the service isn't perfect, but none of it is, an none of it has as much oversight as the VA Healthcare system. They are understaffed, they are under funded, and they are still coming out with some amazing discoveries, and programs, and serving more people than you would believe.
(3)
Reply
(0)

CPL Rod Shier
3 y
I feel that the VA has a lot of problems that need to be dealt with. The first and foremost is they don't tell the veteran nothing!! The veteran has to find out on their own for any compensations that they may have coming. The next is the turnover rate of medical staff that should be addressed. Once medical staff are hired, not sure if they take information given to them from veteran seriously to assist them in a claim.
(2)
Reply
(0)

CPL Allen Werth
>1 y
The VA has always taken good care of me. I have both the VA and medical insurance from my State employment. The VA has been better in my case.
(1)
Reply
(0)

Maj Marty Hogan
Posted 4 y ago
Pass this around to increase vis....

Derek Black
1 y
Pretty much every innovation chief is searching for economical approaches to either launch or scale development inside their association. However, what are the viable strides to arrive?
Go along with us Thursday https://fortegrp.com/landing/chicago-innovation-january/ , January 30th from 5:30-7 p.m. for the primary meeting in our 2020 Insights on Innovation series. Andre Barentz, an idea chief on lean advancement and previous Director of Innovation Labs at Allstate, will layout a lean working structure focused on item and portfolio the executives that works for new companies and enormous endeavors, alike.In this meeting, you'll learn:

RSVP: How to grow and profit sustainably through technology innovation in 2020