Eddie Gallagher busted down one rank after being found guilty of posing for photo with ISIS...

SFC Jim Ruether
1.05K
12
10
3
3
0
He was posing with a dead ISIS fighter along with several other team members after the skirmish was over and they were doing BDA. 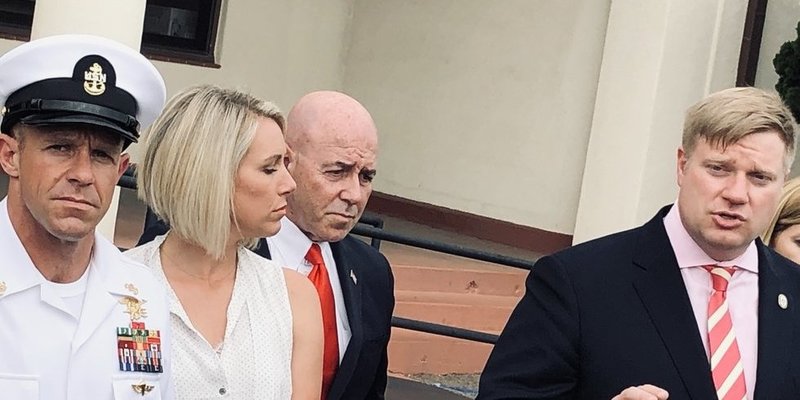 Eddie Gallagher busted down one rank after being found guilty of posing for photo with ISIS...

Eddie Gallagher and the changing story of a death in Iraq

Three years ago members of Alpha Platoon did the unthinkable: they broke the "code of silence" and accused their Navy SEAL Chief Eddie Gallagher, a man they ...

Thank you my friend SFC Jim Ruether for posting the news that Navy SEAL Chief Eddie Gallagher was busted down in reduction in rank to E-6, along with four months confinement and forfeiture of pay for posing with a dead ISIS fighter along with several SEAL team members.
The jury found him guilty on only one charge on Tuesday: unlawfully posing for a picture with a human casualty. Prosecutors showed two photos of Gallagher posing with a body throughout his trial. Other SEALs, including some witnesses who testified against him, were also in the photos.
He was found not guilty of premeditated murder over an alleged stabbing of a wounded ISIS fighter in Mosul in 2017.

Eddie Gallagher and the changing story of a death in Iraq
https://www.youtube.com/watch?v=GDARo8VPsLk

SFC Jim Ruether
3 y
Sounds like the Navy intended to release him from the military and reduce him one rank, with forfeiture of pay for four months and 4 months of jail time. But he was confined for 8 months while waiting to get his day in court, so no jail time for this seal. It was proven in court that evidence was withheld by the prosecutor and others falsified their testimony to get immunity. He decided to terminate his enlistment immediately so he will retire at his present rank/pay grade with no reduction in his rank except in his military records later this year.
(2)
Reply
(0)

SGT David A. 'Cowboy' Groth
Posted 3 y ago
Better than being booted out.
(1)
Comment
(0)
Show More Comments
Read This Next
RallyPoint Home