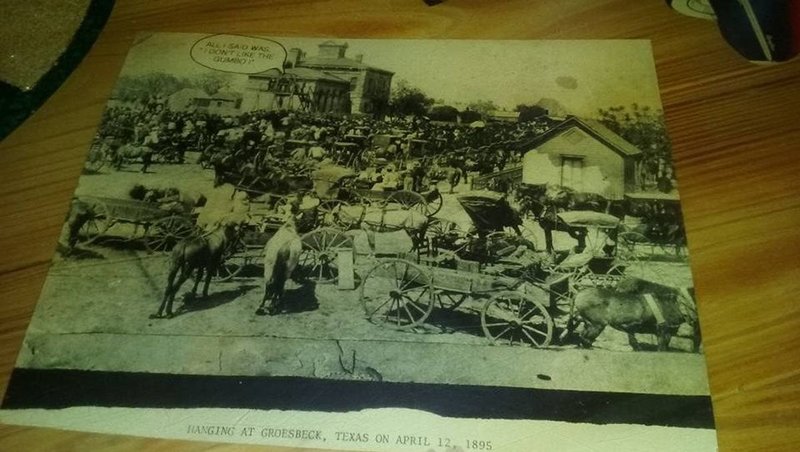 Posted from usatoday.com
Posted in these groups: Joe's Crab Shack

Cpl (Join to see)
Edited 4 y ago
Posted 4 y ago
To all present. The article posted below was written in July 2017 featuring the exact same picture and as I suspected, it was a public execution. Read the caption under the image; "This photo of the hanging of Richard Burleson in Limestone in 1895 shows the vast crowds that public executions once drew."

The entire media narrative is nothing more than an attempt to create more racial divide. Not every hanging was a lynching, some were just executions for capital crimes.

Also, considering the Pecan Valley Genealogical Society of Brown County, Texas states on April 12, 1895, at Groesbeck, Texas, Limestone County, Richard Burleson was hanged for the murder of James Garrett McKinnon for which he had been convicted.

Please stop believing everything the fake media is selling and what they are selling is ratings for advertising space.

Before lethal injections and electric chairs, the preferred method of death-penalty execution in Texas was hanging, conducted by local sheriffs at their county jails, not at prison facilities.

SFC Stephen Atchley
4 y
Thanks for the context.

Still a strange picture to include on a restaurant table.
(1)
Reply
(0)

Cpl (Join to see)
Posted 4 y ago
Time to play devil's advocate... Just by looking at the picture, how do we know it was a lynching? Could it have been capital punishment? Most of the lynchings we know about were not public, they were private in a public place performed in the dead of night by the democrat party's kkk.
(2)
Comment
(0)

Sgt Kelli Mays
4 y
Cpl (Join to see) you are right. we do not know what is really going on....after all...lynching was the capital punishment back then for someone convicted of a crime...though, many were convicted without any real evidence....but still...you are correct. we do not really know the situation of the photo.
(1)
Reply
(0)