Maj Marty Hogan
5.19K
129
27
27
27
0
Theodore Roosevelt Jr. (/ˈroʊzəvɛlt/ ROH-zə-velt;[a] October 27, 1858 – January 6, 1919) was an American statesman, author, explorer, soldier, and naturalist, who served as the 26th President of the United States from 1901 to 1909. He also served as the 25th Vice President of the United States from March to September 1901 and as the 33rd Governor of New York from 1899 to 1900. As a leader of the Republican Party during this time, he became a driving force for the Progressive Era in the United States in the early 20th century. His face is depicted on Mount Rushmore, alongside those of George Washington, Thomas Jefferson, and Abraham Lincoln.
Roosevelt was born a sickly child with debilitating asthma, but he successfully overcame his physical health problems by embracing a strenuous lifestyle. He integrated his exuberant personality, vast range of interests, and world-famous achievements into a "cowboy" persona defined by robust masculinity. Home-schooled, he began a lifelong naturalist avocation before attending Harvard College. His book, The Naval War of 1812 (1882), established his reputation as both a learned historian and as a popular writer. Upon entering politics, he became the leader of the reform faction of Republicans in New York's state legislature. Following the near-simultaneous deaths of his wife and mother, he escaped to a cattle ranch in the Dakotas. Roosevelt served as Assistant Secretary of the Navy under President William McKinley, but resigned from that post to lead the Rough Riders during the Spanish–American War. Returning a war hero, he was elected Governor of New York in 1898. After the death of Vice President Garret Hobart, the New York state party leadership convinced McKinley to accept Roosevelt as his running mate in the 1900 election, moving Roosevelt to the prestigious but powerless role of vice president. Roosevelt campaigned vigorously and the McKinley-Roosevelt ticket won a landslide victory based on a platform of peace, prosperity, and conservatism.

Following McKinley's assassination in September 1901, Roosevelt became president at age 42, and remains the youngest president. As a leader of the Progressive movement, he championed his "Square Deal" domestic policies, promising the average citizen fairness, breaking of trusts, regulation of railroads, and pure food and drugs. Making conservation a top priority, he established many new national parks, forests, and monuments intended to preserve the nation's natural resources. In foreign policy, he focused on Central America, where he began construction of the Panama Canal. He expanded the Navy and sent the Great White Fleet on a world tour to project the United States' naval power around the globe. His successful efforts to broker the end of the Russo-Japanese War won him the 1906 Nobel Peace Prize. He avoided the controversial tariff and money issues. Elected in 1904 to a full term, Roosevelt continued to promote progressive policies, but many of his efforts and much of his legislative agenda were eventually blocked in Congress. Roosevelt successfully groomed his close friend, William Howard Taft, and Taft won the 1908 presidential election to succeed him. In polls of historians and political scientists, Roosevelt is generally ranked as one of the five best presidents.[2]

Frustrated with Taft's conservatism, Roosevelt belatedly tried to win the 1912 Republican nomination. He failed, walked out, and founded a third party, the Progressive, so-called "Bull Moose" Party, which called for wide-ranging progressive reforms. The split allowed the Democrats to win the White House. Following his election defeat, Roosevelt led a two-year expedition to the Amazon basin, where he nearly died of tropical disease. During World War I, he criticized President Woodrow Wilson for keeping the country out of the war with Germany, and his offer to lead volunteers to France was rejected. Though he had considered running for president again in 1920, Roosevelt's health continued to deteriorate, and he died in 1919. 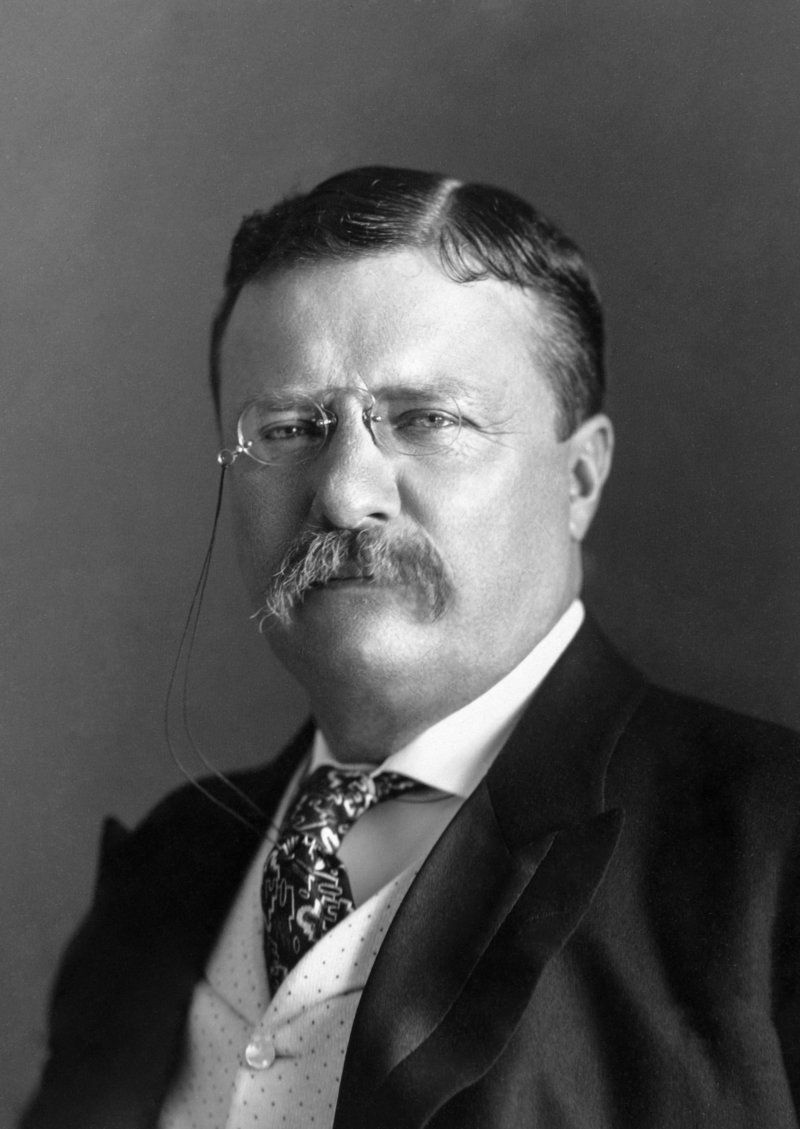 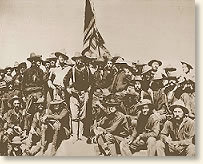 Thanks you Maj Marty Hogan for reminding us that today is the anniversary of the birth of American statesman, author, explorer, soldier, and naturalist, who served as the 26th President of the United States from 1901 to 1909 Theodore Roosevelt Jr..
This article fails to mention the Teddy Bear which was named in his honor.
Images: 1898-07-01 Roosevelt (center) and the Rough Riders after the battle of San Juan Hill; 1898 Teddy Roosevelt in his Rough riders uniform; Teddy Bear; Clifford Berryman's 1902 cartoon that lampooned T.R.'s bear hunt
"Did you know that the Teddy Bear was invented in honor of President Theodore Roosevelt? It all began when Theodore Roosevelt was on a bear hunting trip near Onward, Mississippi on November 14, 1902. He had been invited by Mississippi Governor Andrew H. Longino, and unlike other hunters in the group, had not located a single bear.

Roosevelt's assistants, led by Holt Collier, a born slave and former Confederate cavalryman, cornered and tied a black bear to a willow tree. They summoned Roosevelt and suggested that he shoot it. Viewing this as extremely unsportsmanlike, Roosevelt refused to shoot the bear. The news of this event spread quickly through newspaper articles across the country. The articles recounted the story of the president who refused to shoot a bear. However, it was not just any president, it was Theodore Roosevelt the big game hunter!

A political cartoonist by the name of Clifford Berryman read the article and decided to lightheartedly lampoon the president's refusal to shoot the bear. Berryman's cartoon appeared in the Washington Post on November 16, 1902. A Brooklyn candy shop owner by the name of Morris Michtom saw the cartoon and had an idea. He and his wife Rose were also makers of stuffed animals, and Michtom decided to create a stuffed toy bear and dedicate it to the president who refused to shoot a bear. He called it 'Teddy's Bear'.

After receiving Roosevelt's permission to use his name, Michtom mass produced the toy bears which were so popular that he soon founded the Ideal Toy Company. To this day the Teddy Bear has worldwide popularity and its origin can be traced back to Theodore's fateful hunting trip in 1902."
https://www.nps.gov/thrb/learn/historyculture/storyofteddybear.htm

Did you know that the Teddy Bear was invented in honor of President Theodore Roosevelt? It all began when Theodore Roosevelt was on a bear hunting trip near Onward, Mississippi on November 14, 1902. He had been invited by Mississippi Governor Andrew H. Longino, and unlike other hunters in the group, had not located a single bear.

CWO3 (Join to see)
Posted 5 y ago
A very good example of a leader in all positions he filled. Theodore Roosevelt's foreign policy: "speak softly, and carry a big stick." Thanks for sharing.
(9)
Comment
(0)

PO1 (Join to see)
Posted 5 y ago
He was the Ross Perot of his day, but on the progressive side, which split the Republican vote and ensured another Progressive Democrat ascended to the white house.
(6)
Comment
(0)
Show More Comments
Read This Next
RallyPoint Home