SFC (Join to see)
1.45K
27
5
9
9
0
A midair collision between an Air Force F-16 and a Cessna occurred because both pilots couldn't see each other and questionable directions were given to the F-16 pilot by air traffic controllers, according to an Air Force investigation report released on Friday.

The July 7, 2015, crash over South Carolina resulted in the deaths of the Cessna pilot and passenger. The damaged F-16 flew for three minutes before Maj. Aaron Johnson ejected safely with only minor injuries. The jet was destroyed when it crashed about 25 miles north of Charleston.

The F-16CM, assigned to the 20th Fighter Wing at Shaw Air Force Base in South Carolina, was headed to Charleston when air traffic control told the fighter pilot that the Cessna 150M was approaching, the Air Combat Command Accident Investigation Board report said.

The controller directed the F-16 pilot to a 180-degree left turn as the Cessna pilot was ascending into the jet’s path. According to radar information and a data-based animation, the F-16 pilot “had an obstructed view and insufficient time to avoid the collision,” the report said.

Maj. Gen. Scott Kindsvater, president of the Air Combat Command Accident Investigation Board, concluded that in addition to both pilots being unable to “see and avoid” each other, the controller’s direction for the F-16 to turn left also contributed to the collision, according to the report.

Kindsvater found that several other factors contributed to the accident, “including the controller’s directive for the military aircraft to operate near an uncontrolled airfield, the timing of the controller directives, and the pilots’ non-use of additional systems or safeguards which may have aided situational awareness,” the report states.

“While all concerned acted with the best intentions, the situation left little margin for error,” he said in a statement.

The National Transportation Safety Board’s report also concluded that the pilots were most likely unable to see and avoid each other, and that the air traffic controller warned the F-16 pilot of traffic ahead.

The pilot of the Cessna, Joseph Johnson, 30, and his passenger father, Michael Johnson, 68, both of Moncks Corner, South Carolina, died of accidental, blunt force and body trauma, a coroner found.

Charlsy Panzino covers the Guard and Reserve, training, technology, operations and features for Army Times and Air Force Times. Email her at [login to see] . 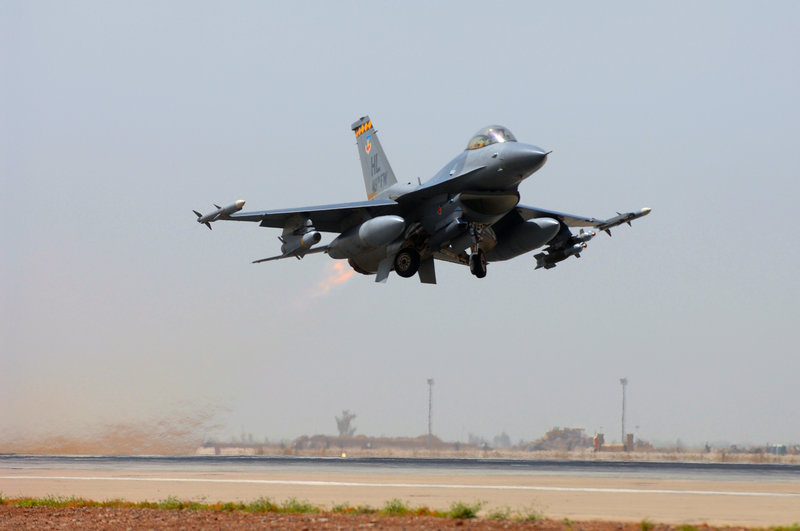 LTC Stephen F.
Posted >1 y ago
Even though it over a year old, it is very sad news SFC (Join to see) that the crash investigation has determined that questionable directions were given to the F-16 pilot by air traffic controllers which resulted in an F-16 colliding mid-air with a Cessna over South Carolina resulted in the deaths of the Cessna pilot and passenger.
Although the USAF pilot Maj. Aaron Johnson ejected safely with only minor injuries, I expect the knowledge that he was involved in the fatal air collisions has caused him grief.
Prayers for Maj. Aaron Johnson and the families of the victims as they grieve.
LTC Stephen C. Capt Seid Waddell CW5 (Join to see) SFC William Farrell SSgt (Join to see) SGT (Join to see) SP5 Mark Kuzinski SGT Forrest Stewart SPC (Join to see) SrA Christopher Wright
Maj William W. 'Bill' Price Capt Tom Brown SMSgt Dr. G. A. Thomas SFC James J. Palmer IV aka "JP4"SSgt Robert Marx TSgt Joe C. SGT Robert George PO2 Ed C.
(6)
Comment
(0)