After the crew administered extensive ground checks, the plane took off and climbed 10,000 feet in altitude. Schmidt and Draeger conducted handling checks, tested backup systems and flew at speeds of 231 knots before landing, Schmidt told reporters in a Dec. 20 conference call.

“I’ve been a part of this team since the beginning, and it was really exciting to be the first to train and fly,” Schmidt said. “The aircraft met all expectations. It’s well designed and offers superior handling characteristics. The cockpit is intuitive, spacious and adjustable, so everything is within easy reach.”

“It was a smooth flight and a successful test mission,” Draeger, who sat in the instructor's seat, stated in a news release. “I had a great all-around view throughout the flight from the instructor’s seat, which is critical during training.”

The flight was a moment of jubilation for Boeing, which began developing its T-X design with Saab 36 months ago, said Boeing's T-X program manager Ted Torgerson. Since then the team has worked through system requirements review, preliminary design review, critical design review, ground tests and finally flying one of its two demonstrator planes. The first flight of the second jet is set for early 2017.

"We went from CDR to first flight in 12 months. We don't do that very much at the Boeing Company," Torgerson said. "I don't want to say it has not been done, but for a manned aircraft to go through a complete production-ready design, that is as fast and as efficient as we've ever been through it."

After data from the first flight is analyzed by the engineering team, Schmidt hopes to conduct additional test flights in the next few days, he said.

The Boeing-Saab collaboration is the last of the four major prime contractors to have flown its offering, taking off just days before the Air Force is set to release its final request for proposals,which Torgerson said is expected to be issued around Dec. 30.

Northrop Grumman purportedly flew its clean-sheet design in August, although the company refuses to confirm press reports. Lockheed Martin and Raytheon, however, are proposing modified versions of foreign trainers already in service. Lockheed and KAI’s T-50A, a variant of the T-50, flew for the first time this June. Meanwhile, Raytheon, which partnered with CAE, Honeywell and Leonardo, began flight testing its T-100 this summer. That aircraft is based on Leonardo's M-346.

Aviation Week recently reported that Sierra Nevada Corp. and Turkish Aerospace Industries plan to propose their own aircraft for the T-X competition and have a prototype in development. Sierra Nevada has not responded to repeated requests for comment.

Despite the late start on flight tests compared to most of its competitors, Schmidt and Torgerson said they're confident the Boeing-Saab team will be able to expand the flight envelope of the aircraft and capture the test data required by the Air Force.

"I think our biggest challenge here is we're in St. Louis in the winter time," Schmidt joked. "But other than that, we've got a pretty clear path to get the data we need in the time allotted."

If the RFP is released on Dec. 30, the team will have until June 30 to submit its flight performance data to the Air Force. Its initial proposal would be due three months earlier, on March. 30, Torgerson notes. 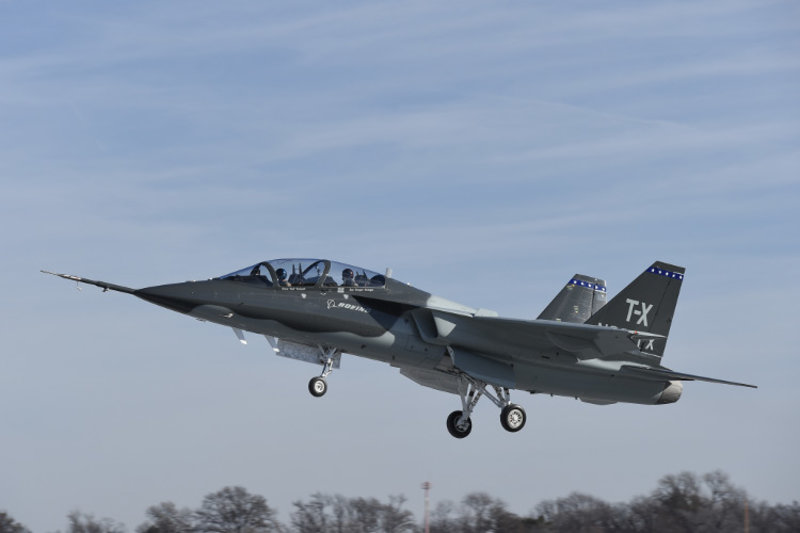 SFC George Smith
Posted >1 y ago
interesting story ... Like the idea of a new trainer...
(2)
Comment
(0)
Read This Next
RallyPoint Home