Hogan is regarded by many as the greatest professional wrestler of all time.[6] According to IGN, he is "the most recognized wrestling star worldwide and the most popular wrestler of the 1980s".[7] Hogan enjoyed considerable mainstream popularity between 1984 and 1993 as a face in the World Wrestling Federation (WWF, now WWE), which continued for the remainder of the 1990s in World Championship Wrestling (WCW), where he turned heel in 1996 and performed as the villainous New World Order (nWo) leader "Hollywood" Hulk Hogan.[8]

A regular pay-per-view main eventer and box office draw in both organizations, Hogan headlined the premier annual events of the WWF and WCW, WrestleMania a record eight times (also being the only one who closed five WrestleMania events in a row) and Starrcade three times; against Sting, he closed the most profitable WCW pay-per-view ever at the 1997 edition of Starrcade.[9] Aside from those promotions, he has notably performed for the American Wrestling Association (AWA), New Japan Pro Wrestling (NJPW) and Total Nonstop Action Wrestling (TNA). He is a twelve-time world champion: a six-time WWF World Heavyweight Champion/WWF Champion (with his last reign being as Undisputed WWF/WWE Champion) and a six-time WCW World Heavyweight Champion. Hogan's first WCW World Heavyweight Championship reign is the longest in history, while his first WWF Championship reign is the third-longest ever (and the longest of the 1980s). He was the first wrestler to win consecutive Royal Rumbles, in 1990 and 1991, and was inducted into the WWE Hall of Fame class of 2005, by Sylvester Stallone.

During and after wrestling, Hogan had an extensive acting career, beginning with his 1982 antagonist role in Rocky III. He has starred in several movies (including No Holds Barred, Suburban Commando and Mr. Nanny) and three television shows (Thunder in Paradise, Hogan Knows Best and China, IL), as well as in Right Guard commercials and the video game, Hulk Hogan's Main Event. He was also the frontman for The Wrestling Boot Band, whose sole record, Hulk Rules, reached #12 on the Billboard Top Kid Audio chart in 1995. 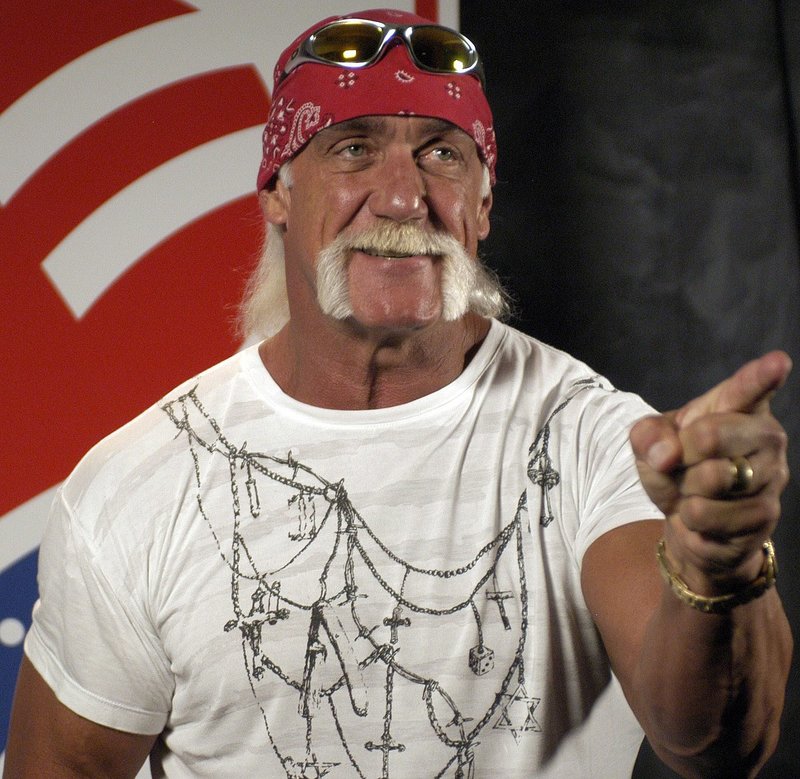 Thank you my friend Maj Marty Hogan for making us aware that August 11 is the anniversary of the birth of American retired professional wrestler, actor, television personality, entrepreneur and musician Terry Gene Bollea better known by his ring name Hulk Hogan.

Mini Bio
One of the greatest, most popular, most hated and charismatic wrestlers of all time, Hulk Hogan is one of the men who helped parlay the circus-like world of professional wrestling from cult following into the forefront of American entertainment. What many people who know about Hogan don't know is he was in the "sport" for several years in virtual obscurity before hitting the big time.
Hogan was born Terry Gene Bollea in Augusta, Georgia, to Ruth V. (Moody), a dance teacher, and Peter Bollea, a construction foreman. He is of Italian (from his paternal grandfather), Irish, English, Scottish, and French descent. He was raised in Port Tampa, Florida.
Hogan made his pro debut in 1978 and wrestled as "Sterling Golden" before becoming "Hulk." Hogan was getting main event matches while wrestling in the American Wrestling Alliance (AWA) in the early 1980s before he was cast as Thunderlips in Rocky III (1982). That bit of casting propelled Hogan into the spotlight and he was soon to enter the World Wrestling Federation (WWF) in 1983. At the time, the WWF was just beginning to go from local television (they were based in the Northeast U.S.) to national, and Hogan's personality (and some well-done marketing and PR, plus the Wrestlemania series) helped to transform not only the WWF, but wrestling into the big show it is today. Hogan won the WWF title numerous times, and was credited with dealing André the Giant his first loss in pro wrestling. Hogan was soon seen everywhere -- television, cartoons, movies, records and lunch boxes -- but he was a part of the steroid scandal in the WWF, and quietly left the organization. Hogan laid low in wrestling circles, but continued to act before coming back, this time with World Championship Wrestling (WCW), the WWF's bitter rival. Hogan helped create the New World Order, the main bunch of badmen in WCW, and became more popular than ever. He abandoned his trademark red and yellow colors for black, and even dyed his beard black. He still wrestles as of today, and, like it or not, is probably one of the best entertainers in any form of show business. He always put on a show.
- IMDb Mini Biography By: Ken Severson

Personal Quotes (9)
1. To all my little Hulkamaniacs, say your prayers, take your vitamins and you will never go wrong.
2. (As Hollywood Hogan) "Blood is thicker than New Blood...dude!"
3. Watcha gonna do when the hulkster runs wild on YOU?
4. This is where the power lies!
5. Well, ya know something Mean Gene...
6. Whatever happens with wrestling, my family comes first. Wrestling's in my blood, but my family's in my heart
7. (Regarding his height loss) "I used to be 6ft 7in, but after knee, neck and back surgeries, I'm now about 6ft 4in."
8. Eight years ago, I used offensive language during a conversation. It was unacceptable for me to have used that offensive language; there is no excuse for it; and I apologize. (Statement to PEOPLE magazine, after WWE terminated their relationship, and removed Hogan from the WWE website.)
9. [on Randy Savage's death] He had so much life in his eyes and in his spirit. I just pray that he's happy and in a better place and we miss him.

Bio: Hulk Hogan, American Made (FULL Documentary)
Full Documentary on Biography Channel Featuring wrestling legend Hulk Hogan
Terry Gene Bollea (born August 11, 1953), better known by his ring name Hulk Hogan, is an American retired professional wrestler, actor, television personality, entrepreneur and musician.
Hogan is regarded by many as the greatest professional wrestler of all time. According to IGN, he is "the most recognized wrestling star worldwide and the most popular wrestler of the 1980s". Hogan enjoyed considerable mainstream popularity between 1984 and 1993 as a face in the World Wrestling Federation (WWF, now WWE), which continued for the remainder of the 1990s in World Championship Wrestling (WCW), where he turned heel in 1996 and performed as the New World Order (nWo) leader "Hollywood" Hulk Hogan.
https://www.youtube.com/watch?v=am-pbQFif4Q

SSgt Boyd Herrst
Posted >1 y ago
I use to watch guys like “Dutch Schultz”
No-no Brazil... and others.. I could see it was kinda fake... my uncle took me to Detroit once to Cobo Hall ... it rained that day, not many of those of questionable character hanging out.. Uncle ended up paying and I got in free that 1st and only time... We left and went upstairs to the bus stop and a Ross the street and got a monster ham n cheese and onion sandwich and fries .. and a large root beer for $4... (‘63... i was going on Ten). We got back about home about 2 in the afternoon(didn’t have S.M.A.R.T [Sou.Mi.Area Rapid Transit] then). Had to go get the Greyhound.. the ticket agent made us sit right where he could watch us.. When our bus was ready, He had a security guard walk us over and put us on the bus... rode all the way to Wayne.. let us off by the sav-on and the Standard Gas filling station.. from there it was about 5 to 6 blocks to home... We didn’t know if the driver would let us off or not.. we were supposed to have an adult meet us..
Mom had drove there to get us... Grandma (uncle rich’s mom)was there with another Aunt.. (uncle Rich’s older sis)
Grandma proceeded to smack Rich around cursing him in Spanish... what she said I figured to not be so kind..go figure...
I got my turn when mom got home... whoo-boy did I get tanned... Dad didn’t do anything.. he figured mom did good enough... wrestling.. wasn’t what it was made out to be.. I got more out of being chased around the basement and backyard... I thought mom was exhausted.. she just got warmed up..
I got my tanning and went to my room..
Gee,... just for going to Detroit !...
(2)
Comment
(0)