LTC (Join to see)
9.15K
30
22
9
9
0
At the 5-minute mark the video shows various armor crew members being asked what type of ammunition the main gun uses. The Gunner describes four different types of rounds:Sabo, Heat, multi-purpose anti-tank and The Beehive round. Does the US Army still use a beehive round in the Abrams tank? When I was in armor, we did not have the Beehive round available. I recall it was only used in Vietnam under special circumstances with the old M60 tank.
Posted in these groups: 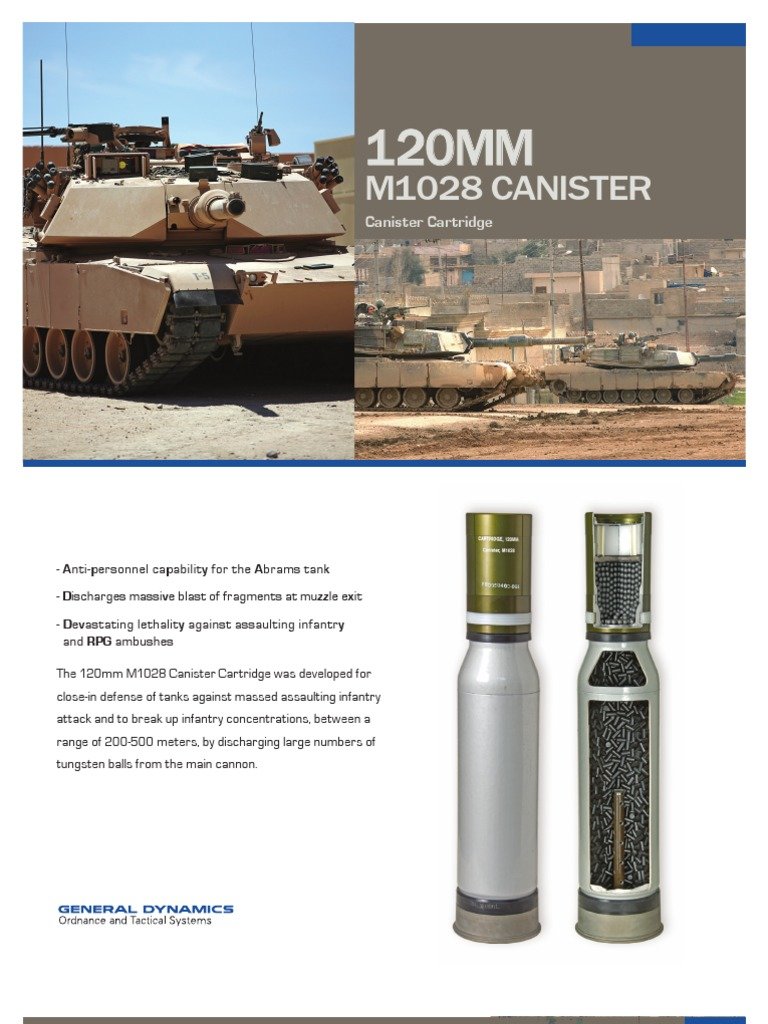 LTC (Join to see) the U.S. Army has not had an active inventory beehive [flechette] tank round since the M-48 Patton tank [90mm main gun] was replaced by the M60 tank [105mm main gun] early in the Vietnam War.
Flechette rounds were primarily artillery rounds and were rudimentary in the 1300s.
Main battle tanks have been firing more advanced types of anti-personnel rounds.
120mm M1028 Canister Cartridge was developed for close-in defense of tanks against massed assaulting infantry attack and to break up infantry concentrations, between a range of 200-500 meters, by discharging large numbers of tungsten balls from the main cannon.
Images: M1028 120mm antipersonnel round
The Armor and Infantry Center at Fort Benning has been interested in developing a multi-functional round for the 120mm main tank gun.

"XM1069 Advanced Multipurpose Munition
Advanced Multi-Purpose (AMP) round
The advanced multi-purpose (AMP) round is a line-of-sight munition with three modes of operation: point detonate, delay and airburst. This essential capability required in urban environments allows the tank crew to defeat AT guided-missile teams at ranges of 50 to 2,000 meters with a precision lethal airburst. The point-detonate and delay modes allow for obstacle reduction (OR), bunker defeat and a wallbreach capability for dismounted infantry. The AMP round also reduces the logistics burden by replacing four existing rounds (M830 high-explosive (HE) AT, M803A1 multipurpose HEAT, M1028 canister and M908 HE-OR).

By 2013 the Advanced Multi-Purpose, or AMP, was ready to enter into the Engineering and Manufacturing Development phase after a prototype successfully demonstrated Technology Readiness Level 6 through a science and technology program at Picatinny Arsenal, N.J., in 2006.

The new round will replace a rapidly aging inventory of tank munitions. The new AMP round is long overdue. Tankers have struggled for years with a growing number of main gun rounds capable of defeating single types of threats; this resulted in a mix of ammunition types carried on board the tank that was always a problem.

This is not just an issue of logistics. It created both operational and survival issues. No one wants to get into a tank engagement and not have the right ammunition to defeat the range of threats on the future battlefield. The AMP round is a game changer that greatly increases tank effectiveness. It is a very modest and affordable investment, spread over 30 years, to field a highly versatile and reliable round with the capabilities needed for the future fight.

The AMP round replaced four tank rounds now in use. The first two are the M830, High Explosive Anti Tank, or HEAT, round and the M830A1, Multi-Purpose Anti Tank, or MPAT, round. The latter round was introduced in 1993 to engage and defeat enemy helicopters, specifically the Russian Hind helicopter. The MPAT round has a two-position fuze, ground and air, that must be manually set.

The M1028 Canister round is the third tank round being replaced. The Canister round was first introduced in 2005 by the Army to engage and defeat dismounted Infantry, specifically to defeat close-in human-wave assaults.

The M908, Obstacle Reduction round, is the fourth that the AMP round will replace; it was designed to assist in destroying large obstacles positioned on roads by the enemy to block advancing mounted forces.

The AMP round is a significant advance in tank ammunition capability. It uses an ammunition data link and a multi-mode, programmable fuze to achieve multiple effects that currently can only be achieved by selecting, loading and firing one of four different 120mm tank rounds the AMP round will replace. Together with the two additional capabilities provided by the AMP round, a single AMP round can now achieve desired effects against ATGM teams, reinforced walls, bunkers, light armor, dismounts, and obstacles.

The Army's Armament Research, Development and Engineering Center, Picatinny Arsenal, NJ demonstrated the AMP capability using two key technologies that are actually quite mature, an ammunition data link and a multi-mode programmable fuze. Using these technologies, commands to select the desired effect are transmitted via data link to the fuze on the round. The fuze setting determines whether the round will function with a point-detonate, point-detonate delay, or airburst effect.

Battle Carry is a term used by tank crews during combat when they are preparing to engage the enemy; they load the round they believe is the most likely needed to defeat the most likely threat target. If AMP were available to Army tankers, they'd be able to Battle Carry one round capable of achieving the desired effect across a wide range of targets.

“Battlecarry” is an approach in which tankers determine what type of round to chamber in anticipation of the next engagement. U.S. tank doctrine dictates that the commander will deter- mine the type of round battle carried based on his mission and assessment of the threat. The tank commander deter- mines the most likely target in a given tactical situation and loads the appro- priate round, thereby enabling the gunner to engage anticipated targets in the shortest period.

When the next target presenting itself is not the one anticipated, this creates a battlecarry dilemma. For example, if the crew is battle carrying a canister round (anti-personnel) and a non-personnel threat appears, such as a lightly armored vehicle, the commander must decide whether to de-chamber the round or fire it to chamber the appropriate round.

The additional time required to either fire or extract the chambered round, followed by reloading the main gun and engaging the target, puts the crew at a much higher risk of being first engaged by the enemy.

Based on the AMP round's performance during development, many tankers and Army capabilities developers believe the AMP will also provide warfighters an improved Battle Carry capability.

Most importantly, the new AMP round improves Abrams tank and crew survivability by dramatically reducing, if not eliminating, the existing “battlecarry dilemma.” By giving the Abrams versatility to operate across the range of military operations where mobile protected firepower is required, the ABCT will be a more lethal and more powerful formation than ever."
https://www.globalsecurity.org/military/systems/munitions/m1069.htm

Background on the 900mm tank round from globalsecurity.org/military/systems/munitions/m377.htm
M377 90-mm canister anti-personnel tank round
The 90 mm M377 canister anti-personnel round has a canister projectile filled with small flechettes for anti-personnel use at short ranges [some sources erroneously report this round as 105mm rather than 90mm]. It is stated to be particularly effective against personnel in dense foliage. Although the US Army was apparently the only armed force to employ this round and the guns used to fire it are no longer in US service, there is still the possibility that existing stocks of these rounds might be passed to other nations.

The 90 mm M377 canister cartridge is a fixed round, with a canister projectile crimped into a brass cartridge case. A single gilding-metal drive band encircles the canister base assembly. The canister projectile has a thin steel cylindrical body welded to a heavy steel cup-shaped base assembly. The blunt-nosed body has four equally spaced axial grooves extending from the forward edge of the canister body along about half its length. The body interior is filled with 5,600 flechettes, each weighing approximately 0.5 g, held in place by a crimped closing cup.

When the gun is fired, the canister body is propelled along the barrel. As it emerges from the gun muzzle, air pressure on the closing cup and the centrifugal forces acting on the body combine to cause the canister to break open along the four axial grooves. The flechettes are then free to disperse across a conical angle of 14º. The maximum effective range of the flechettes is approximately 400 m, at which range the arc is about 96 m wide. The 90 mm M377 canister round uses a brass M108B1 rimmed cartridge case with an M58 black-powder percussion primer press-fitted to the base. The propelling charge is 4.08 kg of M6 propellant.

The M4 General Sherman was the main battle tank designed and built by the United States for the conduct of World War II. The Sherman's low-velocity 75 or 76 mm gun was chosen because the Army's artillery branch wanted a cheap, reliable weapon for fire support. The T26E3 with the 90mm gun was adopted as the Army's standard tank in March 1945 under the designation of M26 Heavy Tank with the name 'Pershing' after the founder of the US Tank Corps in World War 1, General John J Pershing.

Named for Gen. George S. Patton, the M47 went into production in April, 1951. The main gun was the M36 90mm gun with an M12 optical rangefinder fitted. Developed from the M47 "General Patton" tank, the M48 was the mainstay of the US Army and Marines in Vietnam. Canister and HE were the primary main gun ammunition types used in Vietnam. Beehive was effective, but usually in short supply. WP was useful, but dangerous to carry since it ignited if split open by a mine or RPG strike, so crews tended to expend it as soon as possible. HEAT briefly was popular after NVA tanks were engaged at Bien Het, but HE was usually preferred against bunkers. Production on the M60 Patton began in 1960, and the M48 was withdrawn from American service in favor of the M60, a further development of the M48 carrying a 105mm gun. The M48 Patton was the last platform to use the M377 90-mm canister anti-personnel tank round."

The advanced multi-purpose (AMP) round is a line-of-sight munition with three modes of operation: point detonate, delay and airburst. This essential capability required in urban environments allows the tank crew to defeat AT guided-missile teams at ranges of 50 to 2,000 meters with a precision lethal airburst. The point-detonate and delay modes allow for obstacle reduction (OR), bunker defeat and a wallbreach capability for dismounted...

LTC (Join to see)
Posted >1 y ago
Sir, it must be available for the Canadian. Not sure if they need a one-star general to approve using of a shotgun or beehive around for the 120mm
(3)
Comment
(0)

Capt Gregory Prickett
>1 y
LTC (Join to see) - try this one. The pdf is linked on this page. https://www.gd-ots.com/munitions/large-caliber-ammunition/120mm-m1028/

The 120mm M1028 Canister Cartridge was developed for close-in defense of tanks against massed assaulting infantry attack and infantry concentrations.