When I Deployed To Iraq, My Mom Fought Her Own War At Home


Unlike the parents of fallen U.S. Army Capt. Humayun Khan, my mother was blessed with the opportunity to see her son return from Iraq in 2004. She has always considered herself one of the fortunate military parents.

It must have been terrifying as she watched the invasion of Iraq live from her living room, knowing that if she just watched closely enough, she might get a chance to see her son flash across the screen for possibly the last time. I always assumed that my mother was fine, because she was no stranger to war. My grandfather served bravely in World War II, Korea, and Vietnam, along with my two uncles in more recent conflicts. I was just a 22-year-old kid, always inspired by the fact that my family had always been willing to sacrifice it all on the battlefield; to her, it meant something different.


My mother had been a single parent selflessly providing for me well before I was old enough to serve. She spent her late 20s and 30s working multiple jobs and eventually settled at Walmart where, after years of continuous employment, she barely made enough to put food on the table. Her struggle was dramatically compounded when she had brain surgery to remove a tumor and sequentially became an epileptic with weekly generalized tonic-clonic seizures that made her lose consciousness and suffer from violent muscle contractions. At the time, I didn’t fully understand the magnitude of our situation, but as the oldest child at the early age of 11 years old, I suddenly became her caregiver.

The first time I saw my mother convulsing on the floor, I called 9-1-1. When she returned from the hospital, I learned that calling 9-1-1 was no longer an option. As it turns out, having multiple seizures means being forced to give up your driver’s license. We were a working poor family on a single income, and my mother couldn’t walk to work. So rather than rely on the safety net that so many of us take for granted, she trained me to conduct first aid and take care of her during her darkest moments without the support of an EMT or hospital staff. That was our reality throughout my childhood.

When I become of age to join the military, I told her that I wanted to become an U.S. Army paratrooper. She was still very much struggling with her health, but without hesitation selflessly supported my decision to serve our country. Like many Americans, it’s just what our family did — it’s our heritage, and our obligation to others.

It wasn’t until I returned home from Iraq in 2004 that I truly understood the sacrifices my mother had made. She didn’t suddenly become healthy or financially stable, she simply persevered without my support. Unlike the families of most of my fellow soldiers, she was unable to see me off to Iraq or welcome me home at the airfield, because her medical condition prevented her from traveling long distances.

During my R&R back home after my second overseas tour of duty, I noticed a massive stack of VHS tapes that she had used to record the news every day while she was at work with the hope that when she returned she wouldn’t find out that I was injured or killed. At that very moment my brain started racing; I recalled that on one of the rare occasions that I was able to speak to her on the phone from Iraq, I had to quickly hang up amidst mortars exploding in the background around me. I hadn’t been able to call her back for days.


Related: What Happens When A Blue Star Turns Gold »

How must have she felt? How could I have been so insensitive? I suddenly saw that she had been the one who sacrificed — not me. All this time she has been struggling with a crippling condition and never once acted in a way that would make me worry. She acted selflessly without recognition or the need for praise.

This sort of bravery — the quiet, dignified bravery of my mother and so many like her — goes unrecognized by Donald Trump. People like Trump don’t fundamentally understand selfless sacrifice by our military families. They simply beg to be acknowledged, followed, and respected without giving up anything of value. Trump’s delusional response comparing Khizr Khan’s remarks about his personal sacrifice to Trump’s own time in business clearly demonstrate that he can’t begin to fathom what so many have given up for their country.

It is for this reason that Trump’s comments brought back so many memories and angered me to my core. Criticizing Gold Star families for whatever the reason — political or otherwise — is unfathomable and sickening. Military families like the Khans should make us all strive to be better Americans. My mother and the millions of military families throughout our country deserve a commander-in-chief worthy of their sacrifice. 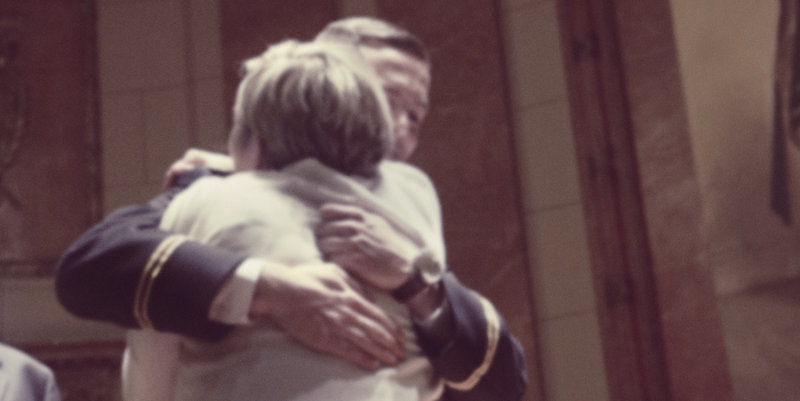 When I Deployed To Iraq, My Mom Fought Her Own War At Home

LTC Stephen F.
Edited 5 y ago
Posted 5 y ago
If the individual who penned the piece you shard believes that Hillary Rodham Clinton is a better candidate for POTUS than Donald Trump he is blind SFC (Join to see)
From his letter I expect he has been drinking the liberal/progressive Kool-Aid from a liberal family.
All service members serve our nation and support the constitution except for a few traitors.
Yes Donald Trump never served; but, HRC served as a Senator and as Secretary of State and she was rated as careless over the handling of classified information by the Director of the FBI who is an ally of hers. Not to mention her lack of leadership in the Benghazi incident.
I was laid up in Walter Reed AMC from significant complications during mitral-valve repair-surgery as OIF kicked off. I had trained some of the infantry soldiers for OIF although most of them fought in Desert Storm. The CENTCOM PAO BG Vince Brooks was a classmate and friend. BG Joe Votel commanded the ranger regiment in the western dessert and three of my friends commanded the brigades rushing towards Baghdad. Another friend was wounded when the Muslim SGT threw frag grenades into three tents of the 101st Air mobile division before it went over the berm.
I learned long ago that my military assignment dream sheet was not always going to me filled the way I liked it and I did my best to serve wherever I was supposed to as best I could.
COL Mikel J. Burroughs LTC Stephen C. Capt Seid Waddell CW5 Charlie Poulton CW5 (Join to see) SGM David W. Carr LOM, DMSM MP SGT SFC William Farrell SFC James J. Palmer IV aka "JP4" SSgt (Join to see) SSgt Robert Marx TSgt Joe C. SGT (Join to see) SGT Robert Hawks SGT Robert George SGT John " Mac " McConnell SGT Forrest Stewart SP5 Mark Kuzinski SrA Christopher Wright SPC (Join to see)
(3)
Comment
(0)

TSgt Joe C.
Posted 5 y ago
Political crap aside, this was a good read SFC (Join to see); sacrifices come in many forms for sure!
(1)
Comment
(0)
Show More Comments
Read This Next
RallyPoint Home