These were the words that moved U.S. Army Sgt. Timothy Goodrich to tears as he burrowed a shovel into the plot of land where his new home will soon stand. After putting his life on the line in Iraq and Afghanistan, the returning hero and his family will soon receive a small token of appreciation -- a home to call their own.

A large crowd gathered for the groundbreaking ceremony for Goodrich's new house on Nov. 14 at Embrey Mill in Stafford County. Just days before, on Veterans Day, Goodrich received the surprise of his life when the plans for his custom, mortgage-free home were revealed during a Washington Wizards game at the Verizon Center in Washington, D.C.

"I had no idea. I was completely surprised," Goodrich said.

Originally from Baton Rouge, La., Goodrich joined the Army after high school in June 2004. He fought in both Iraq and Afghanistan.

While deployed in Afghanistan in 2012, his base in Kunar was hit by rockets. His leg and jaw shattered, and he suffered a brain injury.

"I've received a lot of different kinds of support, but not everyone is plugged in," Goodrich said. "There are people willing to help, but sometimes you have to find your own way."
Newland Communities, the developer of Embrey Mill, partnered with general contractor Miller & Smith and Operation Finally Home to provide a home for the Goodrich.

Gary Scola, vice president of operations for Newland Communities, said Newland donated the land for the project, but it took a community to make the home happen.

"The response we have gotten from everyone involved in this has been: 'What else can we do?' " Scola said.

Larry Adams-Thompson of Operation Finally Home said the organization is a nonprofit established to bring together builders, suppliers and communities to provide homes for America's military heroes. Over the past 11 years, more than 200 homes either have been completed or are in progress in more than 30 states across the U.S.

"These are folks who have served their country -- all four of them," Thompson said, as he looked toward Goodrich's wife, Jacqueline, and their two children, Lucy, 8, and Judah, 4.
Stafford County also played an integral role in making the new home a reality. On Aug. 16, the Board of Supervisors authorized a donation of $14,044 to Operation Finally Home to cover the cost of water and sewer connection fees.

Dale Hall, vice president of Miller & Smith, said he is grateful to Stafford.

"I am so impressed with Stafford," Hall said. "They didn't just waive all the fees to build this house. They stepped up and paid for those fees. They found the way. That was a great starting point."

Stafford County Commissioner of Revenue Scott Mayausky said the home should be a symbol for Stafford because it represents the coming together of the community.

"The tumult in national politics -- the division we are all feeling -- prevents us from focusing on what is really important," Mayausky said. "And this is what is really important: to honor the men and women who have sacrificed to defend not just their freedom and their family's freedom but to defend the freedom of people half a world away who they have never met and will probably never meet."

"I know I am five months premature, but I want to be one of the first ones from Stafford County to welcome you home, brother," Mayausky added.
Additional building partners for the Goodrich home include Atlantic Builders, Drees Homes, Integrity Homes, K Hovnanian Homes, Lennar and Stanley Martin Homes.

"While Miller & Smith are taking the lead, without each and every one of the builders here today, this would not have happened," Hall said.

Unlike many charities, all of the money donated to OFH for a project goes to building the house and to the family. Newland solved the next piece of the puzzle -- the perfect lot -- by providing a the land.

"Such a big part of Embrey Mill is community," Hall said. "It has a large component of military families and government employees. This is the perfect community for a family."

Goodrich and his family are expected to receive the keys to their new home in March. While thrilled about the new house, to Goodrich, the real gift is the community members who selflessly came together to build a home where he and his family can make new memories.

"I am overwhelmed and excited -- who gives away a house?" Goodrich said. "But it is not about the house; it is the actions of the people. It takes good people with great hearts to do things like this. Each person here today will hold a place in our lives forever."

Information from: The Free Lance-Star, http://www.fredericksburg.com/ 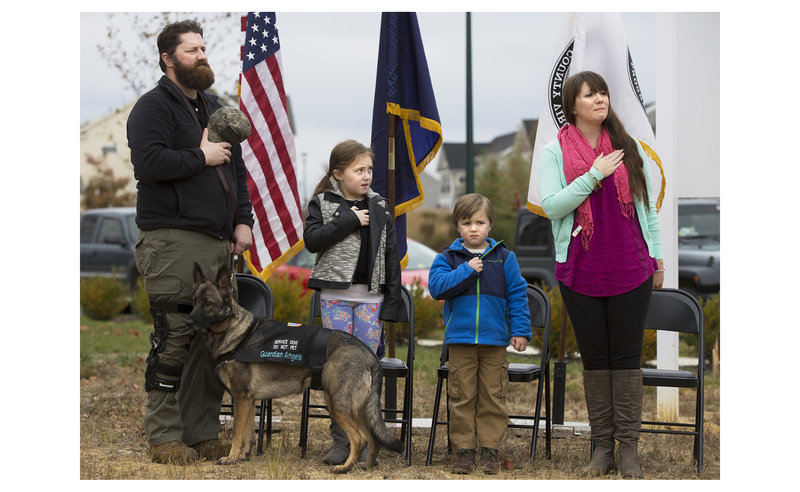