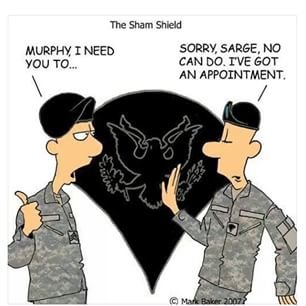 would someone please explain to me what the E-4 mafia is? When and how did it start? I'm an old salty dog (emphasis on old) and I've never heard of this formal or informal organization as it were.
Posted in these groups:

Sgt Aaron Kennedy, MS
Posted 6 y ago
The E4 mafia or LCpl Underground is an informal organization consisting of individuals who are not in a position where "the stripes matter." They have the luxury of going "LCpl / Specialist Don't know" and shrugging their heads where an NCO could never get away with it.

Their major advantage however is that they are virtually invisible. As they are often assigned to "crap details" they tend to be out and about and "hear things" giving them LOTS of information. Not all of it good. It spreads like wildfire.

Additionally, if you need something, sometimes... saying "This place could really use a pool table" can result in a pool table 'magically' appearing.
(235)
Comment
(0)
show previous comments

SPC Dan Kissling
2 y
What the heck? Why you spilling the beans there Sergeant!?
(3)
Reply
(0)

SPC Celestino Alicea
2 y
Spoken like a man whose been there, done that! Period
(0)
Reply
(0)

PO3 Jay Rose
11 mo
PO2 Knight Michael - shipmate, would “Ricky Ninja” not exclusively apply to recruits training at “Great Mistakes,” being that a “Ricky” is a time honored naval title that is only bestowed upon said recruit immediately after graduating from the lowly degree of “Smurf?” We did however have a ‘system’ in place when I was out to sea, those poor bastards who needed to **acquire** something from Supply would come to an individual like myself (an E-4) that could almost magically conjure up the item without a chit of any sort, yet for a nominal fee. This my friends was the “Sea-4 Mafia,” an undersea organization that requires a hoodwinked blood oath for entry, and they most definitely will ‘cut my tongue out of my mouth’ if I reveal any more information, even 20-years later. Even this one post is risky, but the **truth** must be told!
(1)
Reply
(0)

SFC Robert Walton
6 mo
SPC Corbin Doades - It is all Military stuff some one just keeps relocating it.
(0)
Reply
(0)

MG Stephen Hogan
Posted 6 y ago
Firstly, Its a amorphous and fairly unpredictable sect where the great majority, if not all, of the informal leadership in the war-fighting company reside. It is also a very good litmus of the proper command environment; as if the SP4s see the wisdom in what the command is doing- even if it is embracing the suck++, then you'll go down range with studs and not duds. Finally, it is normally the origin of a great many volumes of staff paperwork, explaining how SP4 Smith managed to get the camel on top of the barracks and in a dress, and such the like. The most dangerous thing in the Army is a 2LT with a compass, but the second most dangerous thing in the Army is a SP4 with a plan.
(216)
Comment
(1)
show previous comments

SFC Robert Walton
6 mo
SPC Christopher Perrien - If a LT has a compass an SFC Messed up.
(1)
Reply
(0)

1SG James F Gallagher
6 mo
I worked with CSM that told me once that the most dangerous person in the world was a "Spec 4 with a high school diploma" !
(0)
Reply
(0)
Show More Comments
Read This Next
RallyPoint Home