Where is Trumpisthan; what is Trumpism and; where or who is the "Dark State " the former POTUS referred to?

CPT Gurinder (Gene) Rana
6.75K
586
214
34
34
0
The "Dark State" was an imaginary parallel Gov't that existed in the former President's mental state, which was true to him to coverup his early misadventures. Trump used this false narrative unsparingly to wave off any suspicion. It is a tactical move in business to waylay foe, yet it is less a political one because it is transparently clear on intent.

What did former President Trump have to lose by abiding by the procedures of Congressional Inquiry and answering questions under Oath before the House; why did Trump unduly influence the lopsided Senate into breaching its rules and deciding the case without hearing or cross-examination, and; why did the former POTUS refuse his staff from testifying before Congress and then, why did he threaten them with dire consequences, if they did testify; what was Trump trying to hide? Taking our heads out of the tunnel of false narratives, the intent and inference must be clear. If Trump had nothing to hide, why did he sack those who chose to testify at the House Hearings? Trump claimed in another false narrative that he was being cornered and harassed by Democrats without evidence and his staunch supporters embraced his narrative as the truth. Trump banks on such supporters to fund his reelection bid in 2024.

There are missing classified documents of National Security importance from the White House and Mulvaney recalls the former POTUS telling his staff that he was taking them out of the WH. Trump was averse to those who opposed him or his actions. Now, Trump was mute on the subject. The AG and Director of Home Affairs, after ensuring the documents were actually missing sought Court Orders to raid an ex-President's estate, as is the rule. The FBI raided Mar-a-Lago on orders from the Court. If Trump wants to blame anyone then, blame the Court, file a case against the Judiciary or question the FBI Director. Instead, Trump choae to spread another false narrative of the FBI overreaching authority and the Democrats on a witchhunt to mislead and misguide his supporters, again. What has the FBI done wrong by abiding by Court orders? Nothing at all, which makes this yet another false narrative.

LTC David Brown
Posted 4 mo ago
Democrats were planning to impeach Trump before he was sworn in. This is nothing new. Problem is Americans are developing a short tolerance for the nonsense. The DOJ had better deliver. Trump has gone through the Mueller investigation with false FISA warrants etc. Nothing burger based on a phony dossier. Two nothing burgers that didn’t move the needle much. New York AG launched a probe and closed it down. Now another New York DA is gonna get the SOB. Georgia has a case. Trump is probably the most investigated person in America and as Elton John would say “ he’s still standing”. So if the smolders along like the Mueller prob people won’t like it.
(45)
Comment
(1)
show previous comments

PO2 D Patrick Gleason
22 d
Trump has NOT been investigated nearly as much as Hillary Clinton. She was subjected to thirty years of gaslighting, name-calling, and investigations. And she SHOWED UP to testify whenever asked - eleven straight hours of grilling by those attempting to crucify her at one point. Could Trump stand up against such scrutiny? It seems we'll never know, because he's too much of a coward to take the stand.
(1)
Reply
(0)

SSgt Tom Neven
21 d
Almost everything you say is wrong. Both Mueller and the Senate Intel Committee documented that Russia interfered in 2016 with the intent to help Trump and that the Trump campaign was aware of it and welcomed it. The counterintelligence investigation of the Trump campaign predates the Steele dossier by months, so that had nothing to do with it. NY AG has not closed its investigation. And Trump is being investigated so much because he's corrupt to the core.
(2)
Reply
(0)

LTC David Brown
21 d
MSG Dale Fairbanks - You are simply WRONG. Attempt to impeach Trump started before he was sworn in. https://en.wikipedia.org/wiki/Efforts_to_impeach_Donald_Trump 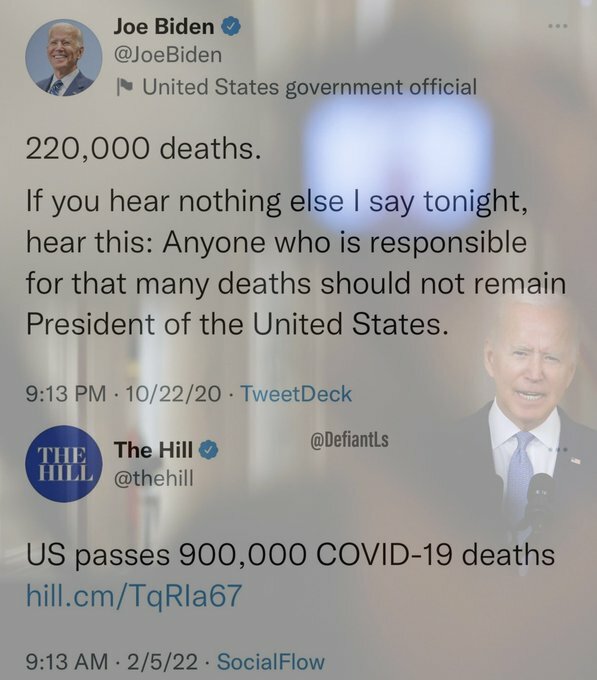 LTC Joe Anderson Warning: Will Reply Abrasively, Cuastically, Crassly
Edited 4 mo ago
Posted 4 mo ago
Unfortunately the Dark State / Deep State is real. Most people only point the finger at it when it's the opposite party's Deep State members who are responsible for an action, acting out, or exposed. Who are the Dark State / Deep State? It's/they're made up of those lifelong Senators, Congressmen, and the "Deep Pockets" behind them. They are the Senators and Congressmen who remain in power year after year after year, they stay in office their entire lives, and then their familie members pick up the reins and follow suit once they retire or are close to retiring. Most of them have never had a job other than politics. Professional politician, I don't care if they're Republican or Democrat are killing our country. We need to get rid of them. Unfortunately most people don't vote out incumbents. A good start would be to vote out the incumbents of both sides of the aisle and start with new members. But this won't happen. And as long as both parties keep these long-term Career Congressman and Senators is in power with deep pockets pushing their own agendas. The Dark and Deep States will never go away. Dark and Deep States politicians are not just Republican or Democrat. They are 100% on both sides of the aisle and only desire to make politics and power their career. When it comes right down to it we the people are responsible for the Dark and/or Deep State. As long as we keep voting them back in they will never go away. Infact their greatest and most successful lie has been convincing the American people/us they don't exist or only exist on one side of the aisle.
(38)
Comment
(0)
show previous comments

SFC Jim Freshour
19 d
Joe you hit the nail on the head however you didn't mention the unelected bureaucrats particularly SES level. These swamp dwellers make policies that affect all Americans. Think Fauci types and EPA regulations. The country is in desperate need of term and age limits for elected and unelected. Trump upset business as usual thus the move to destroy him. They will never let up not only to get him but as a lesson to any other America first politician to come.
(1)
Reply
(0)

LTC Joe Anderson Warning: Will Reply Abrasively, Cuastically, Crassly
19 d
SFC Jim Freshour We definitely have to many unelected bureaucrats making policy and decisions that they shouldn't be making. Decisions that affect the entire country. These Bureaucrats further their party's agenda when they are in power. When their party's out of powder they act as resistance hindering progress contrary to their party's agenda. Reagan tried to combat this when he first entered office by firing record number of bureaucrats and civil servants. They simply scurried to other Jobs with the DOD, Department of the Navy... before returning to their prior departments years later. The irony was, when he left office there were more Civil Service employees and bureaucrats than when he assumed office.
(0)
Reply
(0)

SFC Jim Freshour
18 d
Absolutely agree with your assessment of Pelosi. In my opinion she's far worse than Hillary.
(1)
Reply
(0)

MAJ (Join to see)
Posted 3 mo ago
I've never heard of "Trumpisthan," "Trumpism," or the "Dark State." Perhaps you mean the "Deep State" which is the entrenched bureaucracies of the government. An example of the Deep State is when the IRS targets politically conservative organizations for repeated audits, but does not look at the Black Lives Matter organization because it is politically leftist. The IRS agents are never held responsible for these misdeeds.

President Trump was investigated for three years by the FBI at the price of some 40 million dollars, but not found to have committed any crime. Considering the unlimited resources of the FBI, it is notable that they could not find any illegal activity of any kind. In fact, that investigation was initiated by the falsified "Steele Dossier" which humiliated the FBI because the whole thing was a sham.

President Trump has repeatedly called for all of the documents of these "investigations" to be released to the public, but it is the Deep State bureaucrats who refuse to release the information because they know that it would show the Deep State corruption. Presidents Clinton, Bush, and Obama have all taken classified documents from the White House. Where are the investigations into them?

In truth, President Trump's America First policy improved America's economy, as well as its standing in the world. Communist propaganda works to stop that by painting everything he did in a bad light.

Your "in-depth analysis" appears to be little more than communist propaganda, intended to make people hate America, just like the Critical Race Theory propaganda. It uses nebulous references and skewed facts to make uninformed people react negatively to President Trump promoting America and defending himself from these false accusations. Proof of that is your reference to the "Director of Home Affairs" which doesn't exist in America. We can conclude that your are conducting a psyop to influence the US military to hate America.
(25)
Comment
(0)
show previous comments

CPL T.A. Nelson
26 d
Much of what the CPT said is true but the Deep State is obvious when so many vote against positive things that effect everyone who does not hold the wealth that would allow circumventing the laws. It includes every branch of government and will likely never be rooted out...
(1)
Reply
(0)

CPL T.A. Nelson
26 d
MSgt Robert "Rock" Aldi I am an fierce independent because of those whom have been working behind the scenes to screw over average Americans. Your point was what caused me to comment. I think officers seem to miss the small things that would otherwise be noticed by those with boots on the ground; in military service and civilian politics...
(1)
Reply
(0)

SSgt Tom Neven
21 d
The counterintelligence investigation of Trump predated the Steele dossier by months. The investigations were not a sham. Both Mueller and the Senate Intel Committee document in great detail how Russia interfered in 2016 to benefit Trump and how the Trump campaign was neck-deep in Russian contacts. A simple Google search will verify that.

And sorry, no, no other presidents have taken classified documents and hidden them in their personal residences. That is simply a lie. Stop drinking the Kool Aid.
(0)
Reply
(0)
Show More Comments
Read This Next
RallyPoint Home