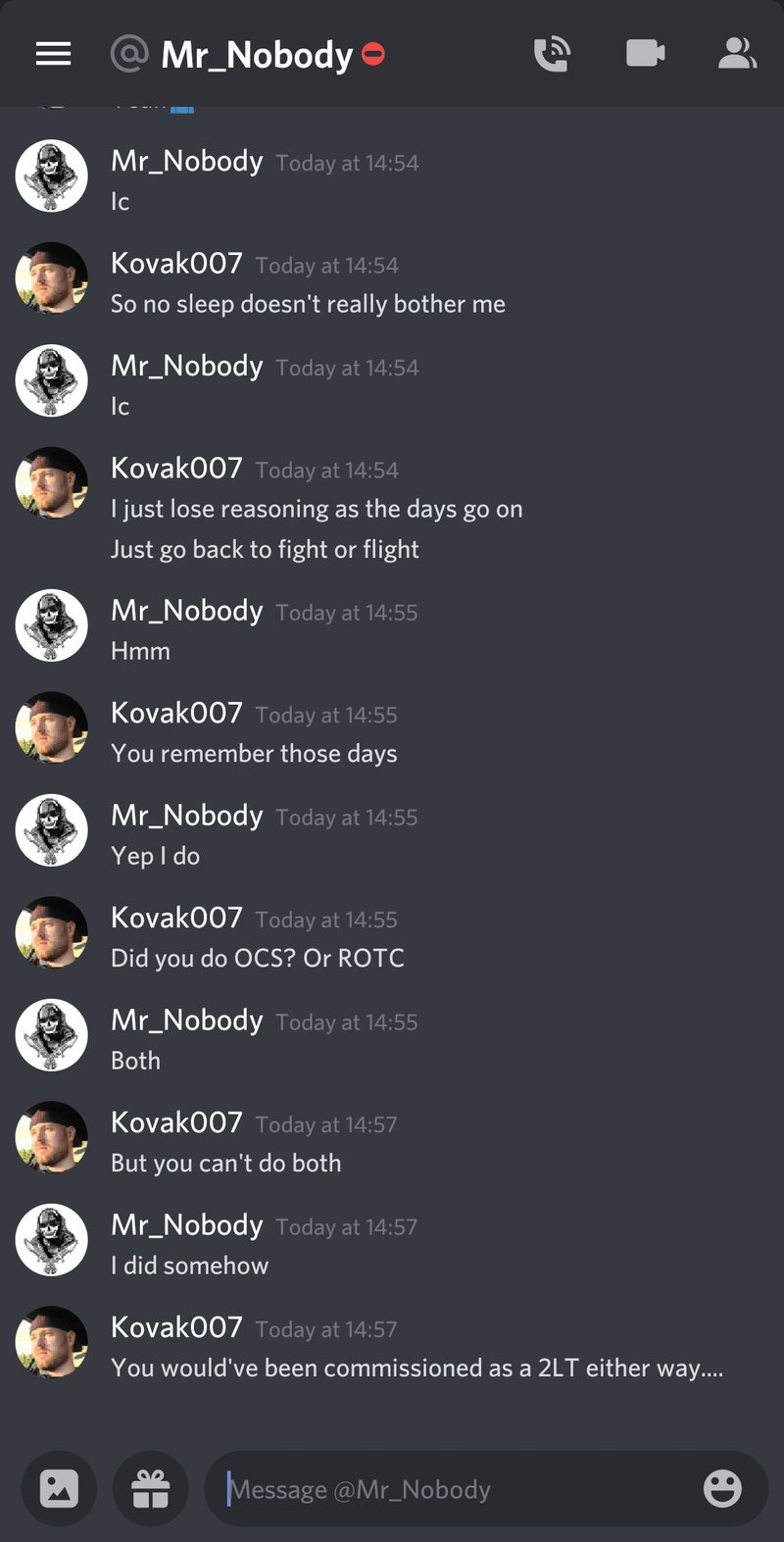 Ok, so this might be a bit cliche. And I need some help with this because I despise stolen Valor. This guy is saying he went to both OCS and ROTC. He is saying he was an O3. Is this even possible?
Posted in these groups:

LTC Jason Mackay
Edited 1 mo ago
Posted 1 mo ago
Possible? Yes. Went to HS with a guy who enlisted, did ROTC green to gold, left college, reenlisted and then eventually earned an OCS slot. Retired as an O4.

The fact that your post is about Mr_Nobody leads me to think he is a troll or BSer. Possible, not probable. He is also being incredibly cryptic in the responses. The person pressing him doesn't have the experience / knowledge to press the right questions.
(7)
Comment
(0)

PVT Robert McCuistion
1 mo
Sir, that would be me pressing him. What should I ask to get him to open up?
(0)
Reply
(0)

LTC Jason Mackay
1 mo
PVT Robert McCuistion - is it really that critical to yell gotcha! Over this shitbird? Their short cryptic responses indicate to me they are FOS.

When you say ROTC in the post, are they thinking JROTC? Most do not understand the difference.

If this is a moral imperative, I would ask:
- wow both, that is interesting. How did you do that? (They'd have to have left one or the other and pursued the other...unless they are a direct commission doctor, Chaplain, or lawyer) let them pay out their own rope.
- When did you contract for ROTC? (No contract = no commission)
- where and when did you do Advanced Camp? (If you didn't do Camp, you didn't commission through ROTC. 100% of those commissioning through ROTC do Camp at the end of their Jr or Sr year) You could also ask them which cycle they went through. I went through 7th cycle at Ft Bragg 1992. Anyone commissioning from the late 70s onward would have this experience.
- which college did you attend? When did you graduate? (There was a time you only needed 60 credits for OCS and you had to do degree completion. If he "retired" as a CPT and wasn't medically retired he'd have to have a bachelor's degree to comply with federal law. he'd also likely need 10 years enlisted and 10 years Commissioned. That's the only way I could make that math come out, otherwise he'd retire at his highest enlisted grade or would have been promoted to O4)
- when did you commission? Which branch?
- what year group were you? (This should be the year they commissioned)
- Which OCS Class were you in?
- Where did you do OCS? This is tricky. If they are Vietnam era, each branch ran their own OCS. So OCS may have been in Benning, Knox, Aberdeen, etc. again pay out the line and see what they tell you. Also, states run their own OCS for the ARNG.

which branch is this person? My list above really applies to the Army. Navy and USAF also have ROTC. USAF has OTS vice OCS.
(2)
Reply
(0)

MAJ (Join to see)
Posted 1 mo ago
There were some folks in my OCS class who had either quit or failed out of West Point, ROTC, and The Citadel. I’m sure they all made O3...
(7)
Comment
(0)

MAJ (Join to see)
Posted 1 mo ago
I guess he could have gone to ROTC and dropped before getting his commission. Then enlisted and later went to OCS. While I haven't heard about it I saw two people in my ROTC refuse their commissions and go enlisted due to their contract.
(7)
Comment
(0)

PVT Robert McCuistion
1 mo
Appreciated sir, I just wanted to verify. I'm not one to shy away from calling someone out.
(2)
Reply
(0)
Show More Comments
Read This Next
RallyPoint Home