"Weimar Republic
The Weimar Republic was Germany’s government from 1919 to 1933, the period after World War I until the rise of Nazi Germany. It was named after the town of Weimar where Germany’s new government was formed by a national assembly after Kaiser Wilhelm II abdicated. From its uncertain beginnings to a brief season of success and then a devastating depression, the Weimar Republic experienced enough chaos to position Germany for the rise of Adolf Hitler and the Nazi Party.

Germany After World War I
Germany didn’t fare well after World War I, as it was thrown into troubling economic and social disorder. After a series of mutinies by German sailors and soldiers, Kaiser Wilhelm II lost the support of his military and the German people, and he was forced to abdicate on November 9, 1918.

In December 1918, elections were held for a National Assembly tasked with creating a new parliamentary constitution. On February 6, 1919, the National Assembly met in the town of Weimar and formed the Weimar Coalition. They also elected SDP leader Friedrich Ebert as President of the Weimar Republic.

On June 28, the Treaty of Versailles was signed, which ordered Germany to reduce its military, take responsibility for the World War I, relinquish some of its territory and pay exorbitant reparations to the Allies. It also prevented Germany from joining the League of Nations at that time.

The Weimar Constitution included these highlights:

Hyperinflation and the Fallout
Despite its new constitution, the Weimar Republic faced one of Germany’s greatest economic challenges: hyperinflation. Thanks to the Treaty of Versailles, Germany’s ability to produce revenue-generating coal and iron ore decreased. As war debts and reparations drained its coffers, the German government was unable to pay its debts.

Some of the former World War I Allies didn’t buy Germany’s claim that it couldn’t afford to pay. In a blatant League of Nations breach, French and Belgian troops occupied Germany’s main industrial area, the Ruhr, determined to get their reparation payments.

The Weimar government ordered German workers to passively resist the occupation and go on strike, shutting down the coal mines and iron factories. As a result, Germany’s economy quickly tanked.

In response, the Weimar government simply printed more money. The effort backfired, however, and further devalued the German Mark—and inflation increased at an astounding level. The cost of living rose rapidly and many people lost all they had.

According to Paper Money, written by George J. W. Goodman under the pseudonym Adam Smith, “the law-abiding country crumbled into petty thievery.” An underground bartering economy was established to help people meet their basic needs.

Dawes Plan
Germany elected Gustav Stresemann as their new chancellor in 1923. He ordered Ruhr workers back to the factories and replaced the Mark with a new currency, the American-backed Retenmark.

In late 1923, the League of Nations asked U.S. banker and Director of the Budget, Charles Dawes, to help tackle Germany’s reparations and hyperinflation issues. He submitted the “Dawes Plan” which outlined a plan for Germany to pay more reasonable reparations on a sliding scale. Dawes was later awarded the Nobel Peace Prize for his efforts.

The Dawes Plan and Stresemann’s leadership helped stabilize the Weimar Republic and energize its economy. In addition, Germany repaired relations with France and Belgium and was finally allowed into the League of Nations, which opened the door for international trade. In general, life improved in the Weimar Republic.

Great Depression
Much of the Weimar Republic’s recovery was due to a steady flow of American dollars into its economy. But unbeknownst to Germany, America had positioned itself for an economic disaster of its own as it struggled with increased unemployment, low wages, declining stock values and massive, unliquidated bank loans.

On October 29, 1929, the U.S. stock market crashed, sending America into a devastating economic meltdown and ushering in the Great Depression.

The stock market crash had a global ripple effect. It was especially devastating for the newly recovered Weimar Republic. As the flow of American money dried up, Germany could no longer meet their financial responsibilities. Businesses failed, unemployment plummeted again, and Germany faced another devastating economic crisis.

Article 48
During hyperinflation, the German middle class bore the brunt of the economic chaos. When another financial crisis hit, they grew weary and distrustful of their government leaders. Searching for new leadership and fearing a Communist takeover, many people turned to extremist parties such as the Nazi Party led by Adolf Hitler, despite his unpopular and failed attempt to start a national revolution in 1923.

In 1932, the Nazi Party became the largest political party in Parliament. After a brief struggle for power, Hitler was named Chancellor in January 1933. Within weeks, he invoked Article 48 of the Weimar Constitution to quash many civil rights and suppress members of the Communist party.

In March 1933, Hitler introduced the Enabling Act to allow him to pass laws without the approval of Germany’s Parliament or President. To make sure the Enabling Act was passed, Hitler forcibly prevented Communist Parliament members from voting. Once it became law, Hitler was free to legislate as he saw fit and establish his dictatorship without any checks and balances." 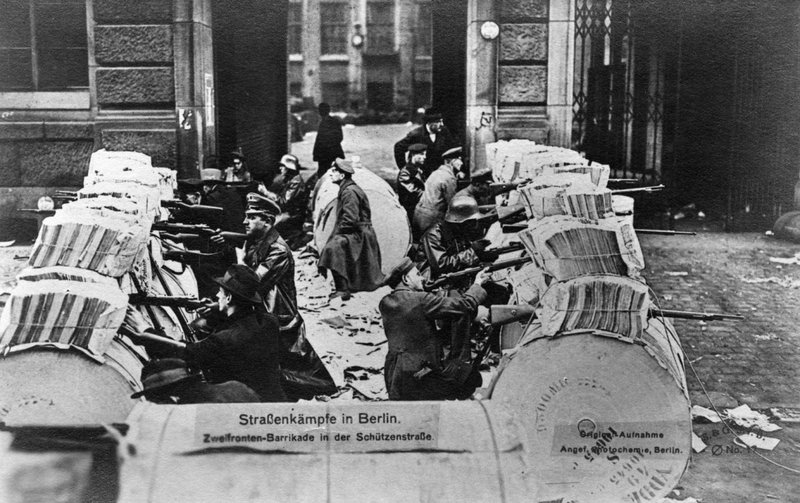