Iraq's Prime Minister Haider al-Abadi announced the airstrikes in a statement, saying the air force hit the border towns of Boukamal and Husseibah, strikes that came in response to recent bombings in Baghdad claimed by IS and linked to the militants' operations in Syria.

Meanwhile, Iraqi forces pushed into the first neighborhood of western Mosul and took full control of Mosul's international airport and a sprawling military base on the southwestern edge of the city, according to Iraqi officials.

Iraqi federal police fired volleys of mortars into Mosul from the edge of the airport, which appeared almost completely destroyed: runways had been dug up, control towers flattened and concrete barriers overturned.

The territorial gains marked the first key moves in the battle, now in its sixth day, to rout IS militants from the western half of Mosul, Iraq's second-largest city.

The push into the Mamun neighborhood was followed by intense clashes with IS militants, according to an Iraqi special forces officer on the ground, who spoke on condition of anonymity in line with regulations.

U.S. changes rules of engagement for Mosul fight in Iraq
Similarly intense counterattacks followed pushes on the other fronts. Federal police Maj. Gen. Haider al-Maturi said his forces pushed through concrete roadblocks and earthen berms set up by the Islamic State group to impede their progress, and succeeded in capturing around 30 percent of the Aviation District, the first district entering Mosul's western perimeter from the south.

"There were fierce clashes. We faced car bombs, suicide attackers and mortar shelling," al-Maturi said. "The battle ahead will be difficult and complicated because of the civilians around. It'll be street fights."

Al-Maturi said six Iraqi troops were wounded, including two officers. However, an Associated Press team near the front line saw at least four wounded special forces' members and the bodies of three soldiers, suggesting more intense fighting than the previous day. A Canadian medic volunteering at a front-line clinic said he had treated at least 10 wounded federal policemen. Iraq's military does not release official casualty figures.

Maj. Gen. Thamer Mohammed, commander of the rapid response unit of the Iraqi federal police, said 65 IS fighters were killed in the battle at the airport.

Earlier on Friday, the spokesman of the Joint Military Operation Command, Brig. Gen. Yahya Rasool, said Iraqi forces had also retaken the military base adjacent to the airport.

An Iraqi air force commander said the airstrikes against IS inside Syria were carried out with F-16 warplanes at dawn and "were successful." The commander, who spoke on condition of anonymity because he was not authorized to talk to the media, said they were conducted at the order of the prime minister.

Dunford: 'Full range of options' on table in ISIS review
The advances came a day after special forces joined the fight for western Mosul.

Both the Ghazlani military base and the airport will be key to the next steps in the daunting battle and will serve as a base of operations as Iraqi forces launch subsequent pushes into western Mosul, which is divided by the Tigris River into two halves.

Iraqi authorities declared the city's eastern half "fully liberated" from the Sunni militants in January, three months after launching the operation to take back Mosul.

On Thursday, Iraqi special forces joined federal police and rapid response units in the push, while the Popular Mobilization Forces — an umbrella group of government-sanctioned Shiite militias — secured the main roads west of Mosul, largely cutting the city off from IS-held territory in Syria.

The United Nations estimate that about 750,000 civilians are trapped in western Mosul. The initial numbers of displaced from western Mosul have been low, but Iraqi forces are yet to punch into the city's dense urban neighborhoods.

The battle for western Mosul is expected to be the most difficult yet because the sector is denser, with older neighborhoods and narrower streets that will likely complicate the already difficult urban combat ahead. 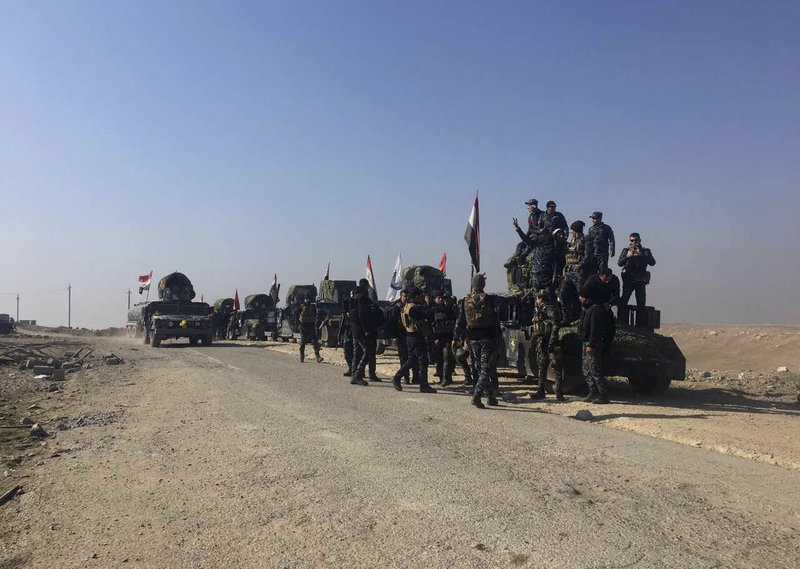 LTC Stephen F.
Posted 3 y ago
That seems like good news that Iraqi Air Force assets engaged ISIS in Syria for the first time SFC Joe S. Davis Jr., MSM, DSL the coordination for this operation must have been exacting to ensure no friendly aircraft were mistakenly engaged and no friendly forces were engaged.
(0)
Comment
(0)
Read This Next
RallyPoint Home