The more obvious reasons Hillary Clinton lost the presidency seem clear. Let’s start with those before getting to the offbeat ones.

She lost because of:

A previously undetected shift (by pollsters anyway) in the white working class in traditionally Democratic rust belt states with economic angst. That included working class white women, who minimized the gender gap (the so-called “Waitress Moms.”) They were apparently more worried about their pocketbooks than about what Donald Trump said to an entertainment television host a decade ago.

The fact that Trump outperformed Mitt Romney’s performance with Hispanics and (slightly) African-Americans, in exit polls at least.

The fact that she didn’t excite millennials as Barack Obama had (Trump’s percentage with them matched Romney’s in exit polls, so maybe they were still Feeling the Bern and went third party).

The fact that she was a flawed nominee (as was he), whose unfavorable ratings were consistently so high. In the end, voters didn’t really like either one of them, so the personality and character part of it was a wash.

The fact there was anti-establishment fever when she represented a political dynasty,

Trump won 279 electoral votes to Clinton’s 218, although she won the popular vote, and the margins in the states where he scored stunning upsets were very close in Florida, Wisconsin, Michigan, Pennsylvania. Still the last three are states that haven’t voted for a Republican for president since the 1980s.


1. Not Having a Memorable Slogan

Whatever you think of him, you have to agree: Trump is a genius marketer.

The slogan is simple. It’s memorable. It’s a promise to voters. It’s something they want. It even became a hashtag at the end. #MAGA. Her slogan didn’t become a hashtag (it also speaks to an enthusiasm gap. As with Obama’s voters, Trump’s saw themselves as part of a movement.)

MAGA was endlessly repeated. (Like Hope and Change). Come to think of it, they’re the same slogans, just packaged differently (one’s a little more pessimistic, but they both promise something different, whereas Hillary represented the dynastic past.) There was also #DrainTheSwamp.

No one really knows how the candidate will accomplish the promise, and they don’t know what it means really, but it doesn’t matter at the time. It makes them feel good (and there’s economic malaise behind it). Ronald Reagan was a genius at this; he captured the country’s optimism, and its desire for a shining city on a hill.

Trump’s promise was concrete. He would bring that back.

Can you remember Hillary Clinton’s slogan? Whatever it was, no one was putting it on a hat. (Although I think I saw it once emblazoned on her airplane.)


It’s a good thing that Hillary wasn’t trolling beauty queens at 3 a.m. or retweeting comments about other candidates’ wives looks. However, she used social media in a conventional way, and he used it to:

2) Create an aura of authenticity with voters by speaking directly to them outside the media filter.

Her entire campaign was based on old media and conventional tactics. Trump had an entire conversation with millions of people outside the media filter. He earned millions in “free media” by baiting the media to talk about him.

His candidacy probably would not have worked in a non-social media age because the media definition of him would have remained unchallenged. There were two conversations going on during this campaign; the one the beltway media was having on people’s TV screens, and the one he was having directly with voters.

It actually sounded like Trump was really writing his own tweets. We should add a few exclamation points to really mimic his style!!

The media reacted to Trump, as much as he reacted to them. He set the conversation. He drove the news cycle, day in and day out.

Trump embraced the philosophy that it was better to be talked about negatively and constantly than to be ignored. Define yourself first. In contrast, Clinton sometimes seemed encased in a protective bubble. Ever watch the Showtime Series The Circus about the presidential campaign season? They barely seemed to get close to her, whereas other candidates were more accessible – and, thus, seemed more human and less “elite.” Of course, Trump’s tweeting also had a downside, but his aides wrestled it away from him at just the right moment.


Forget James Comey. On October 24, the federal government informed Americans all over the country that they would be socked with double-digit Obamacare premium increases. Something like 2 percent of the State of Minnesota was facing the big premiums without extra help from the federal government.

True, some (if not most) will find those premiums offset by subsidies and tax credits. But not all. And that didn’t stop the headlines. Typical headline: “Obamacare Premiums to Soar 22%.”

Negative news headlines trumpeted the increases in various battleground states while the media were talking about other things (like Clinton’s emails and Trump’s groping, things that didn’t directly affect people’s own lives).

Let’s consider the surprise states that Trump won (or almost won), in the rust belt, and then list their Obamacare premium increase:

This was a bigger local news story than it was a national one. Trade was a big deal too. Her comment on hemispheric open borders was maybe the most damaging thing to come out of WikiLeaks, even though she tried to claim she was talking about energy.

The riots and unrest in American cities – Charlotte, Baltimore, and so forth – created a sense of disorder in an already disordered world. American cities burning on TV. Police shootings. ISIS terrorists beheading people on the Internet. The Syrian chaos. The terrorist attacks throughout the world. These things have very different roots, and they aren’t comparable. Except for one way: They generated scenes of disorder that flooded people’s TV screens. They impact people’s sense of security.

It all adds up to a general sense of disorder that frightened people toward a strongman. In times of disorder, people turn to an alpha.


5. She’s Too Similar to Obama

That’s not meant to cast aspersions toward the president. It’s just an observation that voters often choose a president’s polar opposite.

The Washington Post reported that, if Clinton had won, one party would have been elected three times in a row – “something that has happened only once since the middle of the 20th century.”

The incremental, intellectual Obama was a reaction to the brash and visceral George W. Bush.

The proper, traditional George W. Bush was a reaction to the libidinous Bill Clinton.

Ronald Reagan was a reaction to Jimmy Carter.

Bill Clinton was a reaction to George H.W. Bush.

Go back and watch the debate in which Trump toted Bill Clinton’s accusers along. Clinton seemed rattled. After that, she avoided opportunities to go after Trump on the groping allegations as much as one might expect (although the media did it for her).

Trump managed to neutralize Bill, and Bill helped neutralize Trump’s own problems. However, it’s probable that a lot of Americans were not terribly surprised to learn Trump talks like that. Who really thought Trump didn’t talk like that? All of the character issues ended up a wash.

The other problem with Bill is that he reminds people of the past.

You have to wonder why Julian Assange and WikiLeaks had it so in for Clinton. However, the endless dump of emails, from the Democratic National Committee and then Clinton’s campaign chairman, were damaging.

They didn’t deliver an outright smoking gun. However, they did provide an endless series of distractions and questions, and they contributed to perceptions of Clinton as an elite, raking in cash from corporate interests.

debate memes
The Russians did come up a lot in the debate. (Twitter)


8. She Was Part of the ‘Establishment’


How could everyone have missed this? Anti-establishment fever was the prevailing point of the primaries: Bernie Sanders, not just Donald Trump. Clinton’s Goldman Sachs speeches and resume were just the start of it. She was the establishment in an anti-establishment year. She couldn’t rail against Washington or Obama. She’s part of it all.

So what were they thinking when they had her appear with a bunch of celebrities at the end?

Donald Trump didn’t have to appear with a series of celebrities at the end. He was the celebrity. And we live in a celebrity-driven country. Clinton is a political figure. But somehow he became the hero of blue collar working class folk, while she lost the working class.

The masses were familiar with Trump from The Apprentice. Everyone knows this, but don’t underestimate it. His tough, no-nonsense, common sense style in the boardroom – faked or not – left a lasting impact. It was a lot harder for political opponents and some in the media to define him because he was already defined in people’s imaginations.

The billionaire managed to become the anti-elite. Go figure.


9. The Big Media Liked Her

Trump understands that it can help a politician to have a foil. Every time the media attacked him, it built him. Why?

There’s great public dislike of the media in general, but the public probably still likes its local reporters. The beltway media came to symbolize the “elite.” When Trump was attacked by the “elite media” and wasn’t destroyed by it, it built him. You know the adage about shooting at the king… “If you’re going to shoot the king, don’t miss.” If you miss, it makes him look stronger because he took on powerful forces.

When the media praised Clinton, it made voters feel all the more that she was part of an inside club they don’t have access to (this was reinforced by developments like the Goldman Sachs speeches).

He’s the Republican senator from Wisconsin who prevailed in a hotly contested Senate race in that state on Tuesday night against a former incumbent, Russ Feingold.

Wisconsin has 10 electoral votes. Trump won the state by 1%. Trump needed 270 electoral votes. He has 279. Because Johnson was a hotly contested Senate seat that was believed to be the key to maintaining Republican control of the Senate, the big money flooded in at the last minute. A November 1 story on Politico was headlined, “Money Pours Into Wisconsin Senate Race.” The AP said millions of dollars poured into Wisconsin in the final week of the campaign. The final week.

Without Johnson being viable, without control of the U.S. Senate at stake, the get-out-the-vote efforts and flurry of big money outside advertising would not have occurred to that degree. Many of the ads tied Clinton and Feingold together. This was a machine that was practiced and honed by the Scott Walker recall and victories.

Of course, you could argue that Trump’s coattails pulled Johnson through, not the other way around. What came first, the chicken or the egg? 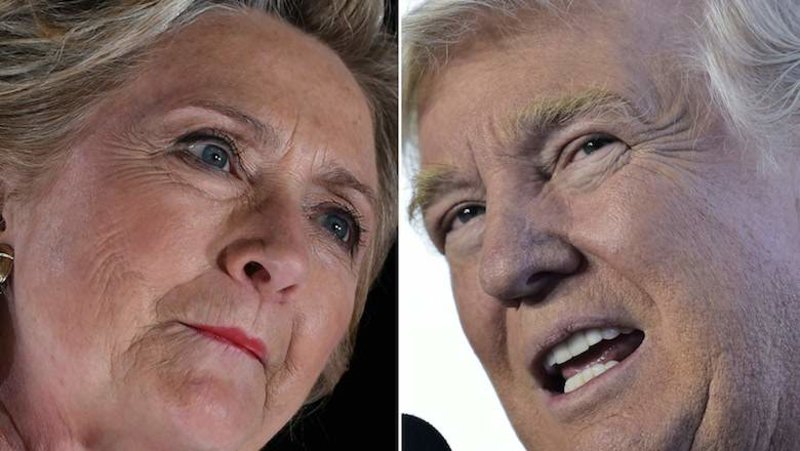 Posted from heavy.com
Posted in these groups:

SFC George Smith
Posted 5 y ago
she is a Career Criminal Political Prostitute and a Pathological Liar...
(4)
Comment
(0)

MAJ (Join to see)
Edited >1 y ago
Posted >1 y ago
In their debates he spent half the time attacking her. It portended more to come. Attack the enemy caustically and portray himself in flattering terms beyond any modicum of his leadership abilities. We elected a poser. He has brought a lot of chaos to the country.
(1)
Comment
(0)
Show More Comments
Read This Next
RallyPoint Home