Aria DiMezzo laid a trap for Republican voters in Cheshire County, and they walked right into it.

KEENE, N.H. – The first thing Aria DiMezzo wants to make clear about the giant phallic hieroglyph that someone spray-painted on the side of her car on Saturday night — along with a homophobic slur — was that it was poorly drawn.

The second thing she wants to make clear about the graffiti, which appeared just hours after FoxNews.com ran a story about DiMezzo headlined “ ‘Transsexual Satanist anarchist’ wins GOP nomination for sheriff in NH county,” is that she thought it was hilarious.

“It’s not a hate crime,” DiMezzo said with a smirk. “It’s a gender reveal!”

She is clearly enjoying this very chaotic moment she has created in New Hampshire politics, one that has left DiMezzo — who campaigned on a platform of “F the Police” and does indeed identify as a transsexual Satanist anarchist — as the Republican nominee for sheriff in Cheshire County, in the southwest corner of the state.

“A lot of people are telling me I need to take this more seriously,” she said as she sat on a friend’s porch on a recent day, anxiously chain-smoking Newports. “If I had taken it more seriously, I wouldn’t have won the nomination. Leave the trolling to the pros.”

And what a troll job it has been.

DiMezzo, who is a Libertarian, said she was unable to get on the ballot for her party, so instead she registered as a Republican for the primary. She did it mostly to be a pest, but she was also wondering if she might lure voters into a trap that would prove a point about a problem with our political system — namely, that people will blindly vote for any candidate on their party’s ticket.

“I ran unopposed, but if people were paying attention, I should have gotten 25 votes and lost to a write-in candidate,” said DiMezzo.

Instead, she received more than 4,000 votes.

Many of those voters are now rather mad, lashing out at DiMezzo online, though it would be hard for them to claim that she duped them by simply hiding herself and her beliefs.

Since moving to Keene from Mississippi two years ago, drawn by a loose collective of Libertarian activists known as Free Keene, DiMezzo has been hard to miss. She ran for sheriff as a Libertarian two years ago, and for City Council last year with a platform to legalize magic mushrooms and “Eat the rich.”

And for this year’s campaign for sheriff, her lawn signs clearly feature the anarchist symbol of an “A” inside a circle, as well as the phrase “F the Police.” (Her campaign website is effpolice.com.)

“Plus I’m a 6-foot-tall tranny with bright red hair and tattoos who drives around town in a red convertible,” she said. “I’m very hard to forget.”

She said she has avoided the temptation to read the 14,000-plus comments on the FoxNews story — “I don’t hate myself enough to do that” — but that the reaction in Keene, a college town that leans left, has been mostly positive.

As she was being interviewed on the porch, a man who was walking down the street with a young boy did a double-take when he spotted her, then shouted out “You’re a star!”

For those who are unhappy to discover that they voted for a troll, she said they have only themselves to blame. “This is the consequence of your actions,” she said. “I gave you the rope and you hung yourself. Four thousand people put me into the highest law enforcement position in the county without knowing a thing about me, which is ultimately an argument for anarchism.”

Marilyn Huston, the Cheshire County GOP chair, did not respond to a call seeking comment. But in an article in the NH Journal, Huston was quoted as saying DiMezzo “does not fall in with the Republican message" during an interview where Huston reportedly referred to DiMezzo as “he” repeatedly.

DiMezzo shrugs her shoulders at all such things. “A trans person should be able to run for office without ruffling feathers, but whatever,” she said.

Now that she’s won the nomination, DiMezzo insists that this is more than just a stunt, that she does, in fact, want the job, and is planning to actively campaign against the incumbent sheriff, Democrat Eli Rivera, who is seeking a fifth term in November.

“I don’t expect to win. And if I do, I suspect that the deputies will quit as soon as I’m sworn in,” she said. “If not, I’m going to give them three options. You can stay at the station and play Xbox. You can go out and police the police. Or you can go home.”

As for the giant, poorly-drawn penis — a tire was also slashed, along with the soft-top on her convertible — DiMezzo said she has no desire to figure out who did it. Several people have raised the possibility that she did it herself, which she brushed aside; she suspects it was some teenagers, acting out some role they think they’re supposed to play.

It made her laugh, yes, but it also caused her to make a big change to her wardrobe: She now goes everywhere with a handgun clearly strapped to her hip.

What she didn’t do was call the police. 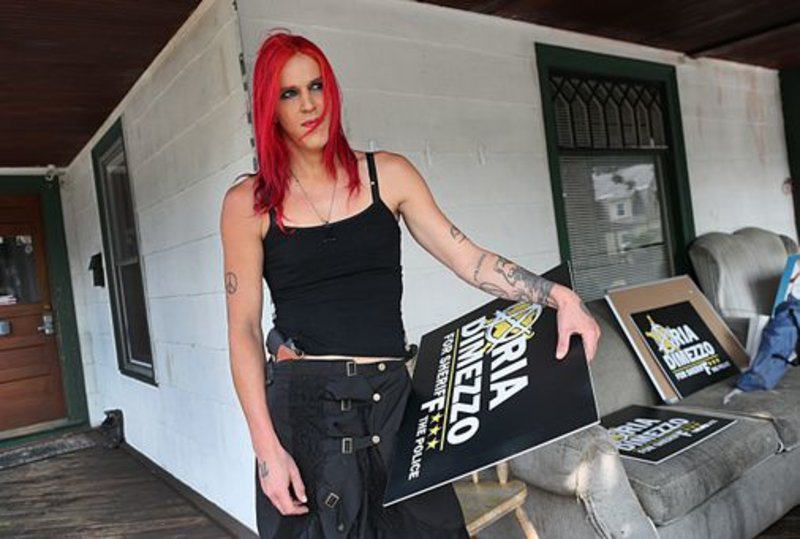 Posted from bostonglobe.com
Posted in these groups:

MAJ James Woods
Posted >1 y ago
Hilarious! Point well made. The Libertarians didn’t want her and the Republicans blindly voted for her. Whoops. November elections will be no differently. Millions will vote out of blind loyalty to party without knowing what the candidate represents. Oh well.
(3)
Comment
(0) 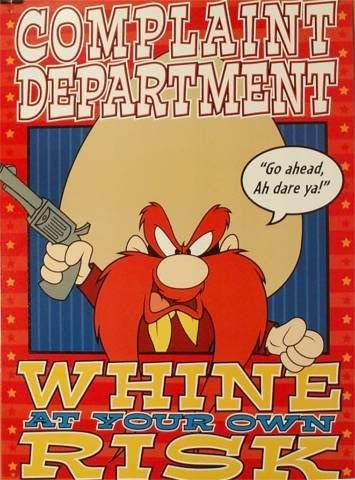