The damage to the ship from the days-long fire, that at times reached 1,000 degrees, was too much to repair for a ship that had already been in service for almost a quarter of a century, according to the Navy.


"After thorough consideration, the secretary of the Navy and the chief of naval operations have decided to decommission the Bonhomme Richard due to the extensive damage sustained during that July fire," Rear Adm. Eric H. Ver Hage, commander of the Navy Regional Maintenance Center, told reporters on an audio-only news conference Monday.


Ver Hage said the Navy had explored three possibilities that included scrapping the ship, repairing it or re-configuring it into a hospital ship or tender.

In the end, those costs appeared to be just as expensive -- and would take as long -- as a future purchase of a new modern amphibious assault ship.

Scrapping the ship will cost $30 million over a nine- to 12-month timeline instead of a possible $2.5 -$3.2 billion renovation cost that could take as long as five to seven years.

Replacing the amphibious assault ship with a new America-class ship capable of launching F-35 Joint Strike Fighters would cost $4.1 billion and take five to six years. There was no indication that purchasing a replacement ship was under consideration.

"We've got a number of LHAs being built right now, and so, you know, we think we're in the right spot with regard to LHA construction for the time being," said Capt. Stephen Murray, major program manager for surface ship readiness and sustainment.

The decommissioning process has already begun, with parts that can be used on other Navy ships being salvaged. The ship's crew will be assigned to other positions within the Navy.


The Bonhomme Richard was pierside in San Diego undergoing renovations on July 12 when a fire began in a storage area above where Marine Corps vehicles were usually stored on the large amphibious assault ship.

The fire quickly spread through the ship's main hangar and consumed large areas of the ship's interior. On the flight deck, one of the ship's two masts collapsed from the intensity of the flames.


The blaze raged for five days before firefighters were finally able to extinguish the flames leaving significant metal areas of the ship's interior in melted pieces.


Since the fire, the Navy conducted engineering reviews to determine whether it made sense to go through a costly renovation of the ship that was commissioned in 1998 at a cost of $750 million. Adjusted for inflation, the ship's cost in 2020 dollars would have been $1.2 billion.

In late August, defense officials confirmed to ABC News that they were investigating the possibility of arson and questioning a Navy sailor. On Monday, officials declined to comment on their ongoing investigation.

In late July, the Navy's top admiral questioned whether it made sense to repair the ship after having seen firsthand all of the damage.

"I am 100% confident that our defense industry can put this ship back to sea," said Adm. Mike Gilday, the chief of naval operations. "But, having said that, the question is: Should we make that investment in a 22-year-old ship? And I'm not going to make any predictions until we take a look at all the facts and we follow the facts and we can make reasonable recommendations up the chain of command on the future steps, any repair efforts, future repair efforts of Bonhomme Richard." 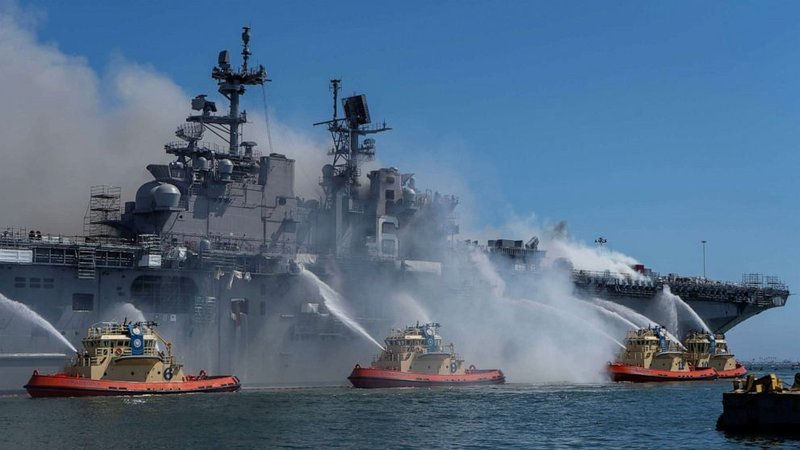 PO1 John Johnson
Posted 10 mo ago
Had an inkling that this would be the result; after seeing the fire damage once they could get inside, I thought there would be too much molecular fire damage done to the steel in too large an area to bring it back into service.
(1)
Comment
(0)