Paul Towsley's answer to Did you ever end up benefiting, in some way, from a crime that you were...

A1C (Join to see)
472
11
7
4
4
0
I thought you might enjoy a late night writing purge about Bikers, Crime, Drugs and local legends, Its not Shawshank redemption, but its all true. Some cool photos as well. Local Portland Biker history.

Paul Towsley's answer to Did you ever end up benefiting, in some way, from a crime that you were...

Posted from quora.com
Posted in these groups:

A1C (Join to see)
3 mo
There is more, a LOT more, everyone locally has a Sandy Bandit story or 5. Here is a favorite of mine from the Leather Mormon Dave Hansen. Dave is just as quirky and eccentric as Cliff and they both liked to go to the Sandy Barr Flea market and so one very early morning (To get the good stuff) around 5am Dave picks up Cliff and off they go. Nearly there Cliff starts yelling STOP the car! Dave freaks out thinking something is dreadfully wrong. Cliff then leans out the open passenger door and barks orders to back up, turn right/left then again STOP! He gets out and there is freshly harvested ears of corn laying in the roadway spilled from a farmers truck. Cliff tosses them in the backseat and exclaims "I will use them for soup and cornbread tonight!" Now, Cliff is worth Millions of dollars, but growing up in the depression,,, no way do you let food go to waste. Askme nice and I will tell about the hidden stashes of gold. Here is the cycle world article. https://www.cycleworld.com/2015/07/30/mining-for-old-the-greatest-cache-of-vintage-motorcycle-parts-in-the-world/

LTC Wayne Brandon
Posted 3 mo ago
A good story and well documented. Oddly enough, I don't recall having ever heard of this high profile personality. Thanks for sharing it, A1C Towsley.
(2)
Comment
(0) 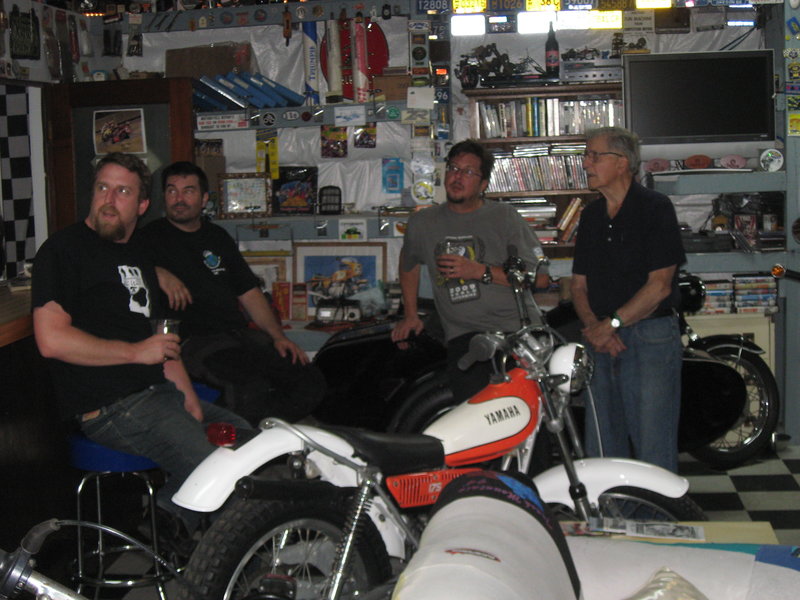 Thanks! He has been covered many times in the Motorcycling press, And he used to sponsor and run local races so at one time, a whos-who of champions raced here on his track. Dick Mann, Dusty Coppage, Gary Nixon, Gene Romero,, you name it.
But the real story was him buying out TriCor, NVT, BSA Corp, and the other British exporters US warehouses and distr. centers. He had shipping containers of new bikes, new frames, new engines etc. Worth MILLIONS! $$$$$$$$$ So see the link to the cycle world article.
Here is MY connection. I documented it and spent days down there when it all sold. Mike Riley would snidely say " You with that damned camera always taking pictures!" Well for 2 years I documented the largest parts haul of NOS stuff in the world and every day posted about it online on several Motorcycle forums. Carl Best, Known as Carlo on several forums X-Posted to the Cycle world forum my work. Cycle world took my material and ran with it. I contacted them while here in Portland was basically told to F**K -Myself. So,, a Beer, clap on the back and some sort of recognition I documented it all,, Eh well, they were CYCLE F**King WORLD and who the hell am I??? Karma??? Well, im not famous and no desire to be, But Cycle world is now tits up, out of print. So its too bad, but I think there was a LITTLE Karma flowing.
Here is uncle Cliffy and some of us at 2 Wheel Tuesdays. Amazing guy, I told stories at his remembrance of Life
(1)
Reply
(0) 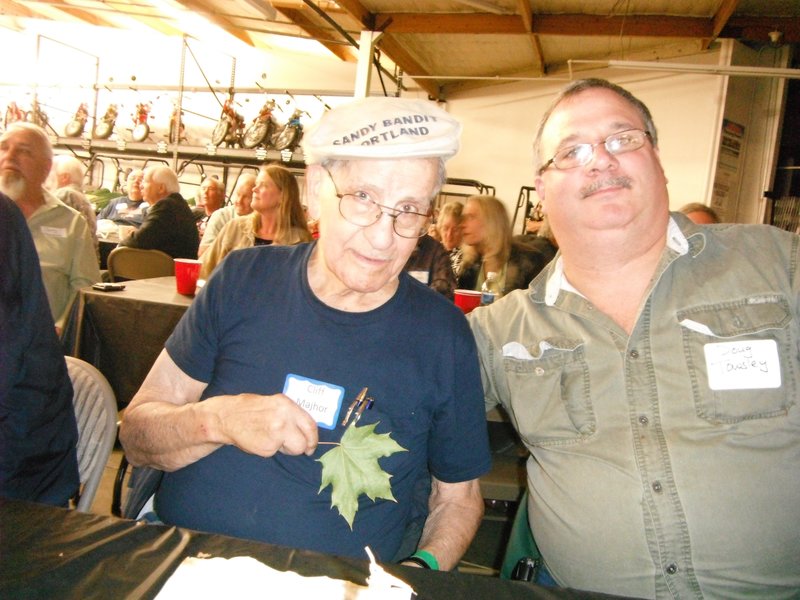 Here I am, And sitting with Uncle Cliffy at the Trailblazers Motorcycle club annual awards banquet, AKA"The Old Timers Banquet" Where stories are told, Lies shared and drinks were poured. AKA "Bench Racing". At One time Cliff got up in the Annual Triumph Dealers meeting circa around 1965 and told the CEO of Triumph Edward Turner "You guys dont know SH*T! If you would just run Triumph like Suzuki, all us dealers would die fat dumb & Happy!" I thought it was one of his half baked stories but heard from others who were there. Everyone thought that Turner, with his temper would kick Cliff out of the dealer network but actually agreed with Cliff. Years later it became known Turner had toured Japan and basically told the British companies nearly the same thing, although less profanity. I still dont know if Cliff KNEW about Turners trip or just a co-incidence as Cliff rode to the shop often on a small bore Suzuki and liked them.
(1)
Reply
(0)

LTC Wayne Brandon
3 mo
Sometimes the bosses need a kick in the butt from the trenches.
It can be very refreshing for someone to sound off even if it makes things tense in the beginning. It can be a great incentivize and catalyst for change.
Thanks for the picture - is there a story to the Maple leaf?
(1)
Reply
(0) 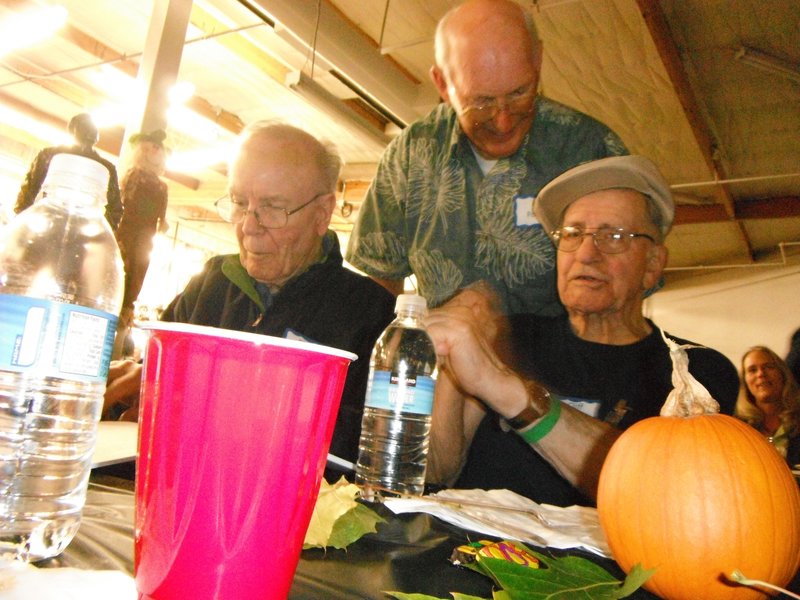 LTC Wayne Brandon - ah, the maple leaf! Okay, Cliff was part native American and had all sorts of theorys about food and why Americans got fat. So we were waiting to be served dinner and it was slow,, (Lasagna, normally does not do well in banquets, but that night was exceptional) So Cliff was waving around the Maple leaf joking about foods, venison and whether the food would run out before we were served as well as perhaps he should feed me something so I didnt chew his arm off, thats why Dave across the table snapped the photo. When it came time for desert, He told me to get him carrot cake but I shouldnt eat any Desert. ( I lost 45 pounds over the year after that was taken) Here is another. Thats Eldon Wright next to Cliff on the other side (I was on Cliffs Left, Mr Wright was Right!) Eldon also passed a few years ago as well. He got the award that night for man of the year for his contribution to Motorcycling. Eldon was the Western US Triumph representative and worked out of JoMo, AKA Johnson Motors out of California which the US at the time was split into TriCor for eastern Region and JoMo for the west. Eldon had a pivotal role from late 50s to early 70s and obscure trivia these days, but certain models of Triumphs that changed the world he played a central role in it. The TT Triumphs, the Desert Sleds, the T120SR and T100SR and the SC & C models.
(0)
Reply
(0)
Read This Next
RallyPoint Home