Pentagon Will Send Barricades, Helicopters With Troops to Southern Border

SPC (Join to see)
1.97K
2
4
0
0
0
MY COMMENT: "Here in Arizona and from what I can see on the news demonstrations are taking place advocating for those walking to the southern border unobstructed passage. Liberal politicians agree and some are proponents of no wall. Those that fail to have a medical examination prior to being released, or illegally enter the USA are doing so over the growing health concern over illegal immigrants bringing infectious diseases into the United States.

Legal immigrants and refugees are required to have a medical examination for migration to the United States, while they are still overseas. This is the responsibility of the Centers for Disease Control and Prevention (CDC), which provide instructions to the Panel Physicians who conduct the medical exams. The procedure consists of a physical examination, an evaluation (skin test/chest x-ray examination) for tuberculosis (TB), and a blood test for syphilis.

Requirements for vaccination are based on recommendations from the Advisory Committee on Immunization Practices. In addition, Soil-transmitted helminthiasis (STH) is a major concern as the people from that area are at high risk for neglected tropical diseases, including STH (mainly ascariasis, trichuriasis, and hookworm). Guatemala is known to have the highest rate of STH infections in Central America.

Currently, our Custom and Border Protection agency (CBP) is seeing people from 75 other nationalities using Mexico to cross into the United States. Some that were caught and identified came from Syria, Albania, China, Pakistan, Egyptians, Yemen, and Somalia. Some of these people that were apprehended were affected by the Ebola virus. The numbers are not insignificant - Examining just one country details 1,443 people from China were apprehended while crossing the U.S. border so far this year, with an additional 1,803 people either turning themselves into U.S. authorities at official ports of entry, or being caught attempting to illegally enter at the ports of entry.

Will the advocates of open borders to the United States also welcome Zimbabwean people that have the distinction of having the highest rate of communicable diseases. Perhaps the big four of South Africa, where they have very high rates of HIV/AIDS, Malaria, Hepatitis B, and Tuberculosis. The list goes on and on. We support much of these countries with aid, medicine, and medical practitioners.

The difference is not only what gets into our country and how it will affect our children when they enter our schools but the additional cost from both medical, educational, and living expenses. When the USA brought Afghanistan people for immigration and integration they were benefited with $30,000 dollars plus for expenses. Local communities were not notified of their entry into the community. The people that enter from our southern border cost the USA $750 per day (loaded cost).

Given the cost and risks associated with open borders, why would we not want to have structured immigration laws to include the current 1 million immigrants allowed each year?

We also have special considerations, example, an immigrant graduates from MIT in a field that is important to the USA can have a "pathway" to citizenship.

My apologies for this long comment. I am passionate about this topic because I believe this is just part of protecting the United States of America." 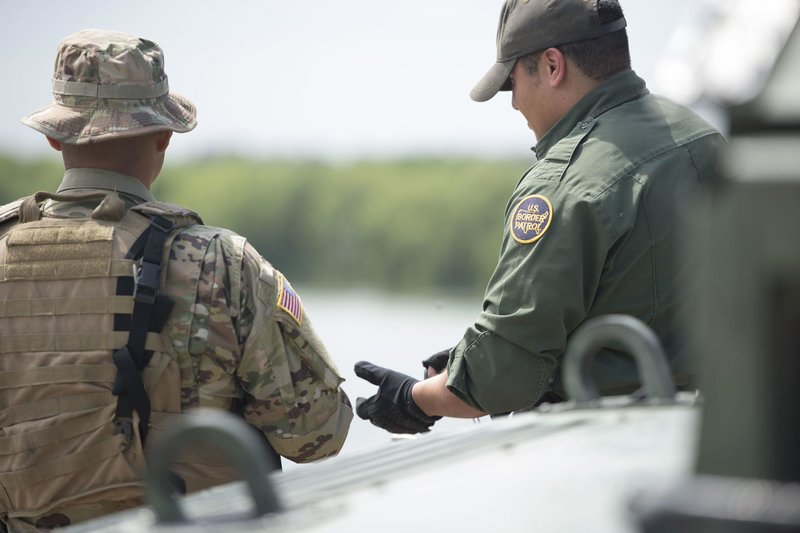 Pentagon Will Send Barricades, Helicopters With Troops to Southern Border

ImmigrationCenters for Disease Control and Prevention

LTC Stephan Porter
Posted >1 y ago
I wonder if they will leverage MilAir to send them back?
(1)
Comment
(0)

PO2 Robert Aitchison
Posted >1 y ago
It's not just liberal politicians, anybody with half a brain is a "proponent of no wall", honestly the only way I can think of to spend more taxpayer money for less effect than the stupid wall is to light piles of money on fire at the border in hopes that the illegals will get lost in the smoke and end up walking back South by mistake.

As for "growing health concerns", that sounds like something made up on the spot by some pundit. Personally I'm much more concerned with the lunatic anti-vaxers and those who overuse hand sanitizer and misuse antibiotics.

What is your source for your assertion that "The people that enter from our southern border cost the USA $750 per day (loaded cost)"?

I've lived almost my entire life within 150 miles of the US/Mexico border. I've seen firsthand the effects of illegal immigration and I'm certainly no proponent of open borders, I think that border security should be increased (through proven, cost effective methods like electronic detection systems) and we should be engaged in rigorous but smart enforcement (spend more time tracking down and deporting the known criminals instead of rounding up people who's only crime is illegal entry or a visa violation).

I also strongly agree we need to have structured immigration programs, but I also think we need to make it easier for people to legally immigrate. Do you have a criminal record, do you have a job and a place to live lined up, can you pass a physical exam/health screening? If the answers to these questions are No, Yes, Yes and Yes then welcome to America;, here's a work visa and the address where you can take free (required) English lessons and let's regularly check in with you and in the future we might talk about permanent residency and/or naturalization. If nothing else than such a policy would all but eliminate the incentive for those who are truly "seeking a better life" to risk crossing the border illegally.
(0)
Comment
(0)

SPC (Join to see)
>1 y
PO2 Robert Aitchison The $750 per day came from the CBP that included loaded cost. Senator Claire McCaskill quoted $657 per day but it was not clear on the detail for her math.

The statistics on health care came from the CDC. If these organizations operate on only on a half a brain in your opinion, please provide other authoritative trusted data sites that you could believe as improvements over these organizations.

You said, "(spend more time tracking down and deporting the known criminals instead of rounding up people whos only crime is illegal entry or a visa violation)". Are there other laws that you feel law enforcement should not enforce? In 2015 51 illegal immigrants were convicted of homicide crimes. Closer to you in CA Katie Sepich was shot and killed by an illegal that crossed the border on multiple occasions. Many countries use border walls effectively even though they may only have a half a brain.
(0)
Reply
(0)
Read This Next
RallyPoint Home