The World’s Most Politically Illiterate Statement

Lt Col Charlie Brown
833
70
11
17
17
0
« Expanding the Welfare State with Per-Child Handouts
The Education Debate: Opportunity for All…or Opportunity for None? »
The World’s Most Politically Illiterate Statement

Exactly one month ago, I declared that Congresswoman Ayanna Pressley deserved an award for the “world’s most economically illiterate statement” because of her claim that “poverty is not naturally occurring.”

In reality, poverty has been the norm throughout history. As documented by Professors Deirdre McCloskey and Don Boudreaux, it was only the development of capitalism (starting a few hundred years ago in Europe) that enabled humanity to enjoy amazing and unprecedented increases in living standards.

Moreover, Ms. Pressely was trying to argue that redistribution was the proper way to address poverty, and I concluded my column by noting “that part of her statement also is wrong, according to both U.S. data and global data.”

Today, I want to debunk another preposterous assertion.

David Smith of the U.K.-based Guardian wrote a column yesterday claiming that Biden’s so-called stimulus should be celebrated since it marks an end to forty years of Reaganomics.

…he will…be on a mission to restore faith in government. Confidence in it “has been plummeting since the late 60s to what it is now”, Biden noted in his remarks last week. His legislation, called the American Rescue Plan, can correct that with the biggest expansion of the welfare state in decades. …Biden knows better than anyone what that means. When he was born, in 1942, the president was Franklin Roosevelt, architect of the New Deal… When Biden was a student at the University of Delaware, Lyndon Johnson embarked on his project of the “Great Society”… Then came Ronald Reagan and his famous quip: “The nine most terrifying words in the English language are: I’m from the government and I’m here to help.” …He described Johnson’s “Great Society” as a fundamental wrong turn and set about dismantling it. …This orthodoxy held and dominated the political centre ground. …Biden’s could hardly be more of a polar opposite. …All the more reason to enjoy his victory lap and celebrate that four decades of Reaganism and “trickle down” economics are at an end.

Some of that political analysis is reasonable. FDR’s failed New Deal did expand government, as did LBJ’s failed War on Poverty.

And it’s also true that Reagan challenged their big-government orthodoxy and was somewhat successful in reining in the welfare state (“dismantling it” is a huge exaggeration, however).

But the author’s claim that there were “four decades of Reaganism” is breathtaking nonsense.

If Mr. Smith actually knew the subject matter and wanted to write an honest article, he could have made an argument about 16 years of Reaganism because we also benefited from a net reduction in the burden of government during Clinton’s eight years in office.

But the 21st century has been nothing but bad news for proponents of free markets. If you peruse Economic Freedom of the World, you’ll find that America’s level of economic freedom peaked in 2000 with a score of 8.67 (on a 1-10 scale).

Now the score for the United States has dropped to 8.22.

By the way, that’s not catastrophically bad. There’s no immediate risk of America becoming another Greece. And we’ll presumably never turn into Venezuela, no matter how hard Biden tries (it wouldn’t even happen if Vice President Harris took over).

That being said, what we’ve endured over the past two decades definitely is not Reaganism. The “Washington Consensus” is just a distant memory.

P.S. David Smith’s article is an example of sloppy journalism at a left-wing newspaper, but I’ll always have a bit of fondness for the Guardian because of the unintended compliment it bestowed upon me back in 2009. 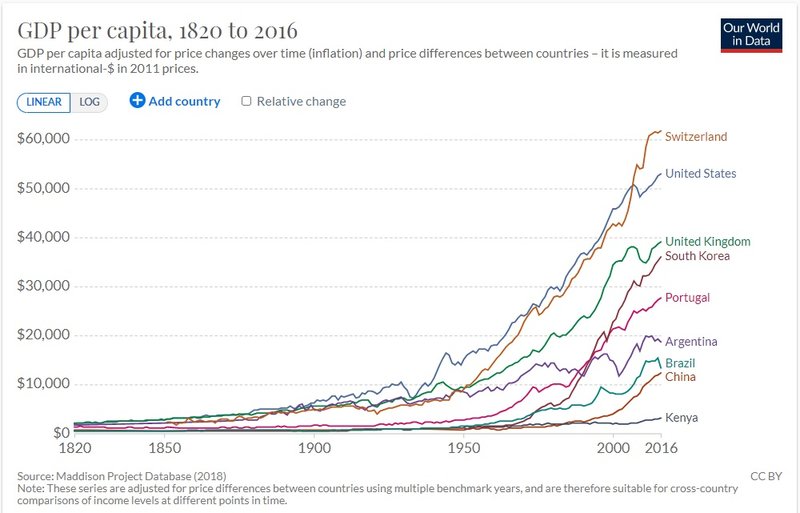 The World’s Most Politically Illiterate Statement

Posted from danieljmitchell.wordpress.com
Posted in these groups:

CPT Jack Durish
Posted 11 mo ago
Just by dipping their toes into free-market capitalism, China and India have raised millions out of poverty. Why can't they see this? Oh yes, the propagandists for the Left (the media) have hidden it...
(12)
Comment
(0)

Lt Col Charlie Brown
11 mo
Of course they have. It would mean giving up some power.
(7)
Reply
(0)

Poverty: Natural or Normal? | The IJohnoclast ep 22
Congresswoman Ayanna Pressley “poverty is not naturally occurring.” it is a policy choice
https://www.youtube.com/watch?v=0Ef29WJoIG8

Sgt (Join to see)
Posted 11 mo ago
Excellent report Lt Col Charlie Brown!!! In our world of 2021, "There are none so blind as those who refuse to see!: There are many who have stated a similar quote, but it is so true regardless of who states it!!!
(6)
Comment
(0)
Show More Comments
Read This Next
RallyPoint Home