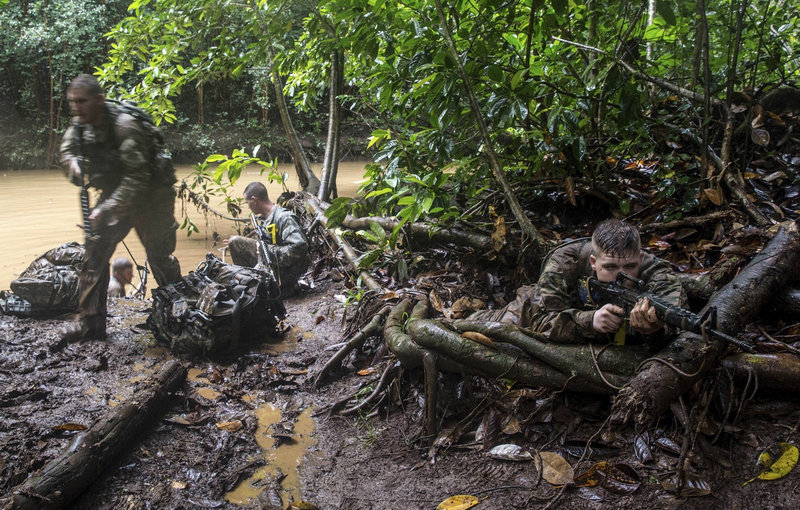 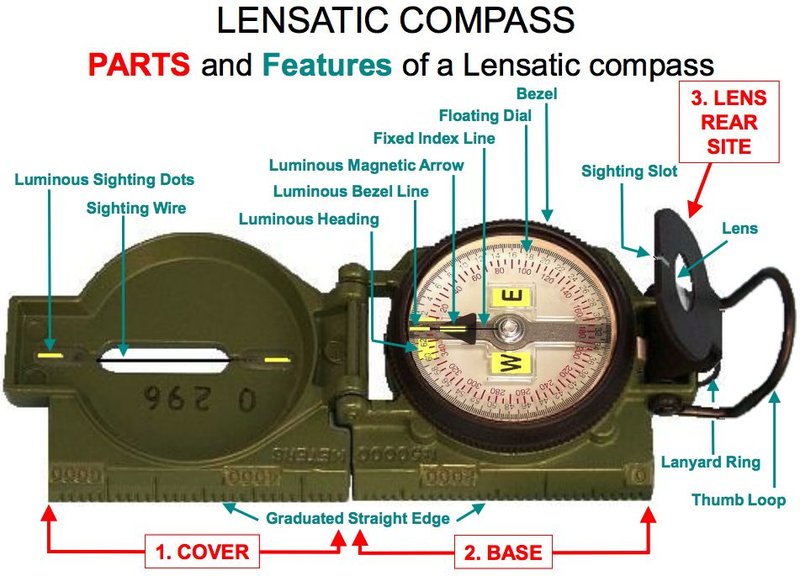 Ha, ha my friend SSG (Join to see). Modern forces seem to rely too much on electronics including GPS systems IMHO.
I my time in the infantry we relied on map reading skills and a lensatic compass to determine where we were and where we needed to be. The terrain map was the most important tool we had in land navigation - dismounted and mounted.

SSgt Boyd Herrst
>1 y
During my time out on TDRL I had worked with AFJROTC Cadets doing map skills with a compass like you had used. We were fortunate to recieve several in exceptionally good working condition(new).. We would have to account for them at the end of each SAR test.. on an accountability form . With each one’s number listed and sent in at quarterly intervals. Them compasses were absolutely the Cat’s meow... on one of them sorties a cadet had it in his rucksack and it fell off the back of the bed.. the truck backed too far and rolled over the rucksack.. upon inspection it was determined the plastic around the compass was cracked. We noted that on the accountability form and they gave us an address and we sent the compass back, 3 weeks later another compass showed up in the commandant’s Mail. His account was also credited for the postage spent to send it in. We had to fill a survey on reception of the new compass and it’s condition received. The cadet squadron had a Cadet Tech Sgt as it’s NCOIC of property.. overseen by a Sr Ret’d AF NCO... advisor/instructor . (IMHO) I believe that Cadet did a better job of filling the forms when that advisor wasn’t hovering over his shoulder. I believed that Ret’d MSGT was just trying to make sure e’thing was done corrrctly.. I’d do the same if it was i(not hover over, just go over it to certify is was done correctly..
(4)
Reply
(0)

CW4 Angel C.
>1 y
I guess the infantry and the airborne cause as a mechanic I got plenty CTT training every week on all Soldier tasks. When I went to PLDC in Germany I finished land nav right around an hour with the top SETAF (ABN) Infantry guys.
(3)
Reply
(0)

SSgt Boyd Herrst
>1 y
We checked around and found some similar scouts compasses and put it on the board where they could be purchased.... some of the cadets purchased them and practiced with them.
(2)
Reply
(0)

SSgt Boyd Herrst
>1 y
Sgt. Greg Lawritson ; the team and I had opportunity to go out to a Edward Hines Wayne county, Mi. Park (there are several park sites including a 19 hole Golf course)..
the markers were already set out..
We completed all the stations in good time.. we knew that the Coordinator might make changes.. but we just accepted that as par for the course.. Next we went out and did Find changes (numbered stations changed; 1 became 3,5 became 7..
He just reset them.. my team of ‘misfits’ still came out on top... they were no longer that.. We had some unannounced guests; some Army Rangers out of Guard Unit as umpires .. they didn’t actually enforce the rules.. they bent them .. I think they wanted it done quickly as posdible. I asked one later why they done it... it doesn't help Anybody ... I think it hinders.. Another said it didn’t matter.. you go out on a actual SAR(search n rescue). There are
Mostly ‘common sense’ rules.. sometimes rigid rules can hinder a
SAR.... Sure you need al your ropes n splints.. Rats(rations for you RP civilians).. knives n hatchets.. a stone.. it doesn’t hurt to have few fun things.. who are your potential rescue subjects? Children? A little rag teddy bear or raggedy ann doll..
gives scared kids , even some adults.. something take their minds off trauma, even temporarily..
It was totally an awesome day.. nice start’g our... rainy, even a little cool later as the day wound down...
We also used a ranger as a surprise
Medical prob... he slipped in a muddy ditch near end of the course and sprained his ankle and pulled a ligament.. The lead Ranger led the cadets through that.. and they fixed that ranger up good. A doctor examined him and the team leader told us the doc said the cadets did a great job doing the dressing over the wound... it had to be rewrapped a few times and the final wrap was the best.. some unplanned activity adds pinache to a sorty . it was just suppose to be a compass course..
the first aid sit-rep was a freebie ..
At least it wasn’t me.. my misfortune would be it’d be my right ankle.. (my gas pedal foot).
These Cadets were part of the same Cadet Squadron I’d been a member of before I joined Reserves and then regular AF.
I was helping as a favor to the Commandant.. The only pay was the privilege to be helping to mold these cadets to be ready to be the next leaders.. I helped a lot on their weekend exercises .. I got a occasional certif. Of appreciation.. from various Generals tied to the AFJROTC program and some that just heard of my volunteering to help out.. yeah... patting myself on the shoulder.. so what! A little self angrandizement... yeah.. so be it!.. I’m a member of the V.F.W. And my working with those Cadets is a form of community service under youth activities and Americanism... That counted for a lot of points.. in V.F.W. Programs..
So it wasn’t just my own angrandizing.. I was doing it for..
The post Cmdr. That was before me.. maybe a couple .. got points toward their All State White hats.. ..
They helped the cadets and raised $$ for extracurricular activities like trips to the NASA museums.. The AF only paid for part of the trips.. that’s all part of donations for community. Service..
(1)
Reply
(0) 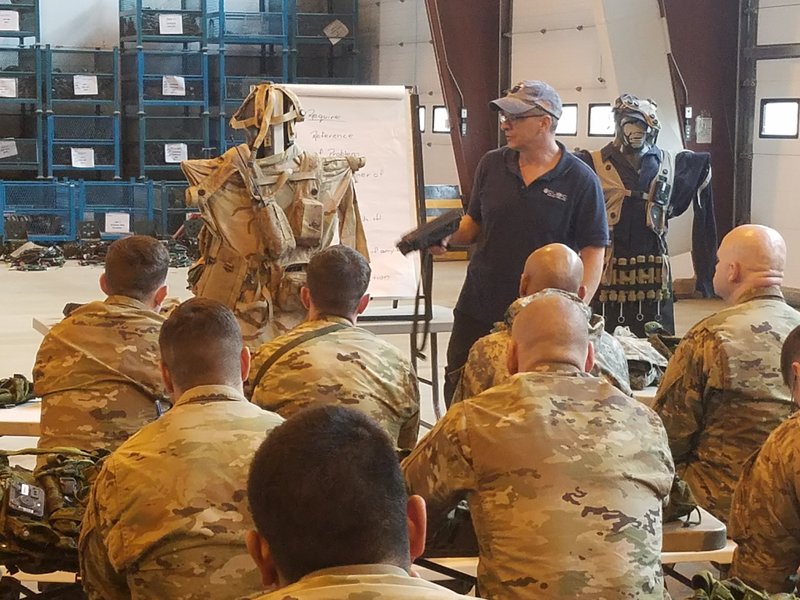 They should use a Canadian and US Marine equipped 'miles' gear of sorts. If they wore this vest during land nav, they would know exactly where the soldiers were at. This is what the Canadians and the US Marines use when they do their war games. Besides indicating when a soldier or civilian is hit, it tells the medic what kind of injury they have. These features don't apply for Land Navigation but it does act as a homing device.

Why can't soldiers Nationwide wear something like this when they are doing the Land Navigation course? We lost a soldier recently who was found after 2 days and he had died of dehydration stateside. Why have they not thought about this as a Fail-Safe? You can fire the commander of the land nav course or the Commanding General but you still can't bring that person back. Why not invest in this?
COL Mikel J. Burroughs COL M Stock LTC Stephen F. LTC Stephen C. Col (Join to see) Lt Col Charlie Brown MAJ David Potter CPT Pedro Meza SFC Joe S. Davis Jr., MSM, DSL 1LT (Join to see) SGT David A. 'Cowboy' Groth SFC William Farrell SFC George Smith MSG (Join to see) CPT Jack Durish Lt Col John (Jack) Christensen SMSgt Minister Gerald A. "Doc" Thomas CSM Charles Hayden
(11)
Comment
(0)
Show More Comments
Read This Next
RallyPoint Home