E. Edwin Spencer had no way of knowing he would be making history that day when he knocked on Henning Jacobson’s door in Cambridge, Mass. All he knew was that smallpox was spreading in their city at the dawn of the 20th century, and as a doctor and the chairman of the board of health, it was his job to make sure all residents had been vaccinated against the deadly disease within the last five years.

More than a century later, as millions of Americans get vaccinated voluntarily against the coronavirus and society starts to reopen, questions loom about how far businesses and government can go to ensure safety. Can airlines, concert venues and other businesses refuse service to anyone who chooses not to get vaccinated? The Biden administration has insisted there will be no national mandate, but it is still working with the private sector to create a vaccination passport or certification.

And thanks to that knock on the door in March 1902, there’s a legal precedent to guide policymakers and the courts. It’s a story recounted in detail by historian Michael Willrich in his book “Pox: An American History.”

Henning Jacobson was a Swedish immigrant and naturalized U.S. citizen who had come to America with his family as a teenager. After seminary in the Midwest, he was sent to Cambridge to preach in Swedish to a largely immigrant flock. He often stood at the Boston docks, looking for newly arrived Swedes to connect with jobs, housing and the local Swedish community. A mild-mannered man in a moderate denomination, he was not known for fiery sermons or outlandish opinions.

Decades before Jacobson’s move to Massachusetts, the commonwealth had led the nation in passing vaccine laws. Since 1827, Boston schoolchildren had been required to show proof of smallpox vaccination in order to attend public school. And since 1855, a state law allowed local health boards, in the event of an outbreak, to order all adults to be vaccinated and revaccinated, since the smallpox vaccine lasted less than 10 years. By the turn of the century, 13 other states required proof of vaccination for schoolchildren, and 11 had compulsory vaccination laws for adults.

Though a pastor, Jacobson’s objection to being vaccinated was not religious but personal; he had been vaccinated for smallpox back in Sweden when he was 6 and had a bad reaction. He didn’t want to go through that again, and he didn’t want to subject his children to it in case the bad reaction was hereditary.

At first, Spencer, the board of health chairman, noted Jacobson’s refusal but took no action. Vaccine hesitancy wasn’t that uncommon; though largely effective, vaccines at the time were unregulated, and vaccine injury was an order of magnitude more common than it is today.

Across the Charles River in Boston, where the smallpox outbreak had begun, the board of health chairman wasn’t so mild. Samuel Durgin had offered free vaccinations to hundreds of thousands of residents, but when that failed to stem the tide of infected patients, he enlisted “virus squads” — gangs of policemen and medical officials who held down and forced people, often homeless men, to be vaccinated, according to the New England Journal of Medicine. One man was beaten so badly by police that after he was vaccinated he had to get stitches for a wound to his head.

Durgin had also publicly challenged any anti-vaccine individuals to come with him to the island where sick patients were isolated and treated. One, Immanuel Pfeiffer, accepted. He nearly died of smallpox. Many were angered that Durgin let Pfeiffer back into the community before he fell ill, where he could have ignited another outbreak, but Durgin thought the headlines — “Anti-vaccinationist May Not Live,” “Chairman Durgin Comes Up Smiling” — were worth the risk, according to the New England journal.

Still, the outbreak continued to spread, and not just to Cambridge but to within two blocks of Jacobson’s home. So when Spencer returned and the pastor still refused, he did what the law allowed him to do: He fined Jacobson $5 (about $153 today).

Instead of paying the fine, Jacobson and a handful of other vaccine refusers appealed to a higher court, where they caught the attention and support of anti-vaccination societies. Those societies provided Jacobson with powerful attorneys, who argued the case all the way to the Supreme Court.

There had been a number of decisions in other state courts on compulsory vaccination laws, and they were all over the map. Some upheld the laws, some struck them down or placed limitations. Clearly, a national policy was needed.

The Supreme Court handed down its decision in February 1905; in a 7-2 opinion, Justice John Marshall Harlan — a former Kentucky enslaver who fought for the Union in the Civil War and wrote a blistering dissent against Plessy v. Ferguson — said public health could supersede individual rights:

“[T]he liberty secured by the Constitution of the United States to every person within its jurisdiction does not import an absolute right in each person to be, at all times and in all circumstances, wholly free from restraint. There are manifold restraints to which every person is necessarily subject for the common good.”

And while the high court in Massachusetts had ruled in favor of the board of health, it also made clear that “it is not in their power to vaccinate [Jacobson] by force.” The Supreme Court didn’t contradict this, and in fact, placed more safeguards, saying “common good” laws had to be reasonable. That’s important, because “virus squads” weren’t limited to Boston; immigrants in tenements were also forcibly vaccinated in New York City, as were Black Americans in Kentucky.

By the time of the Supreme Court’s decision, nearly three years after Jacobson had first refused to be vaccinated, the smallpox outbreak in Cambridge had died down and would never return. (Smallpox was declared eradicated from the planet in 1979.)

The government began regulating the quality of vaccines, and in 1922, another Supreme Court case, Zucht v. King, specifically affirmed proof of vaccination laws for public schoolchildren.

Jacobson paid his fine and went back to his mild-mannered life of preaching to his flock. The anti-vaccine movement had only just begun. 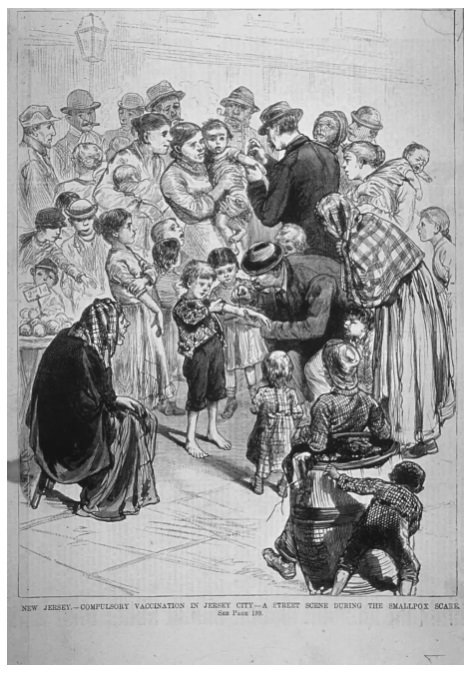 This illustration depicts a compulsory vaccination drive in New Jersey circa the 1880s.(National Library of Medicine)
(6)
Comment
(0)

Lt Col Leslie Bryant
Posted 12 mo ago
Politicization of vaccines during the 2020 Presidential race by Biden and Harris has not been helpful to Americans getting vaccinated! Biden and Harris repeatedly claimed in debates in 2020 that the COVID vaccine was not safe because it had been manufactured too quickly and now in 2021 they claim it’s safe. Well what changed between 2020 and 2021? Were new ingredients added, was it reformulated, is it a different vaccine entirely? NO, the only thing that changed is the party now promoting vaccinations, the Democrat Party and Democrat leaders Biden and Harris! Vaccines have been around a long time and repeatedly proven to be safe! The US also proved during World War 2 that lots of things could be manufactured quickly like ships, aircraft, tanks if certain experts were diverted to that task, Companies that could do unique things changed their mission to those unique things temporarily and the country worked together. That is exactly what occurred in 2020 under the Defense Procurement Act and it is sad people do not know their history! Biden and Harris showed an utterly lack of appreciation of and knowledge of US history when proclaiming the COVID vaccine unsafe! An apology and an admission by Biden and Harris that they were wrong and lying would go a long way to getting some naysayers to get vaccinated! I won’t be waiting because I know that apology won’t ever come. Biden, Harris and the Democrat Party could have saved this country a lot of grief by knowing their history and being honest!
(0)
Comment
(0)
Read This Next
RallyPoint Home