Maj Marty Hogan
1.91K
93
9
25
25
0
William Jennings Bryan (March 19, 1860 – July 26, 1925) was an American orator and politician from Nebraska. Beginning in 1896, he emerged as a dominant force in the Democratic Party, standing three times as the party's nominee for President of the United States. He also served in the United States House of Representatives and as the United States Secretary of State under Woodrow Wilson. Just before his death he gained national attention for attacking the teaching of evolution in the Scopes Trial. Because of his faith in the wisdom of the common people, he was often called "The Great Commoner".[1]

Born and raised in Illinois, Bryan moved to Nebraska in the 1880s. He won election to the House of Representatives in the 1890 elections, serving two terms before making an unsuccessful run for the Senate in 1894. At the 1896 Democratic National Convention, Bryan delivered his "Cross of Gold speech" which attacked the gold standard and the eastern moneyed interests and crusaded for inflationary policies built around the expanded coinage of silver coins. In a repudiation of incumbent President Grover Cleveland and his conservative Bourbon Democrats, the Democratic convention nominated Bryan for president, making Bryan the youngest major party presidential nominee in U.S. history. Subsequently, Bryan was also nominated for president by the left-wing Populist Party, and many Populists would eventually follow Bryan into the Democratic Party. In the intensely fought 1896 presidential election, Republican nominee William McKinley emerged triumphant. Bryan gained fame as an orator as he invented the national stumping tour when he reached an audience of 5 million people in 27 states in 1896.

Bryan retained control of the Democratic Party and won the presidential nomination again in 1900. In the aftermath of the Spanish–American War, Bryan became a fierce opponent of American imperialism, and much of the campaign centered on that issue. In the election, McKinley again defeated Bryan, winning several Western states that Bryan had won in 1896. Bryan's influence in the party weakened after the 1900 election, and the Democrats nominated the conservative Alton B. Parker in the 1904 presidential election. Bryan regained his stature in the party after Parker's resounding defeat by Theodore Roosevelt, and voters from both parties increasingly embraced the progressive reforms that had long been championed by Bryan. Bryan won his party's nomination in the 1908 presidential election, but he was defeated by Roosevelt's chosen successor, William Howard Taft. Along with Henry Clay, Bryan is one of the two individuals who never won a presidential election despite receiving electoral votes in three separate presidential elections held after the ratification of the Twelfth Amendment.

After the Democrats won the presidency in the 1912 election, Woodrow Wilson rewarded Bryan's support with the important cabinet position of Secretary of State. Bryan helped Wilson pass several progressive reforms through Congress, but he and Wilson clashed over U.S. neutrality in World War I. Bryan resigned from his post in 1915 after Wilson sent Germany a note of protest in response to the sinking of Lusitania by a German U-boat. After leaving office, Bryan retained some of his influence within the Democratic Party, but he increasingly devoted himself to religious matters and anti-evolution activism. He opposed Darwinism on religious and humanitarian grounds, most famously in the 1925 Scopes Trial. Since his death in 1925, Bryan has elicited mixed reactions from various commentators, but he is widely considered to have been one of the most influential figures of the Progressive Era. 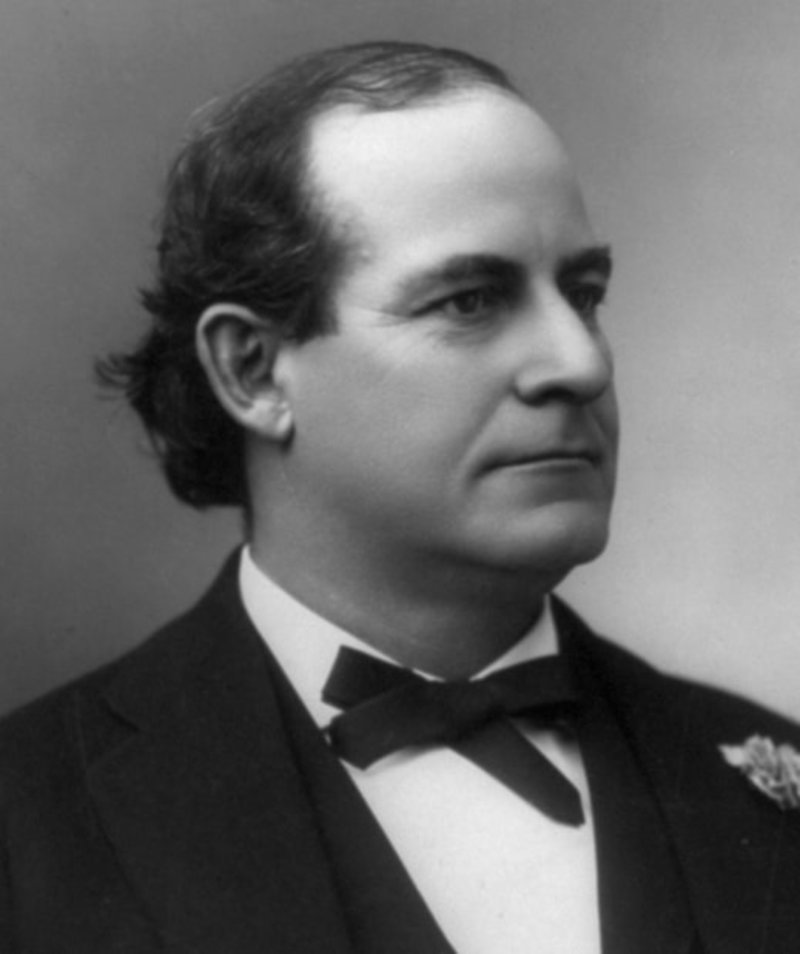 Posted from en.wikipedia.org
Posted in these groups: U.S. House of Representatives

Thank you, my friend Maj Marty Hogan for making us aware that March 19 is the anniversary of the birth of American orator and politician from Nebraska William Jennings Bryan who in 1896, he emerged as a dominant force in the Democratic Party, standing three times as the party's nominee for President of the United States. He also served in the United States House of Representatives and as the United States Secretary of State under Woodrow Wilson. Because of his faith in the wisdom of the common people, he was often called "The Great Commoner".

It is interesting that William Jennings Bryan has been remembered with his full name. Many of us were only called by our full name when we were in trouble. :-)


William Jennings Bryan -The Ideal Republic - Speech, 1922
"William Jennings Bryan (March 19, 1860 July 26, 1925) was an American politician in the late-19th and early-20th centuries. He was a dominant force in the liberal wing of the Democratic Party, standing three times as its candidate for President of the United States (1896, 1900 and 1908). He lost, each time by a bigger margin. He served in Congress briefly as a representative from Nebraska and was the 41st United States Secretary of State under President Woodrow Wilson, 1913-1916. Bryan was a devout Presbyterian, a supporter of popular democracy, an enemy of gold, banks and railroads, a leader of the silverite movement in the 1890s, a peace advocate, a prohibitionist, and an opponent of Darwinism on religious grounds. With his deep, commanding voice and wide travels, he was one of the best known orators and lecturers of the era. Because of his faith in the goodness and rightness of the common people, he was called "The Great Commoner."
In the intensely fought 1896 and 1900 elections, he was defeated by William McKinley but retained control of the Democratic Party. With over 500 speeches in 1896, Bryan invented the national stumping tour, in an era when other presidential candidates stayed home. In his three presidential bids, he promoted Free Silver in 1896, anti-imperialism in 1900, and trust-busting in 1908, calling on Democrats to fight the trusts (big corporations) and big banks, and embrace anti-elitist ideals of republicanism. President Wilson appointed him Secretary of State in 1913, but Wilson's strong demands on Germany after the Lusitania was torpedoed in 1915 caused Bryan to resign in protest.
After 1920 he was a strong supporter of Prohibition and energetically attacked Darwinism and evolution, most famously at the Scopes Trial in 1925. Five days after winning the case, he died in his sleep."
https://www.youtube.com/watch?v=sKwS-yrI49w

Background from bryan.edu/about/college-history/william-jennings-bryan/
William Jennings Bryan was hard-working, courageous, and noble in moral principles as well as friendly, charming, and optimistic. He spoke for the common man, and so he became known as “The Great Commoner”.

Personal Life
William Jennings Bryan lived a full and busy personal life. Born in Salem, Illinois, March 19, 1860, he graduated from Illinois College and Union College of Law.
As a boy he attended both a Baptist and a Methodist Sunday School, received Jesus Christ as his Savior in a Presbyterian church, and was active in the Presbyterian church the rest of his life, rising to become Vice-Moderator of the General Assembly. After marrying Mary Baird, Bryan moved to Lincoln, Nebraska, where the three Bryan children grew up. The Bryans moved to Miami, Florida, in 1920, and they also had a summer home in Asheville, North Carolina. In personality, Bryan was hard-working, courageous, and noble in moral principles as well as friendly, charming, and optimistic. On the one hand he spoke for the common man, was called “The Great Commoner,” and was very popular with the average person. On the other hand, he was friends with or at least met such notables as listed below.

Politics
In his political life, Bryan viewed his role as doing God’s work. He was U.S. Representative from Nebraska to Congress in 1891-95. At thirty-six he was nominated for president in 1896 by the Democrats and seven other parties. Although he received forty-seven percent of the vote and won in more states and territories than William McKinley, voting fraud stole six states from Bryan, and he lost this election and those of 1900 and 1908.
In 1912 Bryan helped Woodrow Wilson get elected, and Wilson named Bryan his Secretary of State. While in this office for three years, Bryan negotiated peace treaties with thirty nations and helped promote Wilson’s progressive policies and strengthen the U.S. position in the Caribbean. During the fifteen years he was the leader of the Democratic Party, Bryan also acted as the watchdog of Congress and the conscience of the country.
Policies and Programs
“I believe in speaking well of any policy that is good, regardless of which party is supporting it."
William Jennings Bryan was a progressive in his policies and programs, but first and last he was a man of principle. “I believe in speaking well of any policy that is good, regardless of which party is supporting it,” he said. Had he been president, he probably could not have enacted more ideas and programs than the many he promoted, which became realities when enough of the country caught up with his far-sighted thinking. These measures include the following:
• The 16th, 17th, 18th, and 19th Amendments to the Constitution (graduated income tax, direct election of senators, prohibition of liquor, woman suffrage)
• Direct primaries and legislation
• Extensive changes in the operation of the House of Representatives
• Alterations in the powers of the Supreme Court
• Federal Reserve Act
• Federal Trade Commission
• Federal Farm Loan Act
• Government regulations of railroad and telegraph/telephone as well as safety devices and pure food processing
• Government control of currency and banking
• Regulations regarding trusts and corporate monopolies
• Establishment of departments of health and education and labor
• Public regulation of political campaign contributions
• Voting reform, the initiative, the referendum
• Reform to make the Constitution more easily amendable
• Influence on the revision of state constitutions
• Public disclosure of newspaper ownership and the signing of editorials
• An array of labor laws and reforms (workers’ compensation, the minimum wage, the eight-hour day, improved conditions for seamen and railroad employees, prohibition of injunctions in labor disputes)
• Tariff reform
• Promotion of public parks
• Defense of rights of minorities
• Anti-imperialism
• Home rule for the Philippines and Puerto Rico
• Settling of international differences through peaceful arbitration
• Protection of the Panama Canal
• Strengthening of Latin American relations (through advocating courses in Spanish and Latin American affairs, scholarships, exchanges of professors, helping to found the University of Miami)
• Support of education (including African American education)
• Legislation to provide for truly liberal equal-time consideration of Darwinian evolution and Biblical creationism in the public schools.
The eventual general acceptance of Bryan’s policies and programs is a testimony to the accuracy of historian Henry Commanger’s observation that though victimized at the polls, Bryan has been “vindicated by history.”
Publications & Orations
As a communicator, William Jennings Bryan was without peer in his use of the mass media. He was editor-in-chief of the Omaha World-Herald and founded and edited The Commoner, a weekly paper of sixteen pages which ran for 23 years and had a circulation of 285,000. He also wrote some fifteen books, edited two collections of orations, and produced numerous pamphlets. His Sunday School lessons were syndicated in over a hundred newspapers with an estimated readership of fifteen million.
For the 1908 campaign, Bryan made a movie with a recording of his speech and thus was the first presidential candidate shown in motion pictures and anticipated the first talking motion picture by many years. In 1922, his first radio address is estimated to have had an audience of sixty million.
It was as a speaker that Bryan excelled. Called “the silver-tongued orator,” William Jennings Bryan is usually considered to be one of the world’s greatest orators. He could speak without shouting to thousands in the out-of-doors without any means of amplification and be heard clearly. In the 1896 presidential campaign, he traveled 18,000 miles, made over 2,500 speeches, and sometimes spoke as many as twenty-five times in a single day.

TSgt Joe C.
Posted >1 y ago
Tough position to be in.