Hadfield, who was raised on a farm in southern Ontario, was inspired as a child when he watched the Apollo 11 Moon landing on TV. He attended high school in Oakville and Milton and earned his glider pilot licence as a member of the Royal Canadian Air Cadets. He joined the Canadian Armed Forces and earned an engineering degree at Royal Military College. While in the military he learned to fly various types of aircraft and eventually became a test pilot and flew several experimental planes. As part of an exchange program with the United States Navy and United States Air Force, he obtained a master's degree in aviation systems at the University of Tennessee Space Institute.

In 1992, he was accepted into the Canadian astronaut program by the Canadian Space Agency. He first flew in space aboard STS-74 in November 1995 as a mission specialist. During the mission he visited the Russian space station Mir. In April 2001 he flew again on STS-100 and visited the International Space Station (ISS), where he walked in space and helped to install the Canadarm2. In December 2012 he flew for a third time aboard Soyuz TMA-07M and joined Expedition 34 on the ISS. He was a member of this expedition until March 2013 when he became the commander of the ISS as part of Expedition 35. He was responsible for a crew of five astronauts and helped to run dozens of scientific experiments dealing with the impact of low gravity on human biology. During the mission, he also gained popularity by chronicling life aboard the space station and taking pictures of the Earth and posting them on various social media platforms to a large following of people around the world. He was a guest on television news and talk shows and gained popularity by playing the International Space Station's guitar in space. His mission ended in May 2013 when he returned to Earth. Shortly after returning, he announced his retirement, capping a 35-year career as a military pilot and an astronaut. 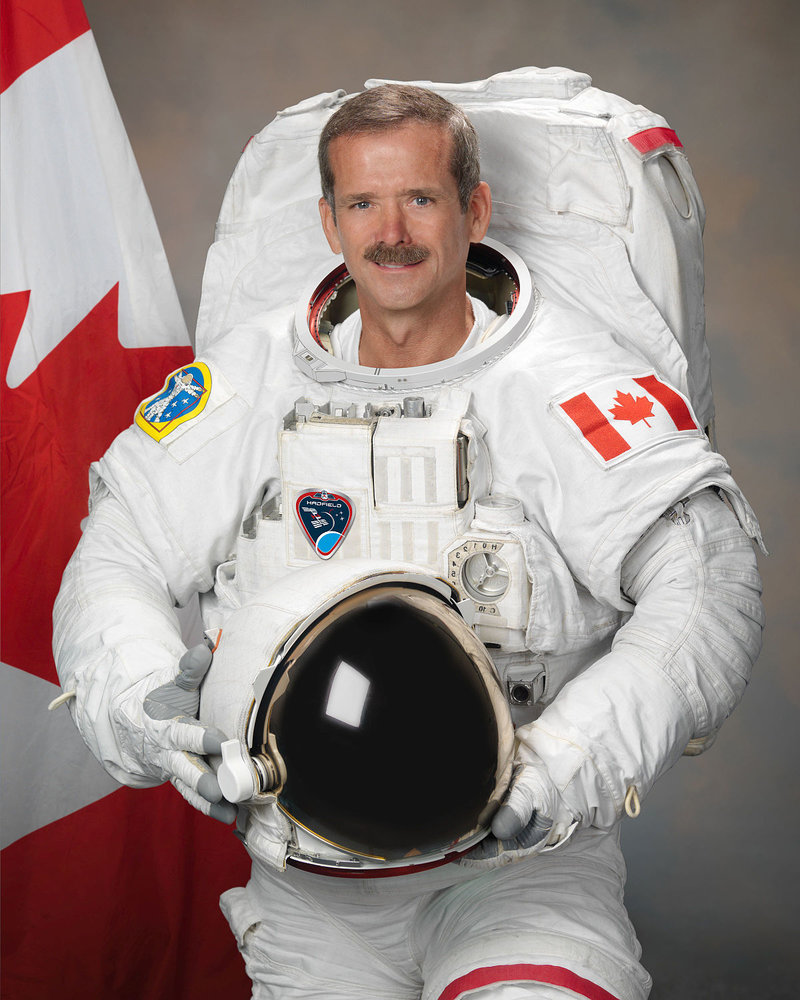 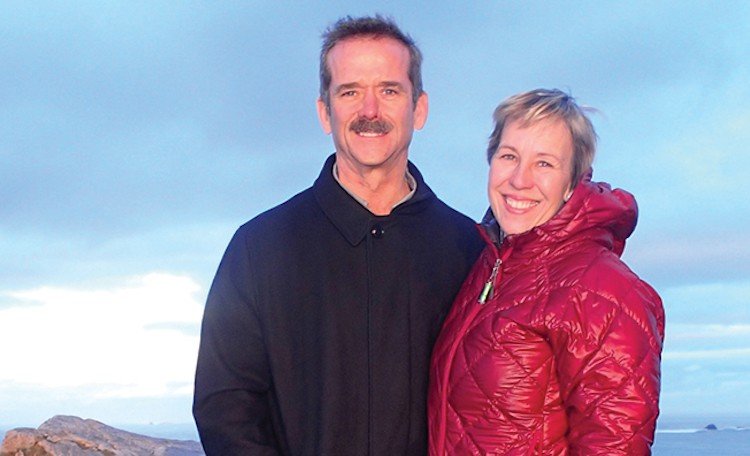 Education: Graduated as an Ontario Scholar from Milton District High School in 1977; Received a bachelor's degree in mechanical engineering (with honours), Royal Military College, Kingston, Ontario, Canada, in 1982; Conducted post-graduate research at the University of Waterloo, Ontario in 1982; Received a Master of Science in aviation systems at the University of Tennessee in 1992.

Hadfield joined the Canadian Armed Forces in May 1978. He spent two years at Royal Roads Military College, in Victoria, British Columbia, followed by two years at the Royal Military College in Kingston, Ontario, where he received a bachelor's degree in Mechanical Engineering (with honours) in 1982. Hadfield underwent basic flight training in Portage La Prairie, Manitoba, for which he was named top pilot in 1980. In 1983, he took honours as the overall top graduate from Basic Jet Training in Moose Jaw, Saskatchewan, and in 1984-1985, he trained as a fighter pilot in Cold Lake, Alberta on CF-5s and CF-18s.

For the next three years Hadfield flew CF-18s for the North American Aerospace Defence Command (NORAD) with 425 Squadron, during which time he flew the first CF-18 intercept of a Soviet "Bear" aircraft. He attended the United States Air Force (USAF) Test Pilot School at Edwards Air Force Base, in California, and upon graduation, served as an exchange officer with the U. S. Navy at Strike Test Directorate at the Patuxent River Naval Air Station. His accomplishments from 1989 to 1992 included testing the F/A-18 and A-7 aircraft; performing research work with NASA on pitch control margin simulation and flight; completing the first military flight of F/A-18 enhanced performance engines; piloting the first flight test of the National Aerospace Plane external burning hydrogen propulsion engine; developing a new handling qualities rating scale for high angle-of-attack test; and participating in the F/A-18 out-of-control recovery test program. In total, Hadfield has flown over 70 different types of aircraft.

In June 1992 Chris Hadfield was selected to become one of four new Canadian astronauts from a field of 5330 applicants. He was assigned by the Canadian Space Agency (CSA) to the NASA Johnson Space Center in Houston, Texas in August of the same year, where he addressed technical and safety issues for Shuttle Operations Development, contributed to the development of the glass shuttle cockpit, and supported shuttle launches at the Kennedy Space Center, in Florida. In addition, Hadfield was NASA's Chief CapCom, the voice of mission control to astronauts in orbit, for 25 space shuttle missions. From 1996 to 2000, he represented CSA astronauts and coordinated their activities as the Chief Astronaut for the CSA.

From 2001-2003, Hadfield was the Director of Operations for NASA at the Yuri Gagarin Cosmonaut Training Centre (GCTC) in Star City, Russia. His work included coordination and direction of all International Space Station crew activities in Russia, oversight of training and crew support staff, as well as policy negotiation with the Russian Space Program and other International Partners. He also trained and became fully qualified to be a flight engineer cosmonaut in the Soyuz TMA spacecraft, and to perform spacewalks in the Russian Orlan spacesuit.

Hadfield is a civilian CSA astronaut, having retired as a Colonel from the Canadian Air Force in 2003 after 25 years of military service. He was Chief of Robotics for the NASA Astronaut Office at the Johnson Space Center in Houston, Texas from 2003-2006, and was Chief of International Space Station Operations there from 2006-2008.

Space flights: In November 1995 Hadfield served as Mission Specialist 1 on STS-74, NASA's second space shuttle mission to rendezvous and dock with the Russian Space Station Mir. During the flight, the crew of Space Shuttle Atlantis attached a five-tonne docking module to Mir and transferred over 1,000 kg of food, water, and scientific supplies to the cosmonauts. Hadfield flew as the first Canadian mission specialist, the first Canadian to operate the Canadarm in orbit, and the only Canadian to ever board Mir.

In April 2001 Hadfield served as Mission Specialist 1 on STS-100 International Space Station (ISS) assembly Flight 6A. The crew of Space Shuttle Endeavour delivered and installed Canadarm2, the new Canadian-built robotic arm, as well as the Italian-made resupply module Raffaello. During the 11-day flight, Hadfield performed two spacewalks, which made him the first Canadian to ever leave a spacecraft and float freely in space. In total, Hadfield spent 14 hours, 54 minutes outside, travelling 10 times around the world.

From 2008-09, Hadfield served as the backup for Dr. Bob Thirsk for Expedition 20/21, a long-duration spaceflight, training to live and work on board the ISS for a period up to six months. After this assignment, he supported the ISS Operations Branch and developed Emergency procedures for the ISS.

From May 10 to 23, 2010 Hadfield was the Commander of NEEMO 14, a NASA undersea mission to test exploration concepts living in an underwater facility off the Florida coast. NEEMO 14 used the ocean floor to simulate exploration missions to the surface of asteroids, moons and Mars in order to gain a better understanding of how astronaut crews interact with equipment including advanced spacesuits, a lander, a rover and robotic arms.

In June 2010, Hadfield was part of the Pavilion Lake research team, located 420 km northeast of Vancouver. Pavilion Lake is one of the few places on Earth where microbialites are found. The team used a combination of remotely operated vehicles, autonomous underwater vehicles, SCUBA divers and DeepWorker submersibles to help understand how the microbialites formed and possibly make it easier to identify potential forms of extraterrestrial life on future missions to Mars.

In September 2010, Chris Hadfield was assigned to Expedition 34/35. On December 19, 2012 he launched aboard the Russian Soyuz, enroute to becoming the second Canadian to take part in a long-duration spaceflight aboard the ISS. On March 13, 2013 he became the first Canadian to command a spaceship as Commander of the ISS during the second portion of his five-month stay in space. On May 13, Hadfield, Tom Marshburn and Roman Romanenko landed in Kazakhstan after travelling almost 99.8 million kilometres while completing 2,336 orbits of Earth. The trio spent 146 days in space, 144 of which were aboard the station.