Americans largely agree that climate change and pollution are real problems. But a new poll reveals that they aren’t interested in shelling out massive amounts from their wallets in pursuit of progressive, big-government “solutions” like the so-called “Green New Deal.”

After all, the Green New Deal would cost taxpayers up to $93 trillion, a truly astounding sum that comes out to nearly $600,000 per US household. Yet most Americans aren’t even willing to sacrifice $50 a month to mitigate climate change. At least, that’s the finding of newly-released polling from the fiscally-conservative Competitive Enterprise Institute (CEI).

CEI surveyed a representative sample of 1,200 registered voters on environmental issues, and their findings have a margin of error of 2.83 percent. A strong majority of respondents said they were somewhat or very concerned about the issue of climate change. However, one of the most interesting follow-up questions was this: “How much of your own money would you be willing to personally spend each month to reduce the impact of climate change?”

The vast majority of voters were only willing to make very minimal financial sacrifices.

“This poll shows once again that Americans are unwilling to pay for the left’s anti-energy policies,” concluded Myron Ebell, the director of CEI’s Center for Energy and Environment.

Indeed it does. And, hopefully, this polling will mean that ultra-expensive, big-government approaches to addressing climate change are taken off the table. From deregulating artificial meat to cutting the red tape blocking emission-free, extremely safe forms of nuclear power, there are plenty of ways to address this issue without digging into Americans’ wallets. 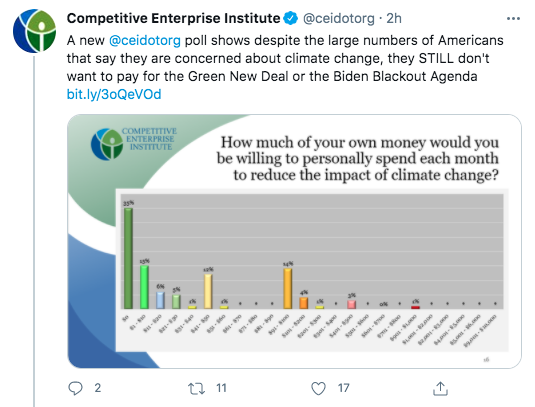 SPC Mark Huddleston
Posted 2 mo ago
I could have told them that but alas reason is rarely something Politicians listen to.
(12)
Comment
(0)

Cpl (Join to see)
2 mo
Modern politicians don't think, much less, listen to their constituents. They emote megadonor feelings. The four digit or less donations don't even put small donors on their radar, but you'll continue to get robo calls and snail mail requests for donations.
(1)
Reply
(0)

SSgt Keith Barrows
Posted 2 mo ago
Politicians hard at work representing us and what we want - NOT!
(10)
Comment
(0)

Maj Robert Thornton
2 mo
They wish to rule, they forgot what representing is.
(4)
Reply
(0)

Cpl Vic Burk
2 mo
GySgt Thomas Vick - And you know how to tell if they are lying, their mouth is moving.
(2)
Reply
(0)

LTC John Griscom
Posted 2 mo ago
I am convinced the "scientists" pushing the government climate change agenda only do so to continue to get government grants.
(8)
Comment
(0)