SFC James J. Palmer IV aka "JP4"
315
133
47
12
12
0
I find this subject fascinating. According to Wikipedia 49 of 50 states have at least some form of Stand Your Ground. Vermont and D.C. have a duty to retreat meaning no matter where you are, your duty is to retreat until you are at a point to where you cannot retreat anymore, even in your own home. At least that is my interpretation.

With all that is going on in the world, knowing applicable laws and what they mean is a great idea for new gun owners like myself. I have no intention of ever having to use it on somebody except for in defense of my family.

According to the text from Wikipedia....

The states that have adopted stand-your-ground in practice, either through case law/precedent, jury instructions or by other means, are California, Colorado, Illinois, New Mexico, Oregon, Virginia, and Washington.

States that have adopted stand-your-ground, but limit it to only when a person is within their vehicle, are North Dakota, Ohio, and Wisconsin.

The states that have castle doctrine only with the duty to retreat in public are Arkansas, Connecticut, Delaware, Maine, Maryland, Massachusetts, Minnesota, Nebraska, New York, New Jersey, and Rhode Island. This means that people can use deadly force in their home, car, or other form of abode but have to retreat in public.

Vermont and Washington, D.C. require citizens to flee from criminal assailants, even within their own homes. 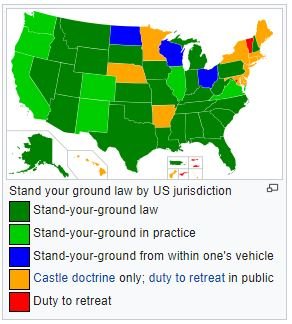 CPL Douglas Chrysler
Posted 1 mo ago
It's a little difficult for a 90 year old to retreat from a 20 year old.
(10)
Comment
(0)
show previous comments

CPL Douglas Chrysler
1 mo
A1C (Join to see) I find it hard to understand what defense any lawyer could offer.
(2)
Reply
(0)

SPC Mark Huddleston
1 mo
I agree. Old saying most have heard already maybe some haven't "It is better to be judged by 12 than carried by 6!"
(3)
Reply
(0)

CPL Douglas Chrysler
1 mo
A1C (Join to see) It's like they're afraid someday they might be on death row so they want it banned.
(2)
Reply
(0)

TSgt George Rodriguez
1 mo
I'm 75 and after I present my gun aimed at them they have a choice to turn around and run or continue to be aggressive and die right there. I'm too slow to run and too old to take an ass whoopin. And when there's 2 or more I'm outnumbered.
(1)
Reply
(0)

A1C (Join to see)
1 mo
Mentioned it before but customizing and adding military bling to your weapons can bite you in the a**. A zealous prosecutor can hold up your modified weapon with all the gadgets and picatinny add ons as well as a "Kill em all sticker" and wave it in front of the jury portraying you as a blood thirsty nut. This is taught often in CC & Self defense classes. One snarky comment that I loved is to avoid this, Paint the weapon pink, put unicorns, glitter and girly bling on it and some Hannah Montana stickers on. (Believe it or not I have seen pink pistols at gun shows so not as crazy as it seems)
(0)
Reply
(0)

SGT Steve McFarland
Posted 1 mo ago
When Oklahoma adopted it, it was often known as the "make my day" law. How it actually works is dependent on the situation and jurisdiction.
(7)
Comment
(0)
show previous comments

TSgt George Rodriguez
1 mo
Oklahoma's Stand your ground law states that a person who is not engaged in an unlawful activity and who is attacked in any other place where he or she has a right to be has no duty to retreat and has the right to stand his or her ground and meet force with force including deadly force if he or she reasonably fear of imminent peril of death or great bodily harm.
Make my day law allows the use of deadly force by individuals who have a reasonable fear of imminent peril of death or great bodily harm after someone illegally enters their business or home.
What this means is that a 300 lb 6'2 21 year old jumps up and threatens to beat you to a pulp and rushes towards you with every attempt to accomplish it you may use whatever force you deam necessary to save your self.
(2)
Reply
(0)

SPC Mark Huddleston
1 mo
I like it and "Well do ya punk?"
(2)
Reply
(0)
Show More Comments
Read This Next
RallyPoint Home