This is the first black graduate of the US Naval Academy

"This is the first black graduate of the US Naval Academy

The military has traditionally been the most progressive institution in the United States. In 1948, long before the Civil Rights Movement swept America, the U.S. military had already begun to integrate. But that doesn't mean the changes came quick or easy, especially for Wesley A. Brown, the first African-American to graduate from the Naval Academy in Annapolis.

Brown started classes at the academy in 1945, three years before President Truman ordered the military to stop separating black and white troops. Five men came before Brown as Midshipmen and were chased out of the academy altogether. Brown was the first to make it to graduation day – and he did it with a flourish.

Brown was a Washington, D.C. native who grew up as a voracious reader, and was particularly interested in the history and heritage of African-Americans in the United States. He would work after school as a mailman at the Navy Department before he was nominated to attend the Naval Academy by New York Congressman Adam Clayton Powell, Jr. Life at Annapolis was hard at first. Many did not accept him, and he was loaded down with undeserved demerits that almost found him drummed out.

"I get asked that question often, 'Did you ever think about quitting?'" Brown said in a 2005 Baltimore Sun interview. "And I say, 'Every single day.' When I came to the academy I learned that there were all kinds of prejudices against Jews, Catholics, even the Irish and I looked around and thought that these prejudices were instilled in them by their families, and they could not be blamed for feeling the way they did."

But he persevered and actually found that many more of his fellow Mids supported him. One of his most ardent supporters was a fellow track teammate, the son of a Georgia peanut farmer named Jimmy Carter.

Brown graduated from the Naval Academy in 1949 joining the Navy's civil engineering corps. He created infrastructure in the Navy's most important postings from the Philippines and Hawaii to Cuba, and even Antarctica. For 20 years, Brown was an important officer in the service, even seeing action in Korea and Vietnam. He retired in 1969 and became a faculty member at Howard University, in his hometown of Washington, D.C.

The Seabee retired with the rank of Lieutenant Commander.

To honor his achievements and his history as a USNA athlete, the academy dedicated its newest athletic facility in 2008 as the Wesley A. Brown Field House. Brown was on hand at the ceremony to mark the construction of the facility that would bear his name, decades after racism and prejudice nearly cost him his illustrious career. Brown died in 2012." 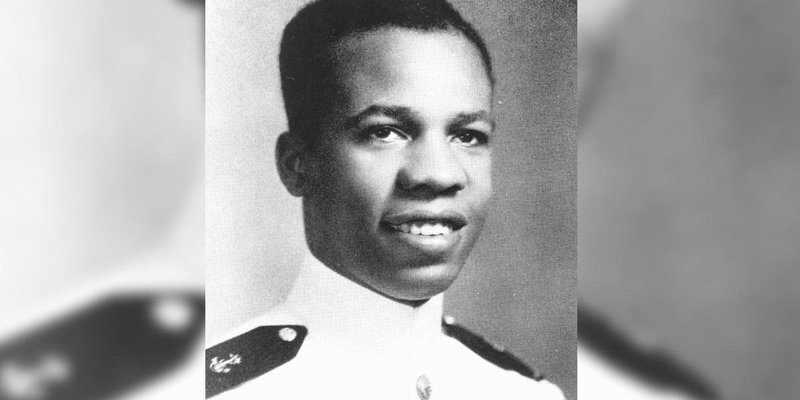 This is the first black graduate of the US Naval Academy