Should Plate Carriers and Mich Helmets be the Standard issue body Armor for Combat Arms? 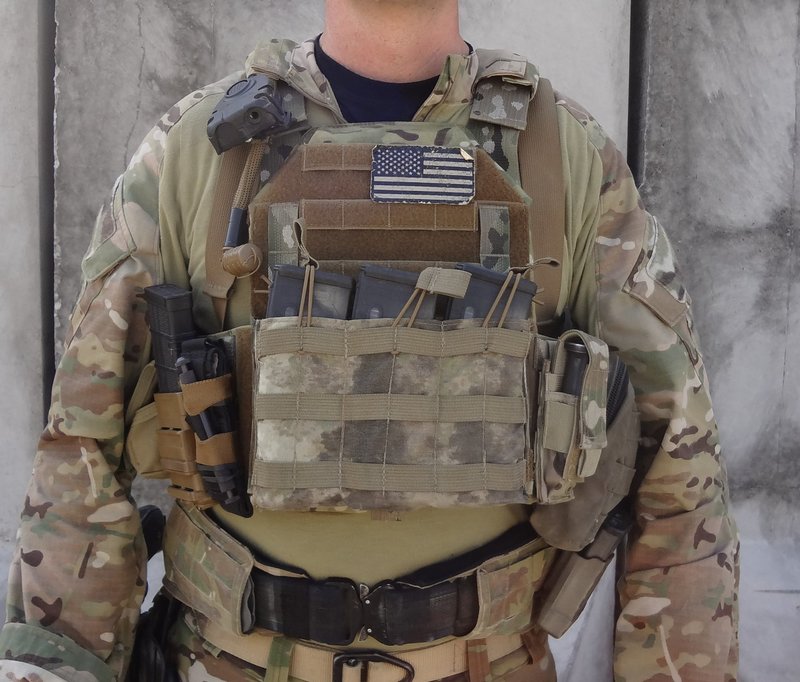 With todays Gear Sets and weight of combat loads, we should look at more practical Armor, what are your thoughts
Posted in these groups:

So in closing I would say that the matter of "practical" body armor is not one that can be simply addressed by saying make it lighter. The practical solution is the one that will keep the most important asset we have "the fighting men and women" of this country alive to fight another day.
(5)
Comment
(0)

SSG Dennis Grossmann
>1 y
The body armor is designed for blasts also. If the upward shrapnel weren't a factor, then Dragon scale armor would be a great weight reducer.
(0)
Reply
(0)

LTC Marc King
>1 y
SSG Grossmann: Let me offer some additional thoughts. As I said in my earlier reply the body armor that is currently being worn by DoD personnel is not tested for blast as part of its qualification process. It turns out that it has performed well, in some cases, when subjected to IED events in the field and I have photos of shrapnel protruding from the ceramic plate which would have caused a catastrophic injury had it not stopped the projectile. The soldier wearing it sent the photo along with a "Thank You" note. Also, we know from all of the medical data that has been collected that if we can prevent any penetration of the upper body organs it is a better then a 90% probability that the soldier will survive any other wounds received on the battlefield. Hence the truly low number of KIAs and the very large number of WIAs in the current theaters.
On the subject of Dragon Skin (not Dragon Scale) I can offer this. It was tested to its limits by both the Department of the Army and the Department of Defense with the same conclusion reached. Despite the hype from the manufacturer it was 1. Not lighter and; 2. it failed to meet the protection levels required to defeat the current armor piercing bullet threat when compared to a monolithic ceramic plate. The testing had nothing to do with shrapnel in an upward trajectory. More "war story" stuff because there is, as previously stated, no testing for blast. While Dragon Skin showed some potential for lower level threats it failed a number of the environmental test as well as ballistic testing for more lethal threat required of all body armor and was subsequently recalled by the USAF and it was banned by the USMC. Trust me on this one... if you check my creds on RP you will see that I'm the guy that led Ceradyne Armor Systems, Inc., supplying about 80% of all the body armor that is currently used by all DoD components. As for Dragon Skin... I also supplied the key component for the manufacturer, the ceramic disks that gave it the "scaled" appearance. Making both was a good gig but the Dragon Skin concept, like many other prosed solutions just did not work out. On the other hand the current ESAPI plate which has been in the field since 2005 has saved thousand of lives on the battle field a record we are enormously proud of. One of my regrets is that we did not have this technology in Viet Nam... so more of my soldier could have also come home.
(1)
Reply
(0)

CSM (Join to see)
Posted >1 y ago
Yes we should be looking at ways to reduce combat loads! The injuries sustained from long-term use of heavy loads costs money in disability payments at the end of military careers. If we spent just a portion of that money up front to reduce combat loads, there would be less injuries. I wrote about Human Universal Load Carrier (HULC) back in 2011. From their website, "Dismounted warfighters often carry heavy combat loads that increase the stress on the body leading to potential injuries. With a HULC exoskeleton, these heavy loads are transferred to the ground through powered titanium legs without loss of mobility."
(5)
Comment
(0)

SSG (Join to see)
>1 y
Thank you CSM, I felt like a human Hesco Barrier with limited mobility
(0)
Reply
(0)

SFC David Davenport
Posted >1 y ago
Honestly the real answer is you should get the piece of equipment that best meets your needs for your assigned mission. I personally preferred a plate carrier for what I was doing while deployed. It was a better choice and kept my dismounted combat load down to about 84 lbs. of gear. For someone on a more mobile mission using vehicles a higher percentage of time the IOTV likely would have been a better choice. To be blunt the choice of one or the other with no context is not good question in my opinion.
(4)
Comment
(0)
Show More Comments
Read This Next
RallyPoint Home