BREAKING NEWS:
*Democrats to Introduce Articles of Impeachment on Monday - Democratic Aides
*Articles to Focus on Capitol Breach, Accuse President Trump of Incitement of Insurrection
*House Leadership Has Yet to Schedule a Vote on the Articles
Earlier:

WASHINGTON—House Speaker Nancy Pelosi said Friday that Democrats would move forward with impeachment proceedings if President Trump didn’t quickly leave office, adding that she spoke with the Joint Chiefs of Staff chairman about Mr. Trump’s mental fitness after he encouraged a mob that later stormed the Capitol.

“If the president does not leave office imminently and willingly, the Congress will proceed with our action,” Mrs. Pelosi said in a letter to House Democrats on Friday.

Democratic lawmakers are pushing to reconvene the House next week to vote on such a measure and send articles of impeachment to the Senate. She has pushed Vice President Mike Pence to remove the president with the cabinet by using the 25th Amendment. Mrs. Pelosi told Democrats that is the route she wants to see first.

The House speaker also questioned Mr. Trump’s fitness for office in the letter, saying she had spoken to the Chairman of the Joint Chiefs of Staff Army Gen. Mark Milley on Friday “to discuss available precautions for preventing an unstable president from initiating military hostilities or accessing the launch codes and ordering a nuclear strike.”

“We must do everything that we can to protect the American people from his unbalanced assault on our country and our democracy,” wrote Mrs. Pelosi, who didn’t say in the letter how Gen. Milley had responded.

The Pentagon’s Joint Staff acknowledged the call Friday but provided no details.

“Speaker Pelosi initiated a call with the chairman,” said Col. Dave Butler, a spokesman for Gen. Milley. “He answered her questions regarding the process of nuclear command authority.”

The White House didn’t immediately respond to a request for comment on Mrs. Pelosi’s comments.

Mr. Trump acknowledged his election loss and promised an orderly transition on Thursday, after facing criticism from Democrats and Republicans for encouraging the riot and not doing enough to stop it.

But he also said Friday he would not attend President-elect Joe Biden’s Jan. 20 inauguration and continued to send messages of support to his voters, praising the “75,000,000 great American Patriots who voted for me.”

A presidential impeachment in such a short time frame would be unprecedented. The House would have to end its recess and reconvene and then vote on articles, in order to act quickly. It would need to pass with a simple majority vote, and then the articles would be sent to the Senate, triggering an automatic trial to start at 1 p.m. the next day. It would require a two-thirds majority vote in the Senate to remove Mr. Trump from office.

Mrs. Pelosi told Democrats she had a call scheduled with Mr. Biden Friday to discuss the riot at the Capitol and Democrats’ desire to remove Mr. Trump from office, according to two people familiar with the matter.

Hundreds of rioters, pushing past security barriers and Capitol Police officers, breached the Capitol on Wednesday afternoon as both the House and Senate were meeting inside, forcing the evacuation of some lawmakers, while others barricaded themselves against the crowds. The riot followed a rally where the president urged supporters to head to the Capitol and “fight.”

Democrats have been amplifying their calls to remove Mr. Trump from office since the riot, with more than 130 Democrats signing on to articles of impeachment. The proposed articles focus on both the president praising rioters who stormed the Capitol on Wednesday and the president’s call to Georgia election officials to interfere in the election.

“This conduct is so grave and this president presents such a clear and present danger to our democracy, I don’t think you can simply say let’s just wait it out,” said Rep. David Cicilline, who helped write the articles.

House Majority Whip James Clyburn (D., S.C.) said on CNN that there are enough votes in the House to impeach the president, who is slated to leave office on Jan. 20. Democrats say the president violated his oath of office by encouraging a mob that stormed the Capitol, putting the lives of members of Congress and those that work in the complex at risk.

After a day of crisis for his administration, Mr. Trump posted a video on Twitter Thursday night, saying he was outraged by the “lawlessness and mayhem” at the Capitol, adding that “tempers must be cooled,” though he took no responsibility for the riot. He said a new administration would be ushered in on Jan. 20 and promised an orderly transition, though he did not mention Mr. Biden by name.

On Friday, Mr. Trump wrote on Twitter: “To all of those who have asked, I will not be going to the Inauguration on January 20th.” As part of the transition process, outgoing presidents traditionally attend their successor’s inauguration, as former President Barack Obama attended Mr. Trump’s.

In an earlier tweet on Friday, Mr. Trump said his political movement would continue. “The 75,000,000 great American Patriots who voted for me, AMERICA FIRST, and MAKE AMERICA GREAT AGAIN, will have a GIANT VOICE long into the future,” Mr. Trump tweeted. “They will not be disrespected or treated unfairly in any way, shape or form!!!”

His Thursday statement sought to manage the fallout from the riot. Transportation Secretary Elaine Chao and Education Secretary Betsy DeVos said they were resigning their posts, the latest in a stream of resignations.

Joining the chorus of criticism from within his own party, former White House communications director Alyssa Farah said on CNN Friday that Mr. Trump lied to the public about the election results. She said the president should “seriously consider” resigning.

While many Republicans have heavily criticized Mr. Trump’s actions, it wasn’t clear how much support there would be among GOP lawmakers for impeachment.

Neither Mr. Pence nor any cabinet members have expressed support for using the 25th Amendment to remove Mr. Trump.

House Democrats passed two articles of impeachment against the president in December 2019, over Mr. Trump seeking to withhold aid to Ukraine while he was pressing the country to investigate Mr. Biden, then a Democratic presidential candidate, and his son. Mr. Trump was later acquitted by the Senate.

More than 60 lawmakers asked leadership on Friday in a letter to reconvene the House which is supposed to be in recess until the inauguration in order to censure the president, take action on domestic terrorism, or pass articles of impeachment. Lawmakers want to be able to introduce a privileged resolution, which would bypass the committee process and allow the articles to go straight to the floor for a vote.

On a private call with House Democrats on Friday, Intelligence Committee Chairman Adam Schiff (D., Calif.), who managed the president’s previous impeachment trial, outlined the impeachment process and said that it is important to be on the same page as Mr. Biden, according to people familiar with the call. Not every House Democrat favored moving to impeachment. Rep. Kurt Schrader (D., Ore.) compared a rushed impeachment to a “lynching” and said it would not give the president due process, according to a person on the call.

In the Senate, even some of the most centrist Democrats said it was time for Mr. Trump to leave, or be removed from office.

“I would support anything that could remove him between now and Jan. 20,” Sen. Joe Manchin (D., W.Va.) said Friday. “If he is not president for the next 12 days, I think our country would be safer.” Mr. Manchin said the 25th Amendment would be the fastest way for Mr. Trump to leave the White House.

While impeachment wouldn’t be “a walk in the park,” he said, “there’s never been a more blatant crime than what we saw committed to our wonderful country than what the president has done.”

One Senate Republican said he would consider impeachment. On CBS, Sen. Ben Sasse (R., Neb.) said: “The House if they come together and have a process I will definitely consider whatever articles they might move.”

Sen. Lindsey Graham (R., S.C.) said that it is time to heal and move on, not move forward on impeachment.

“It will do more harm than good,” he said on Twitter. “I’m hopeful President-elect Biden sees the damage that would be done from such action.”

—Kristina Peterson contributed to this article. 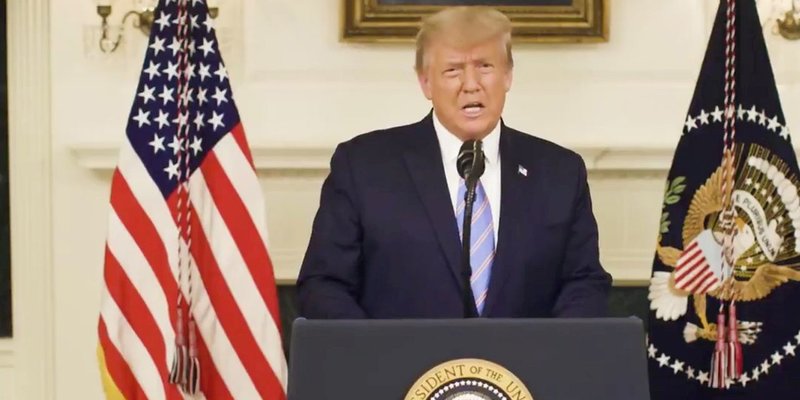 SGT Lou Meza
Posted 3 mo ago
probably be better just to give trump a new set of golf clubs and let go play for the next few days until his term is over .
(2)
Comment
(0)

SGT Edward Wilcox
Posted 3 mo ago
Not sure what good that will do. McConnell is still in charge until the new Congress is seated, and by then it will be too late.
(2)
Comment
(0)
show previous comments

TSgt Denise Moody
3 mo
If impeached, and convicted, it would result in trump's "disqualification to hold and enjoy any office of honor, trust or profit under the United States:..." That makes it worth it. And the impeachment can't be pardoned.
(2)
Reply
(0)

Capt Gregory Prickett
3 mo
SGT Edward Wilcox - the new Congress is already seated. As soon as the votes in Georgia are certified, the two new Senators will be sworn, and the Democrats will elect Sen. Schumer as Majority Leader. It could change during the next week.

Maj John Bell
3 mo
This is about two things. Barring President Trump from another run in 2024 as others as others have spelled out before me. AND hoping that they will have a political knife in hand in 2022. In the 2022 election cycle they will use the impeachment vote and any trial vote in the Senate as a tool to try and purge the House and Senate of Trump supporters.

The party of unity is morphing into the party of vengeance.
(1)
Reply
(0)

Cpl Sean Fitzgerald
3 mo
Because they are seeking to add the extra clause in the Impeachment that he may never again hold an Elected Federal office, there is a process to continue the impeachment past the Inauguration
(1)
Reply
(0)

Cpl Benjamin Long
Posted 3 mo ago
It's of no concern... They waste time trying to meet nonexistent goal... This effort is DOA....
(1)
Comment
(0)
Show More Comments
Read This Next
RallyPoint Home