"US military morale is reportedly at 'rock bottom' again" 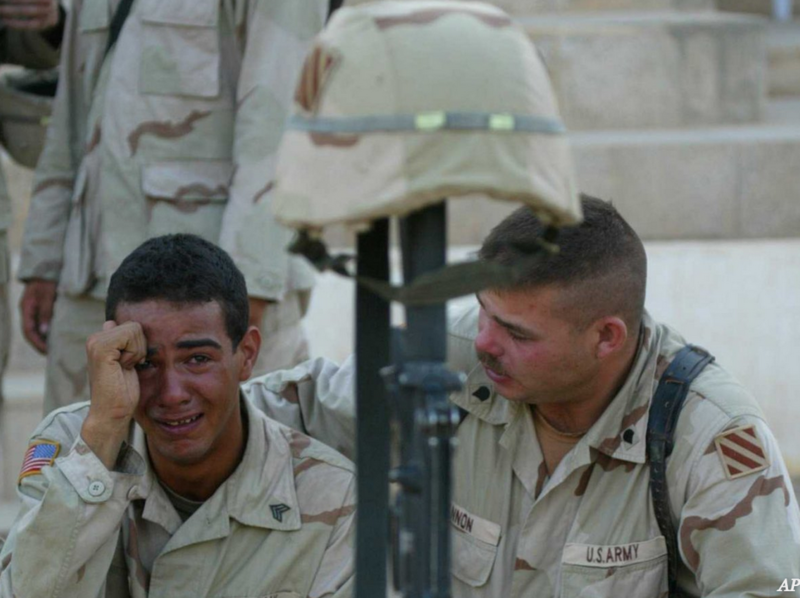 From: Business Insider
--
Since 2009, $287 million has been spent on programs aimed at improving morale within the US military, which has shouldered two major overseas combat deployments over the past decade.

But these efforts may have been largely fruitless, as 52% of soldiers across all branches remain "pessimistic about their future in the military," according to an April USA Today report.

For decades, analysts have consistently reported on supposedly declining US military morale, even before the wars in Iraq and Afghanistan.

A Brookings Institution report notes: "Observers regularly fretted over low morale during the defense drawdown of the 1990s, during the start of the Iraq War, during the Iraq Surge, during the Afghanistan Surge; and at practically all the points in between ... After each report of troop morale hitting 'rock bottom,' troop morale seems to slip lower yet and, still, the military soldiers on."

In the past, flagging morale may have been attributable to factors like repeated Iraq or Afghanistan deployments.

But a 2014 Military Times study suggests a financial cause for flagging morale: "In 2009, 87 percent of active-duty troops who participated in Military Times' survey rated their pay and allowances 'good' or 'excellent,'" the newspaper reported. "This year, the figure was just 44 percent."

Few of the soldiers polled believed their situation would improve: 70 percent of those Military Times surveyed said that they expected quality of life under military employment to decrease further in the future.

Pay and benefits aren't the only cause of pessimism in the ranks. Some in the military worry that the the armed forces aren't being adequately led into the future, and declining morale could signal a general lack of confidence in the military's leadership.

MSNBC reports that in 2011 "only 26 percent of Army leaders who participated agreed with the statement that the Army 'is headed in the right direction to prepare for the challenges of the next 10 years.'"

According to the Military Times, only 27 percent of soldiers thought that leadership had their best interests at heart.

President Obama is unpopular with the armed forces as well, though some of his administration's policies have gained support over the years.

A separate Military Times poll found Obama's popularity at a dismal 15 percent among soldiers in 2014. Morale is bound to decline if soldiers don't believe in their commander-in-chief.

But there's also information in the poll suggesting that that low number actually underestimates the president's approval among military personnel: in the last 5 years, approval for some of Obama's military policies, like ending Don't Ask Don't Tell and opening combat units to women, have gained support, seeing a 30 percent rise in popularity.

There's another possible reason for drooping morale, especially among soldiers who fought in either Iraq or Afghanistan: It may be hard for some military personnel to see their work as effectual while ISIS becomes a deadly and rising force throughout the Middle East.

Whether it's because of stagnant pay, stale leadership, Obama's supposed unpopularity, or the state of global geopolitics, the US military may have a very challenging problem on its hands.

http://www.businessinsider.com/us-military-morale-at-rock-bottom-and-sinking-further-2015-6#ixzz3egLPoREu
Posted in these groups:

SFC(P) Aaron Fore
Posted >1 y ago
Our benefits are constantly cut back, to include retirement which gives us little desire to stay. World travel use to be a perk but now it has dwindled to almost nothing. The draw down has taught us that we are dispensable. The massive on line mandatory training is seen for what it is, a CYA for the government. There seems to be more emphasis for all the HRO functions rather than war fighting functions. Too many senior leaders that have forgotten that the troops should be their priority and finally, take a look at the media propagating the division of America into all the various special interest groups which seemingly has all the political powers in DC in their hands. We are struggling to remember an Army and an America that is worth serving.
(16)
Comment
(1)
show previous comments

SFC(P) Aaron Fore
>1 y
Cpl Toby Dodd,
You wrote your comments as though you presume to know me or my service, please allow me you bring you a bit closer to that end.
I have served over 30 years for this great nation, I served behind the Iron Curtain during the cold war standing up against the forces arrayed against us, while you were possibly still in middle school. I have also served with the National Guard where I put my civilian life on hold to rescue 2500 Americans after back to back hurricanes, A short time latter I was called up and deployed for a 22 month stint which effectively caused the business I started to close which I could not recover upon my return, which is fine because in less than a year I was deployed again and since returned to active duty. I have been blown- up by at least 5 direct hits from IED’s, lost friends and comrades and my business.
As you can see, I have served, protected, defended this nation and my brothers and sisters at arms and continue to do so. I have honored my commitment and I expect those who made a commitment to me honor their part as well.
Your comment about me being in the Army as opposed to the Marines meaning that my service is less than yours will simply have to go in the category, “Really?” .
(2)
Reply
(0)

Cpl Toby Dodd
>1 y
Not wasting my time reading your replies in depth. Fore, I don't have to presume or assume or guess anything. Reading what you wrote says it all. Again, if join my military for any other reason besides what the sole purpose of being in the military is about, you don't belong in the military. The 3 of you...your dreamland, unicorns and rainbows type of talk as if you joined a fortune 500 company is weak. Reach down and grab a hold or get out.

SGT (Join to see)
>1 y
I know this is a few years late to the game, but it the topic just popped up in my feed.
I have have to say, having read through this exchange a few times, I can’t help but laugh.

Cpl Toby Dodd , a supply clerk in the Marines, who doesn’t appear to have deployed (the very embodiment of a remf, pog, etc) starts spouting about defending and dying and of course, alluding to the mythical higher standards of the Corps. Despite having no practical knowledge on the topics. He had time to waste trolling through FB to get to RP, but then won’t waste his time to read through a response. Then signs off “Marine”. Classic. Honestly, however unintentioned it may have been, that was Duffleblog-caliber level of humor. “Marine”. Good lord.

SFC(P) Aaron Fore I agree most with “Too many senior leaders that have forgotten that the troops should be their priority.” I certainly hope that changes as the years move on.

SSG Joe McFarlan
>1 y
I agree completely. The photo showing the Spc in question, however, is an old one. I remember getting my DCU's in bulk and having to rip off all the 3ID PATCHES, and seeing them all back in by hand the correct way. So, it may not be his fault... If he were wearing ACU's it would be a different story.
(1)
Reply
(0)

COL Charles Williams
Posted >1 y ago
LTC Stephen F. I don't buy it. I would that anytime we go through a downsizing, on the hells of extremely high OPTEMPO, that morale will suffer. I think the main thing impacting morale is the downsizing, which slows promotions and opportunities and causes Soldiers to lose their jobs.
(4)
Comment
(0)

LTC Stephen F.
>1 y
COL Charles Williams, I think you are commenting on my post which started out "Not surprising given the current state of affairs - potential RIF," I listed in priority order what I expected would be influencing morale over the near term. Therefore I think we violently concur that downsizing [i.e. RIF] is the biggest morale buster.
That being said, I am certain the article is based on a sample that the Brookings Institute "took" after developing questions, identifying target and control groups, querying the groups and analyzing the results.
We both know that Soldiers, Sailors, Marines, and Airmen generally do the best they can whether fully resourced or less than fully resourced.
We can only hope that when the RIF comes for once it will be well thought thru in terms of what skills will be needed in the near to mid term and do there best to keep and retrain as necessary as many as they can to reduce the turmoil to service members and their families AND reduce risk to our defense posture and capabilities.
(1)
Reply
(0)