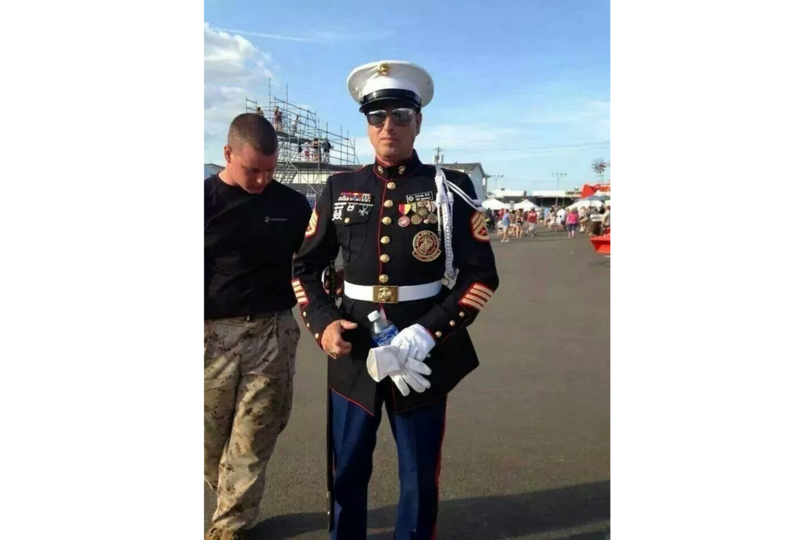 From: Guardian of Valor

We posted this photo awhile back after several Marines sent it to us, they confronted this man at the fair and found out he was a fake. The real Marines were running a recruiting booth at the fair in Erie county.

Well Michael was recently arrested on several charges, including Impersonating a Marine, which is a law in the State of New York.

Schrenk had never served in the United States Marine Corps nor was he a sworn member of the DOD Police Department.

A search warrant was executed by members of the New York State Police and West Seneca Police Department that revealed numerous items related to the investigation. Schrenk was arraigned in front of Hamburg Town Justice Walter Rooth and released on his own recognizance and subsequently arraigned in front of West Seneca Town Justice Dale McCabe, who also released Schrenk on his own recognizance. Schrenk is scheduled to re-appear in West Seneca Court on Friday October 17, 2014 at 9AM and again in Hamburg on October 30, 2014.

The public is encouraged to report any previous incidents of a similar nature involving Mr. Schrenk to the New York State Police at SP Clarence at [login to see] .

Some states have strict laws when it comes to this, a lot of other states are slowly jumping on board with laws to protect the uniforms and awards.

http://guardianofvalor.com/michael-r-schrenk-fake-marine-found-erie-county-fair-arrested/
Posted in these groups:

PO1 Sojourner "Chancy" Phillips
Posted 5 y ago
Idiot! Have you ever noticed that these scumbags always have a ridiculous amount of medal ribbons and badges on their uniforms" It is like wearing a sign that says "Fake!" I am glad NY has a law and can legally do something about this.
(28)
Comment
(0)
show previous comments

CPO John Magill
5 y
Today my dress white chokers as we call them, would do just that, choke the life out of me. Gained so much weight since I got outs its not even funny. I cant get any of my old uniform items on anymore. Good thing these Marines were on the ball, and caught this jack wagon.
(1)
Reply
(0)

SCPO David Lockwood
Posted 5 y ago
Hope more arrests are made throughout the remaining states and put an end to Stolen Valor.
(14)
Comment
(0)

MSgt Oscar Grisson
Posted 5 y ago
I don't know why people insist on impersonating a military member...because you are going to get caught by a military member that is not in uniform!
(10)
Comment
(0)

CPO John Magill
5 y
Guess they don't realize how many of us there actually are.
(0)
Reply
(0)
Show More Comments
Read This Next
RallyPoint Home