LTC Stephen F.
78.7K
2.31K
366
208
208
0
Everybody who has spent time on a military installation has heard bugle calls - either by an actual bugler or a recorded bugle call. Some calls woke us up [First Call]; accompanied the raising of the National Colors [Reveille]; told us it was time to eat [Mess Call]; announced the retiring of the National Colors [Retreat]; told us to turn to out the lights in squad rooms of old [Tattoo]; told us to go back to our rooms [Call to Quarters]; and go to sleep (Taps) or remember the recently departed.
Many bases, posts, camps and stations only used some of these bugle calls each day; but, a few used many or most - especially West Point in my experience. Those of us who spent time on Parade fields heard Assembly, Attention and Adjutant's Call played many times. I can't remember if a bugle call coincided with the Commander's command to initiate pass in review.
The U.S. Army Music hyperlink includes each bugle call.
How did the bugle calls affect you? Did you enjoy them or did you do your best to be inside when they were played?
http://www.music.army.mil/music/buglecalls/
Posted in these groups:

SFC (Join to see)
Posted >1 y ago
I am going to say Taps, because no matter where you are, it makes you stop and reflect on those who paid the price for our freedom.
(52)
Comment
(0)
show previous comments

SPC Michael Duricko, Ph.D
2 mo
Sgt David G Duchesneau
Thank you for the link to your book. I was also there during the Tet "66 to '67 fighting with the Korean Special Forces in an Attack Helicopter Group in some insane situations and although I wasn't able to open the link I will find and read your book my Brother because we may have been in some battles together and never knew it. God Bless you, welcome home and I salute you and your bravery.
(0)
Reply
(0) 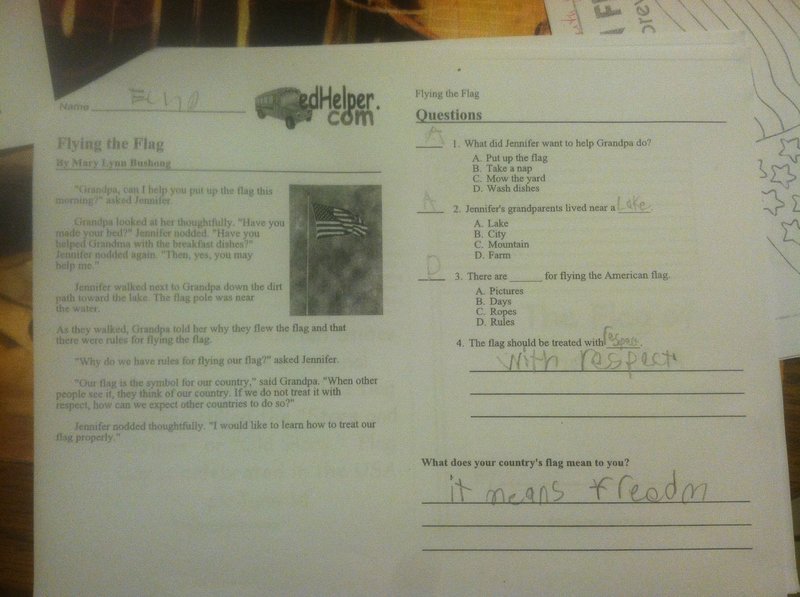 LTC Stephen F. I'm not gonna lie I am about to sound really "Pro Navy/Pro Military" right now but, I live in base housing and one of the things I love the most is hearing Reveille and Taps going off every morning and evening.  Hearing the formations singing cadence during group runs.  Well these things fill me full of pride and make my heart swell.  The greatest part is my children are raised around it and know how to respect it.

Respect starts at home and when I have family come visit, I love explaining to them what Reveille and Taps is and why it is so important.   Photo comment: This is actual homework that my daughter did. If a 7 year can get it why can't grow adults?
(45)
Comment
(0)
show previous comments

PO2 David Dunlap
2 y
PO1 (Join to see) - A big percentage of our Bible Study are veterans..so not much chance of losing that commaradery a band of brothers are brothers whether vets, law enforcement or Christian brothers...imho!!
(2)
Reply
(0)

1LT Peter Duston
1 mo
You will see from my profile photo that I am a Army bugler and as a 82 year old uniformed bugler, I am attached as a retiree to the Maine USAF Honor Guard and as a volunteer, sound Taps at Army, USMC, Navy and USCG funerals as well. I have done hundreds as well as at other events. When I was a 12 year old scout, my trumpet teacher taught me Taps so I could become my Troop Bugler. I still have that patch on my Scoutmaster uniform and teach young scouts Bugling Merit Badge in an effort to keep bugling live. My music teacher was called up for the Korean War and went missing 70 years ago next month when his unit was overrun by the Chinese Communists. He never returned. As I have sounded Taps over the years, I remember SGT Gerry Scott who lives in an unknown grave somewhere in Korea. Several years ago, when my wife and I were visiting Korea, with the help of several Korean officers, a friend and declassified battle maps, we located the actual capture site, held a small memorial program with a small US and MIA Flag provided by Wreaths Across America. We buried a POW Medal in one of the old fighting positions accompanied by Taps by the Arlington Bugler on an I-phone. RIP: Gerry Scott.
There are words associates with Taps. I sang these every night in my evening prayer for the 7 months I hiked the Appalachian Trail to remember our war dead and missing.
Day is done, Gone the sun, From the fields, From the hills, From the sky, All is well, Safely rest, God is nigh!
(0)
Reply
(0)

Capt (Join to see)
Posted >1 y ago
TAPS without a doubt. However, there are certainly times when I wish I were not hearing it.
(35)
Comment
(0)
show previous comments

1SG John Millan
10 mo
My fave for motivation is CHARGE! My fave for sentiment is taps.
(0)
Reply
(0)

PO2 David Dunlap
4 mo
LTC Stephen F. - Taps brings tears to my eyes...for all those that have given their lives and those wounded for America...and greater disgust for the SCUM in the dumocrap party that are trying to destroy this country..hang them, soros, gates, pelosi, biden, schumer, waters, schiff wittmer, nusome and especially the clintons....and may they rest in ???
(1)
Reply
(0)

Robin Williams as the American Flag

http://www.pfaw.org Robin Williams portrays the American flag in "I Love Liberty," a two-hour television special created by Norman Lear and presented by Peop...

SMSgt Bob Wilson
4 mo
The question got me to thinking. Personally, I don't care for it. The different branches of the military utilize the bugle calls for retreat. Most of the other calls are used based on the service branch. Yes, it is nostalgic and has special meaning; however, it needs to go the way of the horse and caisson. Funerals, OK; however, now at the last "military funeral" I attended, "Taps" came from a recording played from a "boom box".
(0)
Reply
(0)
Show More Comments
Read This Next
RallyPoint Home