I have a slightly different musical treat for those who either don't know what classical music is or have a strong liking for it... Well, this song is not a true classical piece, but is an instrumental.

For your viewing and listening pleasure, I recommend Full Screen & Sound up!

Enjoy!
Posted in these groups: 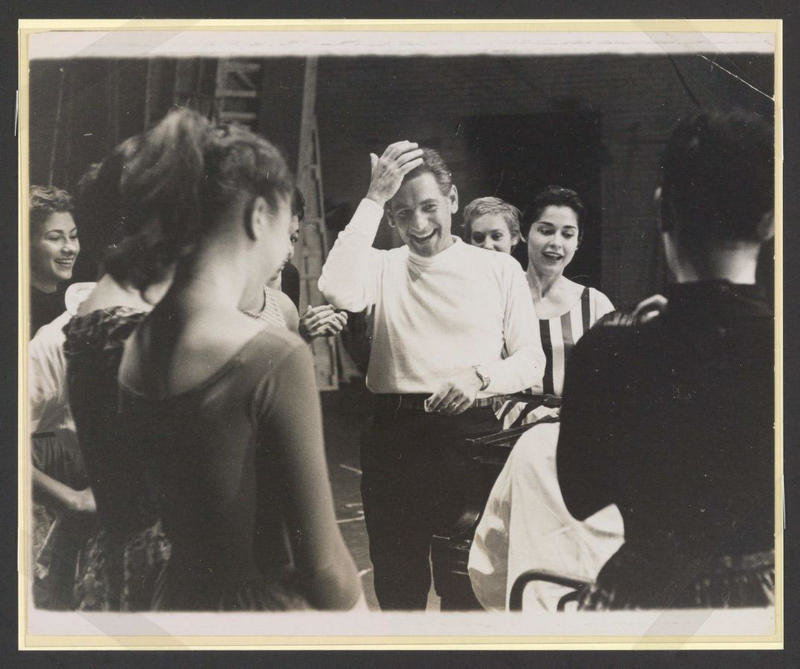 Thank you, my friend Sgt (Join to see) for posting the music video of Hauser and Caroline Campbell performing "America" from West Side Story by Stephen Sondheim who wrote the lyrics.

Image: Leonard Bernstein backstage with the cast of West Side Story, 1957

America lyrics written by Stephen Sondheim and Leonard Bernstein composed the music in 1956
[ANITA]
Puerto Rico
My heart's devotion
Let it sink back in the ocean
Always the hurricanes blowing
Always the population growing
And the money owing
And the sunlight streaming
And the natives steaming
I like the island Manhattan
Smoke on your pipe
And put that in!

[BERNARDO]
For a small fee in America

[ANITA]
Buying on credit is so nice

[BERNARDO]
One look at us and they charge twice

[ROSALIA]
I have my own washing machine

[INDIO]
What will you have though to keep clean?

[BOYS]
Twelve in a room in America

[BERNARDO]
Lots of doors slamming in our face

[ANITA]
I'll get a terrace apartment

[BERNARDO]
Better get rid of your accent

[ANITA]
Life can be bright in America

[BOYS]
If you can fight in America

[GIRLS]
Life is all right in America

[BOYS]
If you're all white in America

[GIRLS]
Here you are free and you have pride

[BOYS]
Long as you stay on your own side

[GIRLS]
Free to be anything you choose

[ANITA]
You forget I'm in America

[BERNARDO]
I think I'll go back to San Juan

[BERNARDO]
Everyone there will give big cheer!

[ANITA]
Everyone there will have moved here"

Background from
"Conceived in 1949, West Side Story has a serious message that pleads for racial tolerance, delivered in unforgettable song and dance. People have been listening to that message, and humming the songs, ever since the show premiered on Broadway in 1957 and debuted on the silver screen in 1961.

Composer Leonard Bernstein and his co-creators, Jerome Robbins (director, choreographer and original idea-man) Arthur Laurents (who wrote the book) and Stephen Sondheim (lyricist) aimed for lofty ideals in the show’s themes and every detail of its production. But West Side Story, winner of two Tony and 10 Academy Awards, has endured because it's also incredibly entertaining.
Here's a closer look at West Side Story and some of the surprising elements that make it one of the most memorable works of musical theater.
A dancer came up with the idea. Director Jerome Robbins, who first proposed the idea for West Side Story, was at the same time choreographer of New York City Ballet. As a result, dance tells the story of this muslcal at the sophisticated level of ballet, not only in obvious dance numbers like "Mambo!" but in narrative scenes of escalating gang tension and warfare. We see it from the opening “Prologue,” when rival gangs, the Jets and the Sharks, stake out their territory.


West Side Story was originally East Side Story. When they first conceived the show in 1949, Robbins, Bernstein and Laurents set their story on the east side of Manhattan, and gave it the working title East Side Story. They planned to stage the conflict between rival Catholic and Jewish groups.

However, this concept never gained traction, and the project foundered until 1955, when teenage Latin gang violence in L.A. made the news. Laurents then presented the idea of changing the conflict to involve Puerto-Rican versus white gangs on the then-grungy Upper West Side of Manhattan. All at once, the project took off.
In Bernstein’s words: “Suddenly it all springs to life. I can hear the rhythms and pulses, and -- most of all -- I can feel the form.”
Shakespeare and Sondheim. Most of us know that the show, with modifications, is a modern take on William Shakespeare’s tragedy Romeo and Juliet. But did you know that its tragic plot almost caused West Side Story not to see the light of day?
The show's original producer pulled out because she thought the story was too dark and would flop. Producer after producer turned it down. When Hal Prince and his co-producer finally swept in and raised sufficient money for West Side Story's first run, it was the first of Prince's many successful collaborations with Stephen Sondheim. Sondheim, then only 25-years-old, came on board fairly late in the process as lyricist for Bernstein’s melodies. Bernstein wrote about Sondheim: “What a talent! I think he’s ideal for this project, as do we all.”
Bernstein’s deeply felt Jewish heritage forms an integral part of the music of West Side Story. A basic shofar call, the Tekiah, provides the musical motif that many of the show’s most important songs are based on. The shofar, a hollow ram’s horn, is one of the world’s most ancient instruments, and is still played today in Jewish religious ceremonies during Rosh Hashanah and Yom Kippur. The motif is known in musical terms as a “tri-tone” (the interval of the augmented 4th.) In various forms, it can be heard in the opening “Prologue,” in songs like “Something’s Coming,” “Maria,” and “Cool.”
https://www.wrti.org/post/surprising-backstory-west-side-story

The Surprising Backstory to West Side Story

Conceived in 1949, West Side Story has a serious message that pleads for racial tolerance, delivered in unforgettable song and dance. People have been