Larry Kudlow: This is a lesson the left has never learned

LTC (Join to see)
735
23
4
7
7
0
Larry Kudlow: This is a lesson the left has never learned https://www.foxbusiness.com/media/kudlow-this-lesson-left-never-learned
I listen to Economist Larry Kudlow every day at 1400 Mountain Time M-F on Fox Business channel 113 through Sirius XM radio app on my smartphone.
He often says save America and kill the Democratic Woke Budget or Build Back Better( Not!) Bill.

He and I consider Democrat Senators Machin of WV and Sinema of AZ as heroes who saved America. He often says that the Cavalry is coming in November. He is referring to the midterm elections that's going to change everything in Congress. Better to have gridlock than econ 101 stupidity from the POTUS Biden and the incompetent minions in his woke/broke administration and left of Lenin Congress.

His show talks about the economy, Congress, Finance, Common sense and games this Administration plays with the Federal Reserve, Inflation, Democrat mismanagent in DC. He often has guest speakers who are former government officials from both parties. His show is informative and very business-oriented. 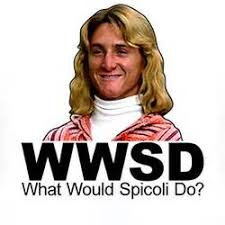 Kudlow: Save America, kill the bill, save Joe Manchin, and stop Putin

LTC Stephen F.
Edited 6 mo ago
Posted 6 mo ago
Thank you my friend LTC (Join to see) for posting a great meme What Would Spicoli do.
I concur with you and Larry Kudlow that Democrat Senators Machin of WV and Sinema of AZ are modern day heroes in standing up for common sense.
West Virginia Democratic senator calls on Biden to restore Keystone XL pipeline
https://www.youtube.com/watch?v=tuV0iODlZ6c